2016 Mobile World Congress was All About the Virtual Reality 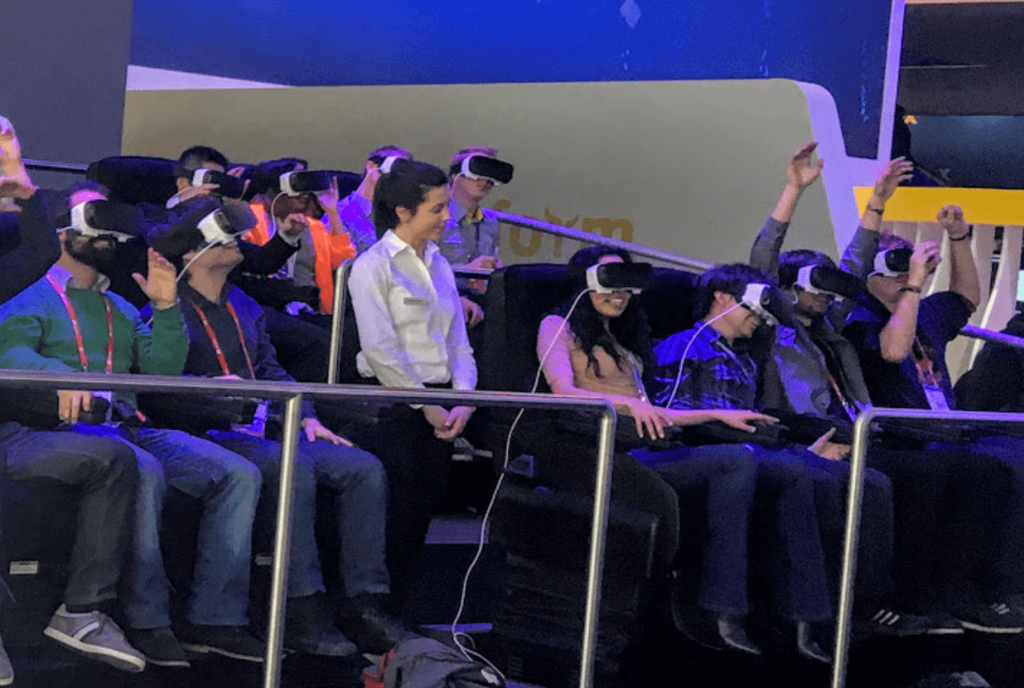 It seems that this is the year when we will officially reject reality. It’s no longer just an app for that, there’s also an entire virtual reality experience for that. While the official theme of the 2016 Mobile World Congress, held this week in Barcelona, was the absurdly broad, “Mobile is everything,” it was really about the virtual mobility of virtual reality that can take you anywhere from virtually nowhere.

As the start of all things Mobile World, Facebook chief Mark Zuckerberg said: “VR is the next platform.” For better for worse, it’s the next social network too.

Certainly the biggest name in Barcelona this week was Samsung. Not only did it introduce the S7 version of its flagship Galaxy smartphone, lines went on for hours at both their MWC booth and in Plaça Catalunya where they set up a pop-up store, all to take a virtual ride on Six Flags California’s Twisted Colossus. By the screams and laughter, it was clear that nothing seemed vertical as thousands virtually experienced the barrel roll inversions and near-vertical drop. 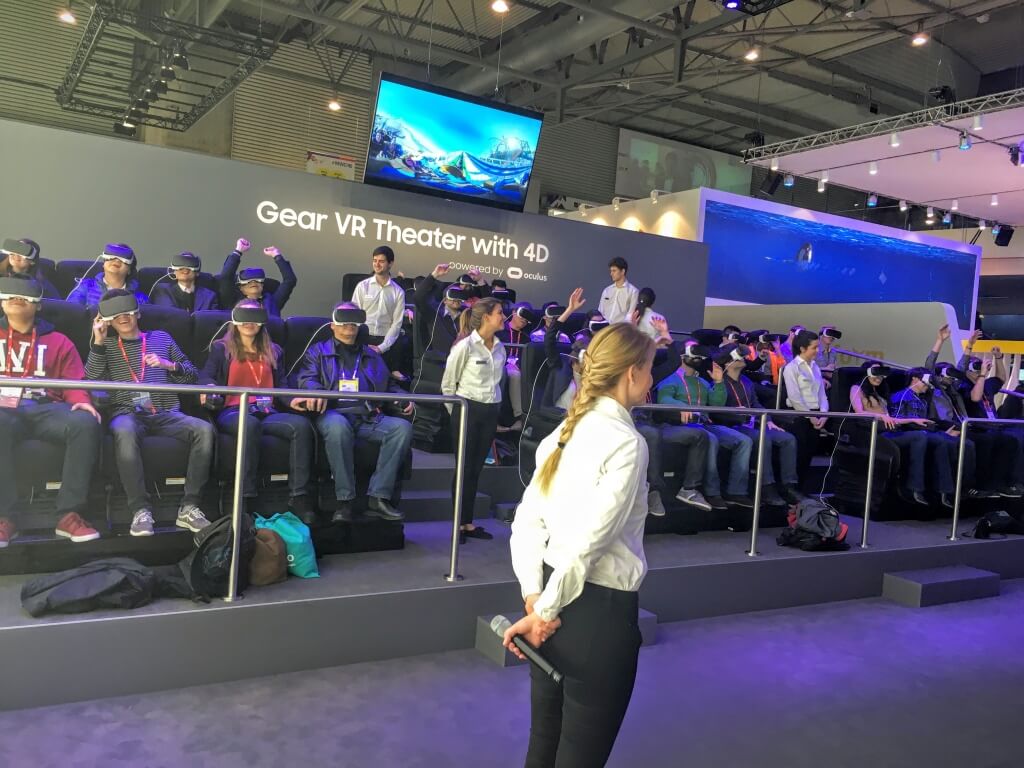 The ride was recorded on the adorable Gear 360 with 30 megapixels in dual cameras in 360-degree view ”because the world is not in one direction, the world is around us,” said Samsung’s Pranav Mistry

Once material is recorded on your Gear 360, anyone can watch it by just snapping a Galaxy smartphone (version Note 5 and up) into the light Samsung Gear VR and start watching. It costs around $150, plus, of course, phone and 3-D camera. The coolest part just might be, for those who wear glasses, it has adjustable lenses ala the eye doctor so you don’t have to bulk goggles on top of glasses to watch. 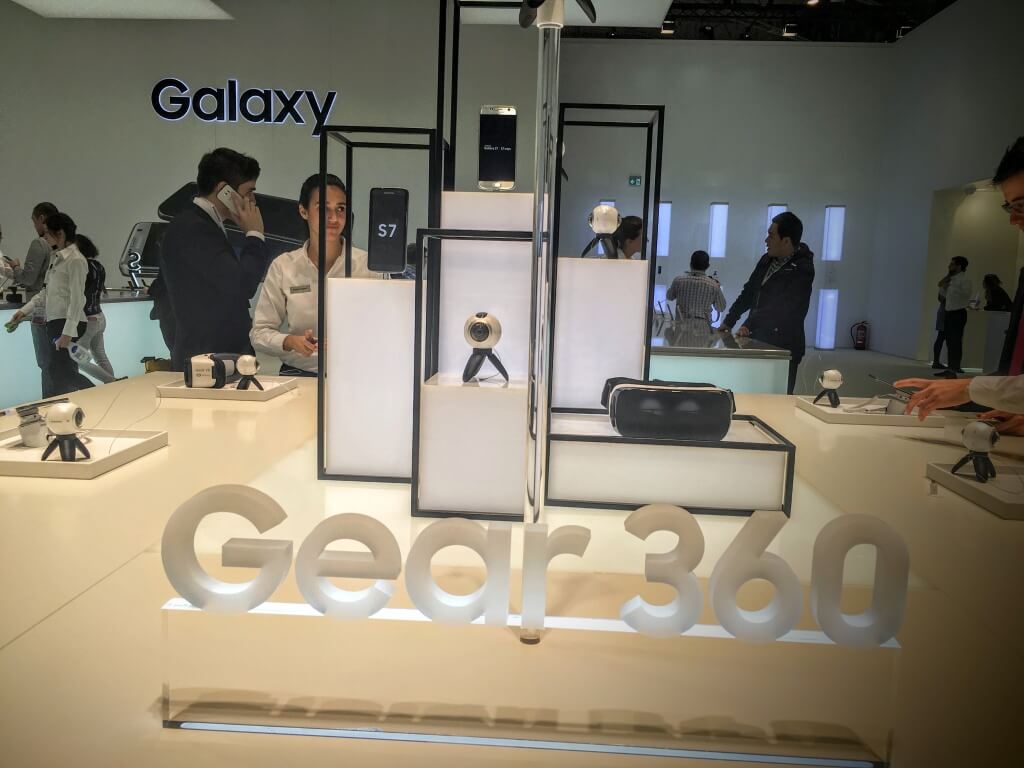 Of course, since it’s backed by Facebook-owned Oculus, the coolest part of VR might not be where we go, but who we can go with, as Zuckerberg looks to leverage it to create “the most social platform.”

But while Samsung’s cramming a roller coaster into a 20 by 10 booth was the shiniest of shiny things at this year’s conference, it certainly wasn’t the only VR to star.

While Gear 360 is priced for the average Jane, Peter Jackson may pick up a couple of Nokia’s OZO 360 video camera for Avatar II, with its eight lenses, high-definition, surround-sound microphones and a price tag of about $60,000.

HTC also previewed its Vive which launches next week and hits the gamer-who-has-everything sweet spot at $799. It comes with much clunkier hardware, connected to various cables and wireless controllers, and you have to install a pair of motion-tracking base stations. It seems promising but if the much cheaper Kinect didn’t take off, we’re not sure this one will.

The tourism arm of the Generalitat of Catalunya even got into the game by partnering with Whiplash, a one-person vomit-inducing party game that had people flipping upside down as they VR-toured Barcelona. 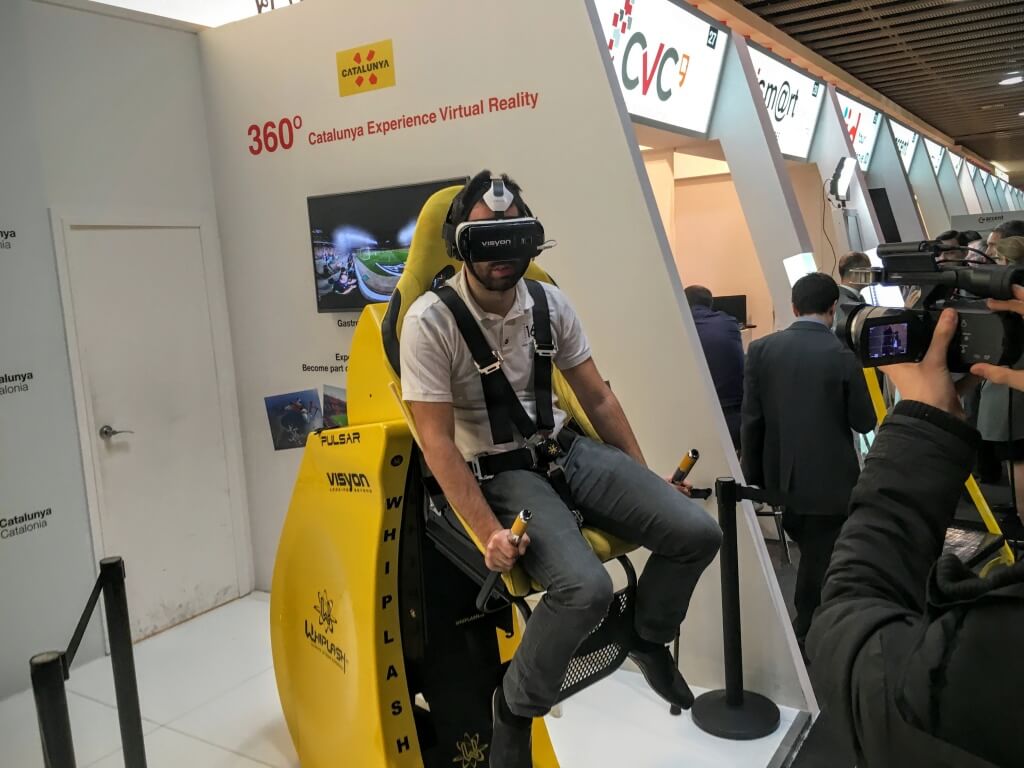 Virtual reality was seriously everywhere. While headed to the bathroom, I even ran into some dude simply walking around the conference wearing what I would classify as the VR equivalent of the selfie stick. You clip any smartphone into your VisualVizor virtual reality glasses — the same lenses you’d rock at an IMAX — and strap it onto a baseball cap. As you can see on this tester below, it makes Google Glass look suave, but, hey for $10 and a free IMAX movie, what have you got to lose? 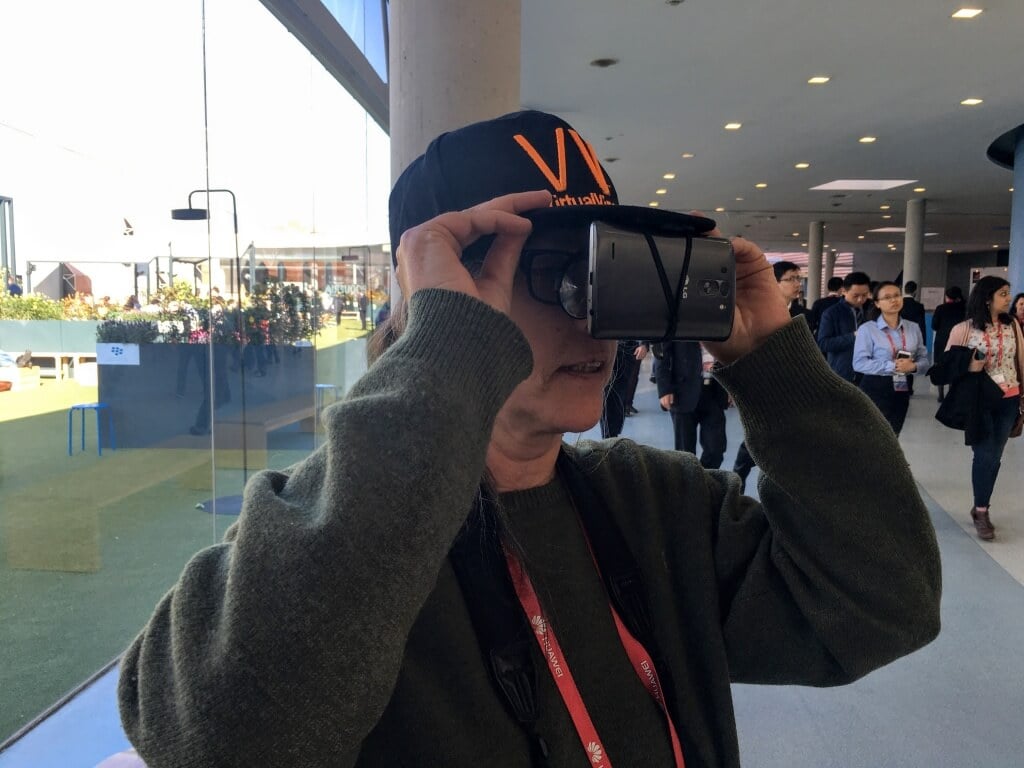 And it’s not just virtual, we’re augmenting reality too.

While virtual reality takes you to a whole other place, augmented reality has you looking right in front of you and seeing it in a different way, a la The Matrix.

I even watched someone playing a much quieter, less anxiety-inducing game of Jenga, a part of his augmented reality on stage.

Don’t forget the accessories and wearables that allow for our virtual experience to be totally hands off, like Hug Innovations‘ impressively intuitive smartwatch that follows normal human behavior and hand gestures for simple commands, like controlling the radio, playing a video game or keeping nurses’ hands off the most disgusting part of the operating room, the computer. 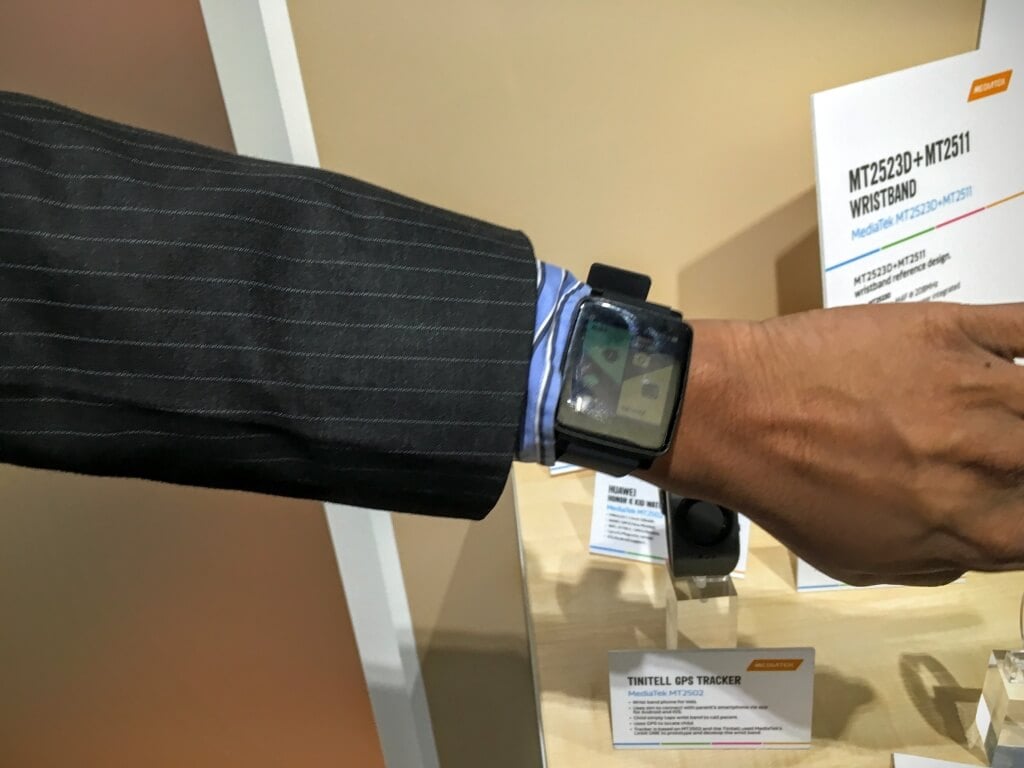 And of course, there’s Apple which is always ubiquitously absent at mobile’s largest convention, but we’d be remiss not to mention the rumors that they will have something big launching soon in the world of virtual or augmented reality.

While the gaming and travel industries are the first VR headliners, soon virtual and augmented reality will become more impactful than playful. In fact, the United Nations has already used VR in “Clouds Over Cidra,” where the life of a refugee is told through the eyes of a young Syrian girl at a camp in Jordan.

The possibilities of VR and AR seem endless and rather compelling. When the education system catches up to the technology, we could live vicariously through Neil Armstrong’s first steps on the moon or walk among the Great Pyramids. If the world’s top physicians were able to simulate the resources available in the most remote parts of the world, they could then teach those village doctors life-saving techniques, offering the next-best-thing to hands-on, real-time experience.

Or, like thousands of Mobile World Congress attendees, will we all start looking like oblivious idiots, flailing about, bumping into each other, and missing the real reality around us?

Jennifer Riggins is a culture side of tech storyteller, journalist, writer, and event and podcast host, helping to share the stories where culture and technology collide and to translate the impact of the tech we are building. She has been...
Read more from Jennifer Riggins
SHARE THIS STORY
RELATED STORIES
Entrepreneurship for Engineers: Avoiding Feature Bloat Learning Storage and Retrieval with a Hash Function A Platform Team Product Manager Determines DevOps Success Boost Customer Engagement with Real-Time Data Poisoned Lolip0p PyPI Packages
SHARE THIS STORY
RELATED STORIES
5 Security Principles to Guide Your DevSecOps Journey How New Sony AI Chip Turns Video into Real-Time Retail Data 2023 Web Tech Check-in: React Performance, PWAs, iOS Browsers How to Get Started Filling 3.4 Million Cybersecurity Jobs Generative AI: How Companies Are Using and Scaling AI Models
THE NEW STACK UPDATE A newsletter digest of the week’s most important stories & analyses.
The New stack does not sell your information or share it with unaffiliated third parties. By continuing, you agree to our Terms of Use and Privacy Policy.