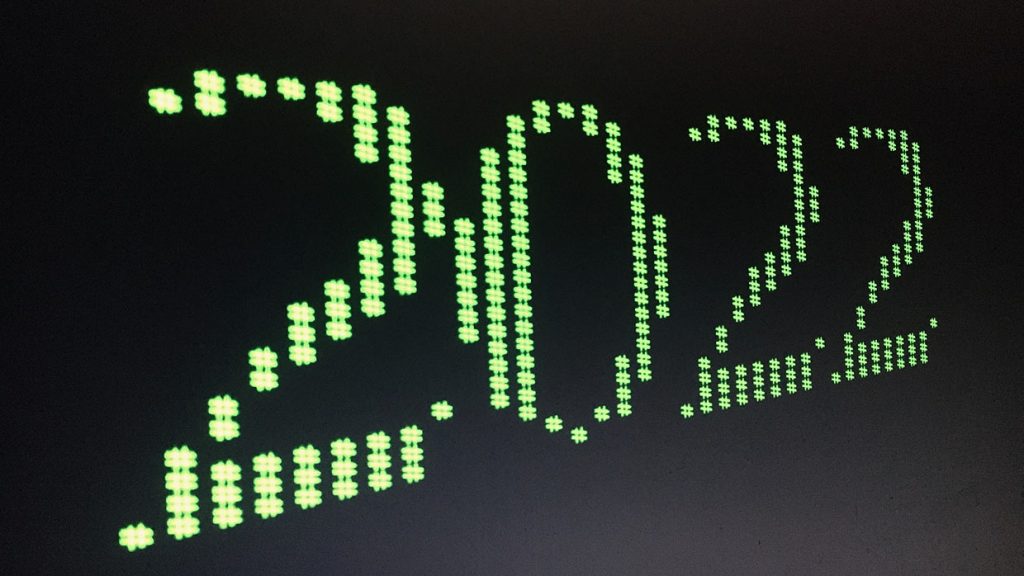 It’s been a year unlike any other — but how will our salaries be impacted in 2022? Have the disruptions of 2021 created any unexpected trends that could linger into the year to come?

Human resources consulting firm Robert Half, which has reported on salaries for more than 70 years, has released its own projections. In general, the findings of its annual salary guide reflect a continuing high demand for workers with experience in cloud computing, AI/machine learning, and data analysis (as well as cybersecurity and data privacy).

In addition, 52% of tech employers said they were adding new positions.

The survey also projects an average pay increase of 3.8% in 2022 — based on data collected this past summer, just as the U.S. inflation rate began climbing quickly, reaching a rate of 6.8% for the 12 months ending in November, the highest in nearly 40 years.

But some specialties are projected to see larger pay hikes than the overall average, according to the Robert Half report. The researchers are projecting a 6.9% increase in the average starting salary of database administrators, for example, and a 6% increase for frontend developers.

Earlier this year, the company created a detailed online survey, which was then conducted by independent research firms. Between June and July, it had collected responses from more than 2,800 senior managers — not just in technology, but also in areas like finance, legal, marketing and administrative support — at companies with at least 20 employees.

And in addition, the firm also surveyed more than 1,000 workers in mid-August. The results project starting salaries and employment trends for more than 500 positions, including several in the tech field.

So what else is the report projecting for the year ahead?

Of special interest is the report’s list of the 15 Highest-Paying IT Jobs, where besides network/cloud architect (and network/cloud engineer), there’s also a separate entry for the position of big data engineer. “Businesses need individuals who can transform large amounts of raw data into actionable information for strategy-setting, decision making and innovation,” stated a Robert Half blog post.

“These professionals typically create a company’s software and hardware architecture, and the systems people need to work with the data.” Salary midpoint: $141,500.

Also among the 15 highest-paying IT jobs is DevOps engineer, “the bridge between coding and engineering” (midpoint salary: $125,750). Elsewhere the survey listed cloud experience as one of the most in-demand skills (regardless of whether it’s AWS, Azure, Google). And two of the most in-demand certifications are AWS cloud practitioner and Microsoft Azure certifications.

There’s still plenty of demand for other kinds of developers. Another table also provided Robert Half’s salary guide for specific positions, broken up into categories like “web development” as well as “security” and “networking and cloud.”

The report showed demand has been especially high for software and applications developers. Here’s what candidates with above-average experience (and all the right skills) in the 75th percentile of salaries are earning for selected positions — compared to salaries in the lower 25th percentile (in parentheses).

This year saw workplaces emerging from lockdowns and looking ahead to the future — and Robert Half’s salary guide spots the signals loud and clear. Eighty percent of technology managers said turnover was increasing at their company; managers said they were hiring tech professionals “at or beyond pre-pandemic levels.”

In a video summarizing the results, Paul McDonald, Robert Half’s senior executive director said the company expects this increased hiring to continue into 2022.

Yet a full 96% of the tech leaders surveyed also complained that finding strong job candidates had become challenging.

“Sixty-six percent of U.S. workers that we surveyed feel very confident that they could find a job quickly in today’s marketplace,” McDonald said in the video, so smaller companies and larger companies end up aggressively competing for the same pool of talent. “For the coming year,” he added, “We suspect it’s going to continue.” 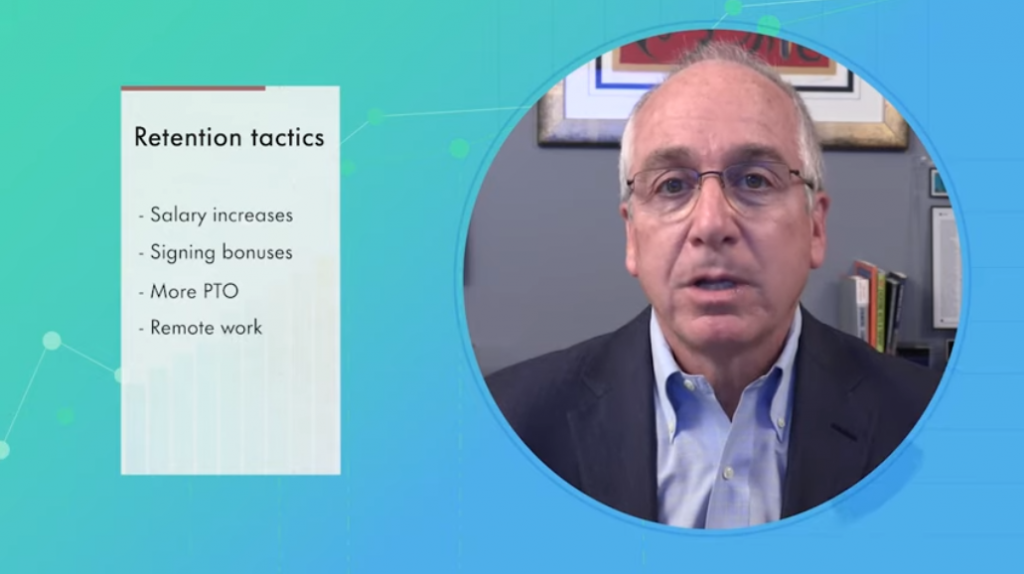 Now companies are trying various strategies to adapt. Perhaps inevitably, 48% of the technology leaders surveyed said they were now offering signing bonuses, while others have tried providing cash incentives and even unlimited time off.

And while the survey showed 51% of U.S. companies planned to expand hiring for permanent roles, it also found 38% planned to increase their use of contract labor in 2022. (Forty-five said they already used contract professionals as the majority of their staff.)

Interestingly, this is also a popular arrangement for workers. A full 39% of the workers surveyed by Robert Half said they wanted to pursue contract work (consulting or project-based) for their next career move.

No Raise? I Quit.

One Robert Half blog post announces bluntly that “workers want a raise — or they may walk … In a tight talent market, workers have more options and employers must offer competitive compensation, benefits, and perks.”

There are even statistics on how many workers would consider quitting without a salary increase — 31% — while even more workers said they felt underpaid (49%) and 46% definitely planned on asking for a raise.

And many workers don’t plan on returning to the office now that they’ve gotten a taste of working from home: One in three workers (34%) who are now working remotely said they won’t stay with companies that won’t allow them to continue remote work, the report found. “Workers also want flexible schedules, such as flextime and windowed work, and are leaving jobs if they don’t get them.”

Though for what it’s worth, the survey also calculated that employees prefer an average of three days a week of remote work.

In fact, 43% said they were attending more video calls than they had six months earlier. And the survey even found an “overall” feeling among workers that more than a third of those video meetings are a waste of time.

But the good news was that 53% of technology businesses said they’d base remote-worker salaries on where their company was located, rather than the worker.

The survey also identified perks most coveted by workers — as well as the ones actually being offered by employers.

“Eighty-eight percent of HR managers said their company has added new perks as a result of the pandemic,” the guide notes, citing things like additional paid family leave and childcare assistance, as well as mental health resources and wellness programs like gym memberships. (And of course, stipends for home-office equipment!) 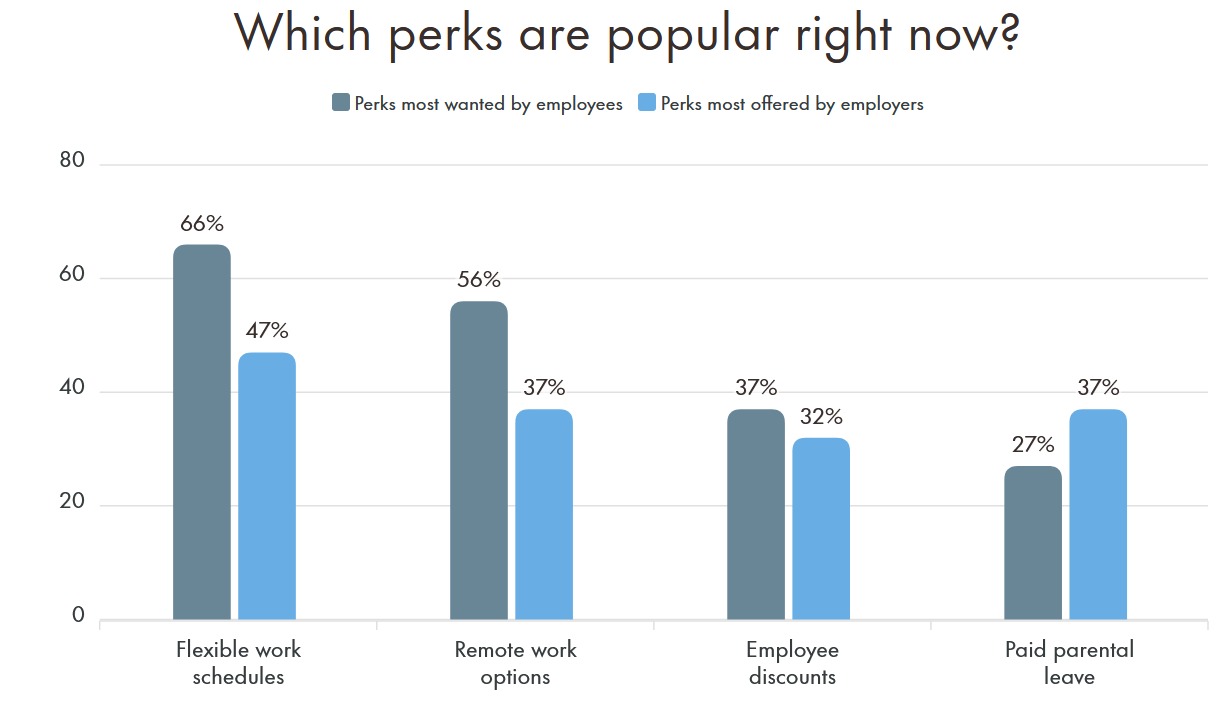 But in addition, “Savvy tech companies and teams reimburse workers for professional development,” the report suggested, “including certifications and noncredit college courses.” Such practices can not only include performance but also retention rates.

The survey found, however, that 51% of employees wanted a retirement savings plan — though it was offered by only 46% of the employers in the survey. 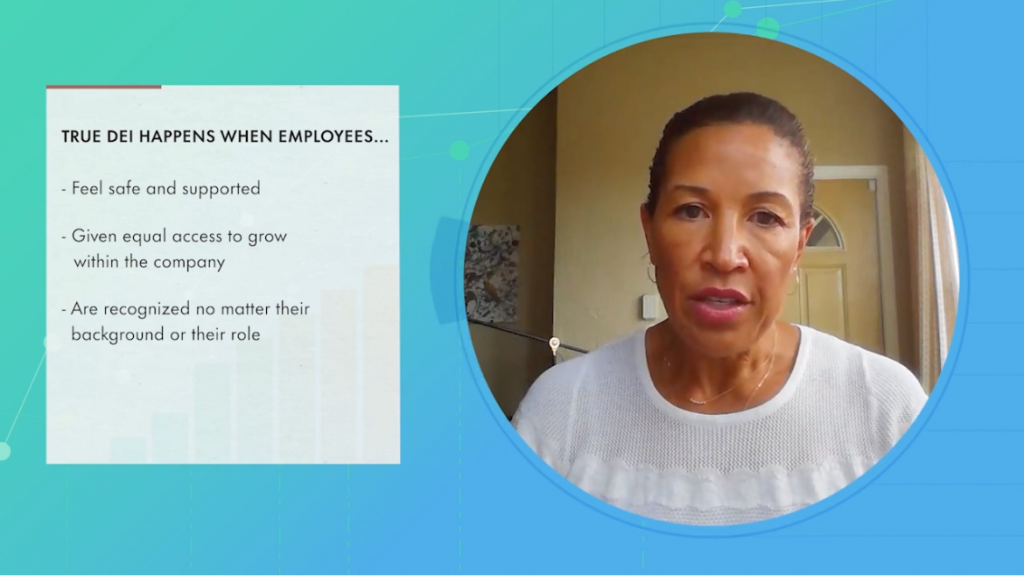 And 72% of the senior managers surveyed reported that diversity had increased in their leadership ranks over the past five years. Thirty-two percent are partnering with DEI groups when looking for candidates. 39% are increasing their DEI-related employee training. One in three are organizing DEI discussion groups.

It all offers an interesting look at the current thinking of workplace managers and workers as we head into 2022 — a year of greater flexibility for workers than ever but likely plenty of continued uncertainty.

Photo by Artturi Jalli on Unsplash.