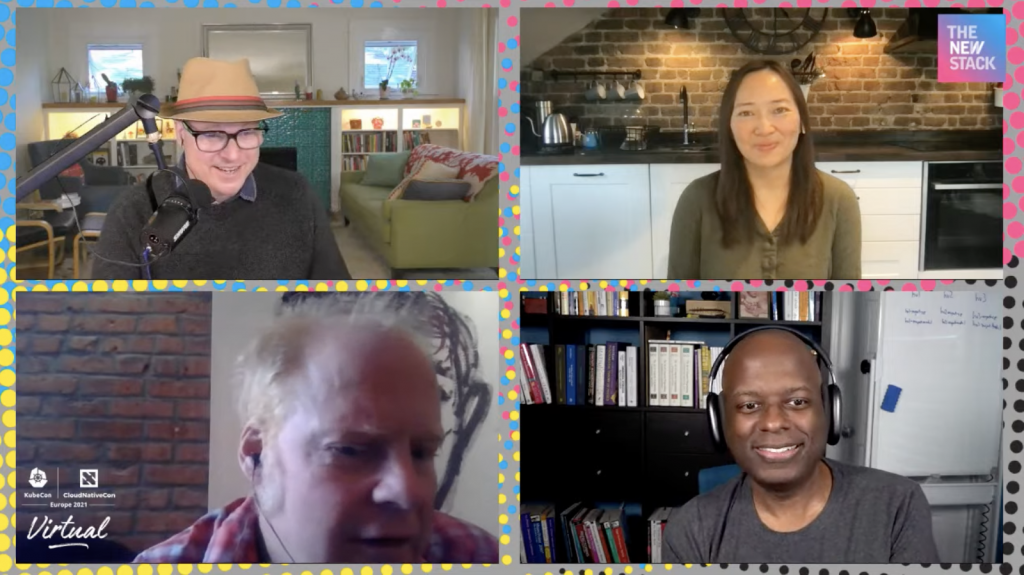 The adoption of GitOps, improvements to APIs and the increasing reach of  WebAssembly (Wasm) are influencing the Kubernetes developer experience. And these were among the themes at Cloud Native Computing Foundation‘s KubeCon + CloudNativeCon EU earlier this month.

Putting it all into context are hosts Alex Williams, The New Stack founder and publisher, and Joab Jackson, TNS managing editor, in this The New Stack Makers live event with featured guests Bryan Liles, principal engineer of VMware and Cheryl Hung, vice president of ecosystem, CNCF.

In a nutshell, one of the ways Kubernetes can be described is as an API service to allow workloads to run on commodity hardware or in the cloud, Liles said. In this way, Kubernetes functionality extends to networking, scheduling, security and other tasks. However, Kubernetes has become “so easy for people to spin it up on the cloud, that they assume that the ease of spinning up the clusters should match the ease of deploy — and unfortunately, there’s no way,” Liles said.

Many improvements in the developer’s experience can be attributed to advances in API options. With kcp —  a Kubernetes API prototype — it is now possible to implement a Kubernetes control plane abstraction on top of a Kubernetes control plane, so that “anyone hitting this will think to their own cluster,” Liles explained. “So, think about multitenant situations where I have different versions of software installed inside of my cluster — well, we can just install them into their separate tenant,” said Liles. “And now we can have multiple versions of the same thing, things we could not do in Kubernetes and now we have a different security boundary. This is amazing.”

Indeed, much of the beauty lies in how the API works and how it is possible to put abstractions in front of the API. “They look like the API, all your tools talk to it, but what is it talking to? Well, who cares?” said Liles. “It’s Kubernetes behind the façade, but now we get all this goodness more than ever. And now we have all the stability, and the world doesn’t have to worry anymore.”

Wasm is also seeing a widening reach well beyond its main original polyglot use to integrate JavaScript (JS), C++ and Rust and into a single runtime platform for web applications. Today, Wasm’s versatility is now extending to servers and backend applications — as well as to Kubernetes clusters. With Wasm, “whatever language you have, we can deploy it anywhere,” said Liles. “We don’t care about that anymore, which means that we can also optimize for it,” said Liles. “We can optimize for things and ways that we could not if you deploy your own binaries.”

For underlying support and as a way to implement more structure into the CI/CD cycle, GitOps continues to shine. “I think that you get some extremely nice properties out of being able to have all of your infrastructure declared within Git and having that audit log and traceability backwards,” Hung said.

However, GitOps remains a work in progress. “Honestly, I’ve actually only really seen good opinions and good feedback about [GitOps], and I actually would really like to hear a little bit more about some of the downsides, perhaps the areas where it’s not quite as well-developed,” said Hung. “Because on the whole, for pretty much every deployment I’ve heard of, I’ve heard really good things.”