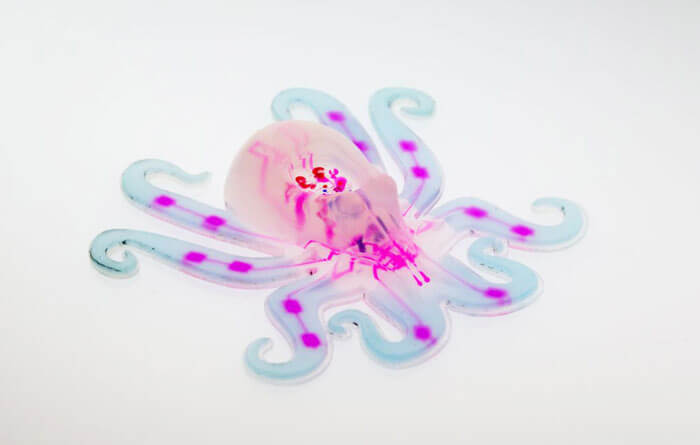 The stereotypical image of the hard-edged robot made of metallic parts is now slowly giving way to a new kind of soft robot, made of deformable materials that give it the ability to morph into different forms. Scientists and engineers in recent years have been working steadily on developing soft robots that are more versatile than their hard counterparts. Nevertheless, these early soft robots still incorporated some sort of hard components, such as batteries, circuit boards and other electronics, or were connected to an external control system.

But those limitations may now fall by the wayside, thanks to the charmingly named Octobot. Touted as the world’s first autonomous and completely soft robot, Octobot is the creation of Harvard University researchers, utilizing an innovative approach that combines 3D printing, molding and soft lithography fabrication techniques, and controlled with microfluidic circuits.

“One longstanding vision for the field of soft robotics has been to create robots that are entirely soft, but the struggle has always been in replacing rigid components like batteries and electronic controls with analogous soft systems and then putting it all together,” explained Robert Wood, a professor of engineering and applied sciences at Harvard’s Wyss Institute, and one of the authors of the paper published in Nature. “This research demonstrates that we can easily manufacture the key components of a simple, entirely soft robot, which lays the foundation for more complex designs.”

Watch Octobot go, and how it’s made:

One of the main distinguishing features of Octobot is that it is made completely out of soft materials like silicone rubber. The body itself is created by pouring silicone polymers into a mold. Special heat-sensitive inks are squirted by the 3D printer into this jelly-like substrate, which vaporize away when the bot is heated and cured, leaving a hollow, vein-like network that connects the head and extremities.

“Through our hybrid assembly approach, we were able to 3-D print each of the functional components required within the soft robot body, including the fuel storage, power, and actuation, in a rapid manner,” said co-author Professor Jennifer A. Lewis of the Wyss Institute in the press release. “The Octobot is a simple embodiment designed to demonstrate our integrated design and additive fabrication strategy for embedding autonomous functionality.” 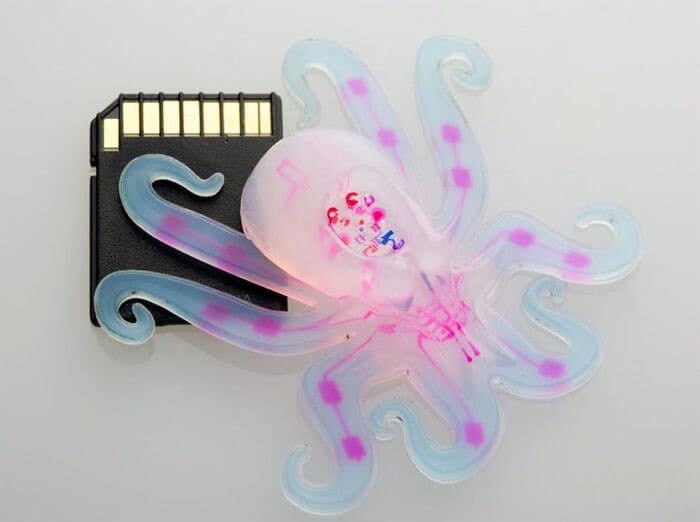 Not only are Octobot’s materials and mode of manufacture innovative, so is its source of fuel. To move its arms, it uses the bursts of pressurized gas generated from a chemical reaction involving a commonly found ingredient — hydrogen peroxide — rather than being tethered to an external source of power.

“Fuel sources for soft robots have always relied on some type of rigid components,” said Michael Wehner, a postdoctoral researcher and another paper co-author. “The wonderful thing about hydrogen peroxide is that a simple reaction between the chemical and a catalyst — in this case, platinum — allows us to replace rigid power sources.” 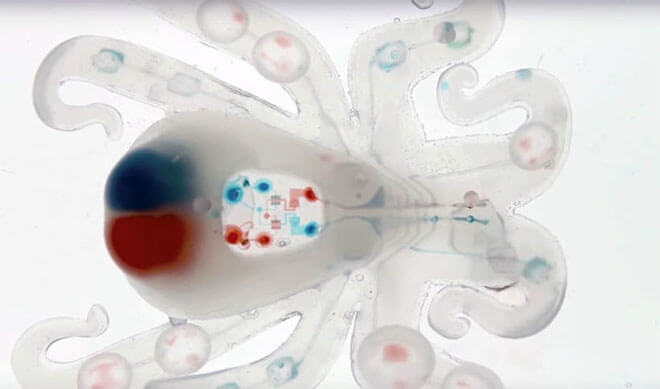 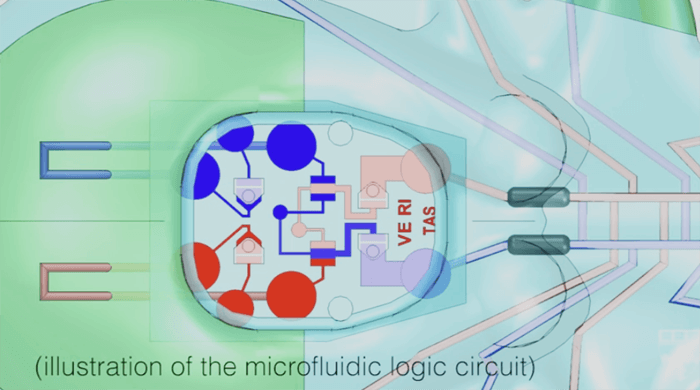 An “elastomeric” system of valves and switches in the brain help control the extension of the arms on either side. The 50 percent hydrogen peroxide fuel is sent into two reservoirs, which inflate and dispatch fuel into the rest of the microfluidic circuit, creating a cascading chain reaction of changes in pressure that results in movement. The liquid flow is self-regulated thanks to the inherent dynamics of the microfluidic logic circuit, which is essentially a soft version of a basic electronic oscillator. According to Nature, at this stage, the Octobot can operate for about 8 minutes on 1 millimeter of fuel.

You might wonder what’s the use of such a device, but soft robots will be useful in places where rigidly made robots cannot go, perhaps in tight crevices in recovery operations, or in collaborative work situations where they may be placed side by side in close contact with human co-workers.

In any case, the researchers are now planning to find ways to program the soft robot to react to stimuli or to perform specific tasks, perhaps by creating more complex microfluidic circuits and integrating flexible sensors into the mix. So while it’s not about to take over the world with its pressure-powered, mini-tentacled arms, the Octobot experiment proves that soft robots can be made differently with a combination of rapid fabrication techniques, and fueled and controlled by unconventional means.

Images from the Wyss Institute.

SHARE THIS STORY
RELATED STORIES
Google Brings Rust into Chromium Project Improve the Quality of Your APIs with Spectral Linting FAA Flight Cancellations: A Lesson in Application Resiliency Azure Went Dark How New Sony AI Chip Turns Video into Real-Time Retail Data
SHARE THIS STORY
RELATED STORIES
A Platform Team Product Manager Determines DevOps Success Qlik Plans to Acquire Talend. Is it a Data Management Double-Dip? Learning Storage and Retrieval with a Hash Function 2023 Web Tech Check-in: React Performance, PWAs, iOS Browsers 5 Security Principles to Guide Your DevSecOps Journey
THE NEW STACK UPDATE A newsletter digest of the week’s most important stories & analyses.
The New stack does not sell your information or share it with unaffiliated third parties. By continuing, you agree to our Terms of Use and Privacy Policy.