3D Printed Buildings Made By Robots for the Earth, Moon and Mars 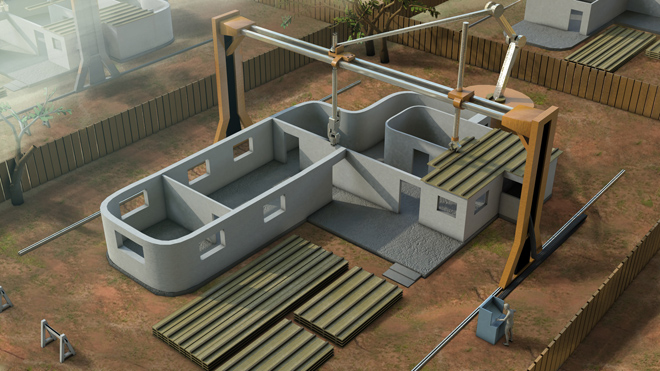 Many of us are already familiar with the various products of additive manufacturing or 3D printing, which range from the mundane like furniture and jewelry, to more specialized items like prosthetics. But 3D printing may have bigger fish to fry: several prototypes in recent years proffer the tantalizing thought that 3D printing could also be used to mass manufacture affordable housing quickly and cheaply, essentially changing the construction industry from a slow, wasteful process to an automated and cost-effective one.

Developed by University of Southern California professor Behrokh Khoshnevis, Contour Crafting is one of these 3D printing ground-breakers, which takes the basic premise of robotically controlled additive manufacturing and scales it up for habitable structures — and might even one day provide shelter on the moon, using substrate sourced straight from its surface.

Similar to its smaller cousins printing out layers of plastics, Contour Crafting utilizes a 3D printer that is mounted onto a portable gantry frame made of metal, allowing the printer head to move in all axes. This giant, relatively lightweighted, 500-pound contraption would “print” out architectural CAD models using a custom-designed extruder mechanism that spits out wet concrete, which keeps its form thanks to a special hardener. Layers of viscous materials are gradually built up to form hollow or solid-core walls that are exceptionally strong — up to three times stronger than one built with conventional concrete — and can still be customized to simultaneously add in plumbing and electrical fixtures, and even infrastructure like pipes. Both rectilinear and unusual curvilinear forms would be equally feasible. 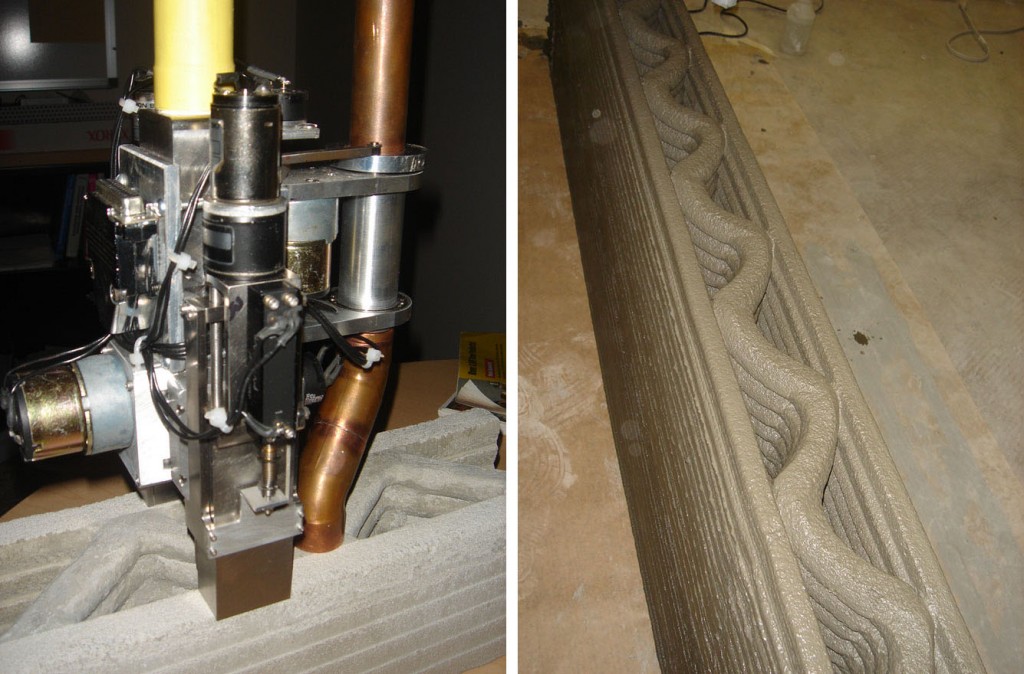 Construction time and cost are dramatically reducing using contour crafting; according to the website and NASA’s Tech Brief, cost is reduced by 30 to 60 percent and the building process is accelerated by “a factor of at least 50.” Construction related injuries — of which there are 400,000 annually in the United States alone — would be greatly reduced by using this kind of computerized construction method. Contour Crafting’s precise automation would also reduce construction waste, construction energy usage by 90 percent and carbon emissions by 70 percent — an enormous sustainable edge, considering that the existing construction industry emits 30 percent of global carbon emissions annually. Contour Crafting’s cost-effectiveness, speed and potentially lower environmental impact means that it would be also well-suited to emergency and high-quality low-income housing.

So far, Khoshnevis and his team have printed 6-foot high walls that are 4 inches thick, consisting of 6-inch high layers. Due to “lack of space and the appropriate construction permits,” larger contour-crafted homes have yet to be realized, but the technique has already received recognition, recently winning first place in NASA’s Create the Future Design Contest:

During the last decade and under academic grants we have demonstrated the feasibility of the concept and currently have a system that can build 400 sq. ft structures with solid core or corrugated core walls. Within two years, with sufficient investment, it should be possible to demonstrate 24 hour automated construction of a full 2500 sq. ft. structure.

So it’s no wonder NASA is interested in potentially adopting this kind of technique for future building on the moon; recent lunar soil experiments have shown that sulfur could be extracted and heated to create a suitable binder replacement for Portland cement, meaning that materials could be harvested directly from the Moon, rather than transported from Earth.

Of course, potentially disruptive technologies such as Contour Crafting do raise valid concerns about possible job losses in the industry. Khoshnevis however, likens this shift to the same one that occurred in agriculture, where technological innovations compelled former farmers to learn skills in new industries. The limited 60 to 80 year life cycle of concrete is another issue — making a compatible method of recycling another paramount question to address, with some suggesting the pairing of this additive technique with a robotic subtractive one like the ERO Concrete Recycling Robot.

Nevertheless, it’s mind-blowing to imagine the possibility that one day our homes and even whole neighborhoods might be robotically created with zero waste and in less than a day — and that even lunar and Martian colonies could be built in such a fashion. In an ever-evolving industry where resources are finite and still needlessly wasted, this revolutionary catalyst may be what the world and future space exploration is itching for.