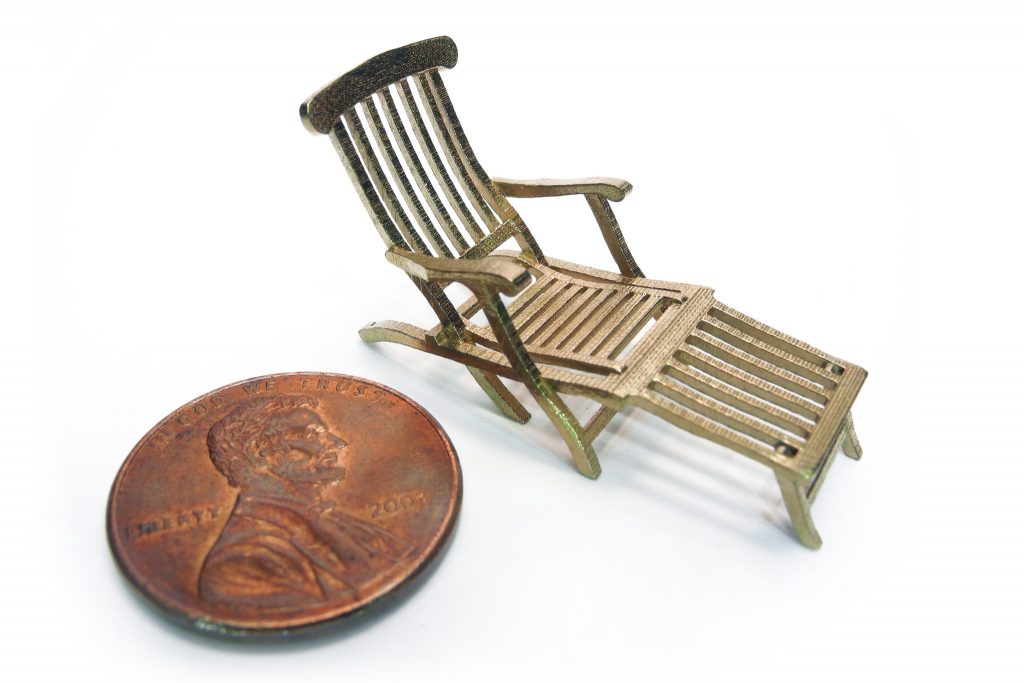 As additive manufacturing, or 3D printing, is becoming more affordable and accessible, it is similarly seeping into design worlds such as jewelry and miniature furniture and theater set building. Rather than just printing tiny objects for pleasure or decoration, 3D printers are also creating new options for the creative economy.

Jewelry designer Joshua Demonte’s architecturally inspired jewelry looks like miniature, wearable city structures crafted for the human body. But the human hand did not play a role in the fabrication. New York-based theater set designer Kacie Hultgren uses 3D printing to create miniature objects for imagined interior spaces, something that came about first as a way to create small-scale models of sets for theatrical productions.

“Manufacturing is becoming accessible to designers and smaller people,” says Dylan Reid, CEO of the 3D design company Dyo.co. “Now they can create on a scale that they couldn’t without having to deal with the upfront costs.”

“My background is in jewelry design, silversmithing and additive manufacturing,” says Demonte. It sounds like an odd combination, but it’s actually not at all. Demonte’s interest in additive manufacturing began during his sophomore year at Tyler School of Art in Philadelphia through a jewelry making class.

“Stanley Lethzian was the head of the program at Tyler back in the 1980s,” he said, “and he was the first academic craftsman to start adopting computer-animated design [CAD] into the more standard object-based analogue jewelry making craft. Through that program, I took many CAD classes and started 3D printing jewelry as an undergraduate.”

Demonte ended up in jewelry at Tyler not because of a passion for 3D printing. He wanted to be an animator, but couldn’t afford those schools. When he got into the Tyler School of Art, he chose the craft jewelry program, which was one of the first to start using CAD. In all of his making, however, Demonte learned that his work is based in a craft mentality.

“Reflecting on CAD and 3D printing, when I design objects, I attempt to design and create things that are suitable to that format,” he says. “I design objects on the computer using a program called Rhinoceros, a nurbs modeling software, and then take it through various fixing or analysis programs such as Magics or MeshMixer to make sure the file is okay for 3D printing.” 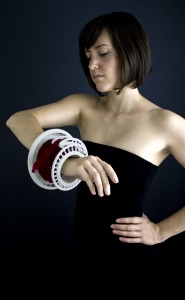 While completing his bachelors and masters at Tyler, Demonte found his niche in the realm of the subtractive method of computer numerical control (CNC) printing (in which one starts with an object and carves inward — in contrast to the additive method of 3D printing) and jewelry making. He bases his jewelry on digital fabrication, and continues to teach that today as a professor at Towson University’s interdisciplinary object design program. His jewelry may be created through a technology that is absent of humans — CAD drawings and 3D printed objects — but they can only be activated by the human body.

The majority of Demonte’s current body of work is done in selective laser sintering (SLS), which sinters nylon powder together; his works are made from gypsum and cyanoacrylate, using the Z Corp 3D printing technology.

Demonte replicates buildings or facades of structures in CAD, and then prints them out as 3D architectural jewelry objects. In this way, he investigates “the relationship of the body to actual architecture,” considering “how we orient the body within space.” Through 3D printing, his work establishes this new connection; except rather than a human exploring the Roman Coliseum, now they wear a 3D printed version of that around their wrist as an architectural accessory. The body becomes a vessel for adornment by architecture, rather than the body entering into architectural spaces.

As all artists know, it’s easy to get stuck if one keeps making the same thing. Demonte is no exception, and so he continues to explore new material options. Some of these include working with more familiar materials, such as wood, ceramics, and precious metals. Others consist of creating new works through more industrial processes like CNC milling or casting. And with new materials and processes come new challenges.

“The first challenge is being able to effectively design objects for the material processes you intend to use,” says Demonte. “When combining different materials, you then need to consider the challenge of assembly, or how materials will interact with one another. Am I going to weld them together, screw them together, or glue them together?”

Kacie Hultgren’s pathway into the world of 3D printing is in many ways the opposite of Demonte’s. Working as a set designer in the theater industry in New York, one of Hultgren’s jobs is building scale models. Hultgren had a background in CAD, and knew that designing and printing sets in 3D would save her time in the long run. 3D printing was not part of her process from the beginning.

“In 2011, desktop 3D printing was getting to a point where more than just a hardcore tech audience was tinkering with it,” she says.

“A lot of the scale model work I do is very tedious, and like most freelancers, I like getting more work in better time.”

With a CAD background, Hultgren realized she could save time by using 3D printing to enhance the more traditional model scale work that she was already doing. Her exploration into miniature furniture wasn’t something she anticipated becoming passionate about, however.

“I am usually working from some sort of source material, building it out in CAD and trying to work on the edge of the tech in terms of what I know is printable, how much detail can I add, how small can I make things, and [all the while using the] printer as a tool,” she says. “Once I do a lot of that, I have this huge library of furniture designs and other 3D objects.”

Rather than just make miniature furniture for an eccentric theater audience, Hultgren discovered there was a large dollhouse enthusiast community that was eager to buy her 3D printed furniture.

“I work in 1 to 24 scale (1:24), and the dollhouse community is working in 1 to 48,” she says. “That means a six-foot tall man would be an inch-and-a-half tall. There’s an amazing level of detail using commercial 3D printers that print the details you can’t see. Few people with dexterity are able to produce objects that small.”

Hultgren primarily uses a MakerBot Replicator for 1:24 printing; it utilizes economical materials, and is ready-connected to her desktop to be used at any time. When printing in the smaller 1:48 size, however, she tends to outsource the printing.

“My largest customer base works in 1 to 48,” says Hultgren. “The tiny furniture in this scale easily sits atop a penny.”

Because each type of material has its own limitations, including cost, design rules and number of people interested in buying the product, Hultgren considers first how to be most effective.

“I’m constantly asking myself if I could produce a model at 50% its size or 200% its size, without needing to make changes [to the design],” she says.

As Hultgren describes it, 3D printing works “a lot like a normal inkjet printer except instead of spraying ink the print cartridge deposits a fine layer of plastic that is hardened with projected light.”

She typically works with images from the Internet, especially sites such as eBay and auction sites where people are taking four or five views of a chair. Or she will visit a prop storage place, discover a piece of furniture, and document it. Then she imports these two-dimensional images into CAD, and transforms them into 3D on the other side. The finished products range from a beautiful modern dining set cast in bronze, to Queen Anne furniture 3D-printed in high-detail clear acrylic plastic.

“As a model maker, I’m most interested in future materials that have a paper-like surface, that blend in with the traditional matte board and basswood I use in my models,” she says. “There are already some options: using wood-like printing filament in a desktop FFF printer, or using Mcor printers that create models from sheets of actual paper.”

As additive manufacturing continues spreading, Dylan Reid of Dyo says that we will see even more democratization of the field.

“I’m really interested in 2D to 3D kinds of conversion,” says Reid. “The number of people that can do graphic design is far greater than the people who can do CAD design. We’ll see 3D printing become available on-demand in the same way 2D did through CaféPress and Zazzle, creating new revenue streams and designs.”

Images courtesy of the artists.

SHARE THIS STORY
RELATED STORIES
eBay: Betting on Open Source Is Great for Your Business It's No Longer about How You Write Code but How You Operate It Engineering Leaders: Switch to Wartime Management Now Collaborating with Internal Dev Experience and Tool Teams The Graph of Life in a Post-Relational World
SHARE THIS STORY
RELATED STORIES
Building an Internal Developer Platform Isn't Just about Tools Entrepreneurship for Engineers: Painkiller or Vitamin?  Case Study: How Dell Technologies Is Building a DevRel Team How and Why to Respond to Incidents the Right Way SANS Survey Shows DevSecOps Is Shifting Left
THE NEW STACK UPDATE A newsletter digest of the week’s most important stories & analyses.
The New stack does not sell your information or share it with unaffiliated third parties. By continuing, you agree to our Terms of Use and Privacy Policy.