49 Years Ago, Douglas Engelbart Predicted the Future with ‘The Mother of All Demos’ 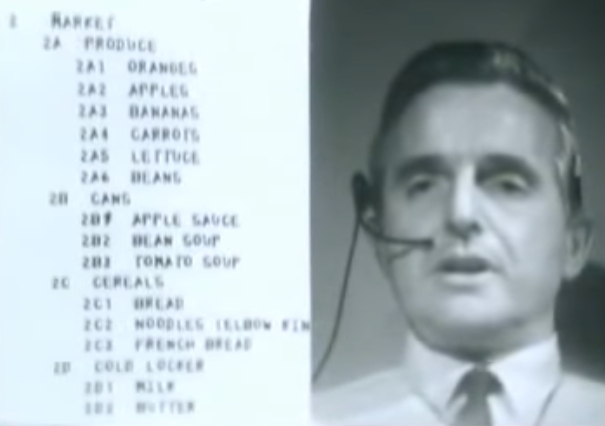 For IT conference speakers, making an offering to the Demo Gods has become almost customary, a ritual that reinforces the hope that their barely-functioning prototype will dazzle onlookers without crashing and leaving them proverbially naked in front of the audience.

No one, however, has ever had a tighter relationship with these demo deities than Douglas Engelbart, who on Dec. 9, 1968, laid out a long view of the future of computing in an astounding set of demos, one that included the mouse, Google Docs, the internet, and video conferencing. Engelbart and the work of his team laid out the path forward for all of the software, years before Xerox PARC even existed.

Silicon Valley loves its visionaries. From Steve Jobs to Solomon Hykes, we’ve congregated at the feet of those we feel have a better idea of where the future is going to be than us. Yet even among the Valley’s most hallowed names, Engelbart rises above all others. One name that symbolizes not just a vision but an uncannily vivid hallucination: a literal view into the future of computing which only now, almost 50 years later, is finally coming into existence.

Today, we are living in Engelbart’s world. It’s just a shame few people realize it.

The Stanford Research Institute, (SRI), served as just such a place back in the 1950s. Corporations called on SRI to help with problems ranging from removing tallow from soap to designing an electronic number reading system for processing checks. The Disney brothers called on SRI to analyze the potential for their dreamy vision of Disneyland.

SRI grew quickly in the 1960 thanks in large part to the Augmented Research Center founded by Douglas Engelbart. DARPA and with funding approved by J. C. R. Licklider, one of the early pSRI’s ARC was up and running in 1963. One device which heavily influenced the formation of the ARC’s original mission was the Semi-Autonomous Ground Environment or SAGE system. SAGE was a mission defense system which presented information to the user, who could then act upon it. The user interface involved an early light-pen style system, which allowed the user to select items on screen with a gun-like pointing device.

Licklider saw in SAGE the potential for greater human/computer collaboration through better interfaces. While ARC was formed with an initial project of integrating a monitor into a massive, proprietary mainframe, Engelbart soon commissioned one of his team members, Bill English, to research human interface devices.

English gathered everything he could find that qualified as such in 1963 but found most interfaces to be lacking in user-friendliness or intuitiveness. To rectify this, Engelbart drew a schematic for a small wooden box with two rotors and a wire to connect it to a computer. It was eventually named the “Mouse.” Despite it being invented almost on-the-spot, it outperformed all other pointing devices English tested at the time.

The mouse itself is a perfect example of the SRI ARC method of doing things. Most of the outlandish and outrageous ideas formulated at ARC were so advanced they wouldn’t become relevant to mainstream computing until decades later: the mouse wasn’t a real market factor until 1984, 21 years later. Yet this is the sort of vision fostered by this free-thinking research environment. And the mouse was just the beginning.

Engelbart saw computers as tools to augment human work. At the time, the idea of an individual computer being used by a single person for their own specific work tasks was akin to the idea of a baseball stadium being used by one player. This is evident in his early work with the Air Force, where Engelbart searched for methods of providing access to computers to multiple users at the same time.

When he started this quest, computers were basically single user devices, but not in the friendly desktop sense: Rather, they could run one program at a time, and the user had to carefully load said programs on paper tapes or cards. The idea of having multiple people using the same computer was just silly since the devices usually only had one tape reader and no keyboards or monitors.

Engelbart devised a system for hacking multiple users into a single user machine, however: he built a system that allowed a document to read in via paper tape, then edited via a second punch tape loaded afterward. This enabled a user to edit a document with the paper tape puncher, instead of requiring the whole computer.

Engelbart went on to design more text editing systems, and in 1962 he produced a framework for what he considered to be the basics of a computing system for augmenting human work. Engelbart named his systems the oN-Line System, using NLS as its abbreviation. He also designed the oN-Line Text System and the Off-Line Text System, text editing applications for business and military users.

At the time, computers were giant, room-filling devices that required herds of people to maintain, use, operate, and clean. IBM was still maintaining in 1963 that the world market for computers was around 100 to 1000 devices total. Maybe 10,000.

Engelbart and his teams saw through this wisdom of the day. They saw a future where not only were users paired with single computers but where those computers were able to talk to each other and exchange information. Perhaps they could even allow the users to work together, despite great distances between them.

To this end, they set about building the personal computer, though they did not call it that, nor did many pick up on this at the time. The oN-Line Systemor (NLS), was a revolutionary hardware and software solution that included a mouse, keyboard, chording keyboard, Internet connection, and a monitor. Much of this sounds like standard issue today, but in 1968, when the NLS was first demonstrated publicly, it was the first time all of these elements had been brought together. Heck, even monitors were still a new idea for computing at the time.

Mother of All Demos

While all the aspects of the NLS were impressive at the time, what will really knock your socks off is the fact that this computer was demonstrated live, on-stage in 1968 running a collaborative, graphical text editor between the San Francisco demo location and Stanford University, over 30 miles away.

Engelbart and his team performed their famous demo on December 9, 1968, at the Association for Computing Machinery/Institute of Electrical and Electronics Engineers (ACM/IEEE) Computer Society’s Fall Joint Computer Conference in San Francisco. The demo lasted almost two hours and featured Engelbart navigating through every aspect of the NLS. His calm voice is the antithesis of the modern demo keynote speaker: he’s demonstrating the technology, not trying to sell it or hype it or prove that it’s the future.

That huckstering was not needed. What was shown was so revolutionary that the audience must have known it was seeing the future demonstrated live, and in person. Engelbart encounters few errors or frustrations, and even humorously jousts with his Stanford counterpart, battling with the on-screen cursor and explaining that the team enjoys jousting like this from time to time.

Many of the other UI and graphical advancements of the NLS were eventually recreated at Xerox PARC, a research facility that made good use of SRI alumni, and people whose lives had been changed by seeing the demo, like Alan Kay. The invention of graphical windows, drop down menus, cursors, and all the other trappings of a mouse-driven operating system were all laid out first in the NLS, and taken up by other projects afterward.

While the NLS advanced UI design by decades in a single demo, many of the technical achievements underneath this demo were to continue impacting the industry today. Some of the ideas demonstrated for the first time in the Mother of All Demos include the hyperlink, video conferencing, dynamic file linking, revision control, and the ability to interact with another user on the typed page via cursor and text.

In the demo, Engelbart demonstrates the workflow of the future. Documents, written collaboratively with other users who are miles away. The demo features mostly drop down menus and GUIs, not a command-line interface. It’s an easy-to-use, eminently communicative and collaborative platform built around people, not mathematicians.

Engelbart’s vision of a collaborative work environment mirrored his views on computer technology in the workplace. As systems designed to augment human cognition, the focus was on bringing workers together, instead of on separating them and leaving them alone.

For the next three decades, developers would become increasingly isolated from each other and from the businesses they worked for. the 80’s image of a basement full of geeks in cubes cranking out bank code was the path most enterprises took during those days.

And yet, all along, Engelbart’s vision remained in the background, waiting to be rediscovered. One could almost blame YouTube for the resurgence of appreciation for Engelbart: seeing the demo makes it much more real and meaningful.

Only in the last decade or so have we come to finally see everyone on the Internet having access to the types of tools Engelbart envisioned. Microsoft has brought collaborative real-time editing into Microsoft Word in it’s Office 365, and tools like Cloud9 and Codenvy have brought this type of workflow into the IDE.

From a different angle, one could even view pair programming as an Engelbart invention: it’s just that Engelbart’s team was doing it over the Internet before half of Pivotal’s current employees were even born. it’s even more humorous to think that for years, instead of using technology for these collaborative editing sessions, developers have just been sitting together at a single keyboard.

It does take time for technology to take hold in the market, and Engelbart’s work can be understood to be so far ahead of its time that it was destined to remain only half-realized for decades. But now that we finally exist in a world where real-time collaboration can take place over digital work, it’s time we spread that vision to all aspects of computing: from DevOps to development, to business analysis: working together it much easier when it can be done online. And that’s why the Mother of All Demos is, perhaps, still the most important video in computing history.

Alex Handy is the founder and director of the Museum of Art and Digital Entertainment, a 501c3 non-profit video game museum located in downtown Oakland, California. The MADE preserves our digital heritage through playable exhibits across over 30 systems, and free programming classes for kids. The MADE also undertakes software preservation work, such as its relaunching of Habitat, the first virtual world, released in 1986 for C64. Habitat is now back online as Neohabitat.org.

A 20 year veteran technology journalist, Alex Handy cut his teeth covering the launch of the first iMac. His work has appeared in Wired, the Atlanta Journal Constitution, and The Austin American Statesman. He is also the founder and director...
Read more from Alex Handy
SHARE THIS STORY
RELATED STORIES
How We Manage Incident Response at Honeycomb The Power and Ethical Dilemma of AI Image Generation Models Why Your Code Sucks: Common Excuses for Bad Programming How Jit Builds a Platform Engineering Mindset in the Cloud Why 'Explainable AI' Can Benefit Business
TNS owner Insight Partners is an investor in: MADE.
SHARE THIS STORY
RELATED STORIES
Wellspring of Creativity: Why Public Domain Matters How We Manage Incident Response at Honeycomb 2022 in Review: AI, IT Armies, and Poems about Food CES 2023: Robots, Astronauts, Schwarzenegger and Flying Cars Entrepreneurship for Engineers: Avoiding Feature Bloat
THE NEW STACK UPDATE A newsletter digest of the week’s most important stories & analyses.
The New stack does not sell your information or share it with unaffiliated third parties. By continuing, you agree to our Terms of Use and Privacy Policy.