Predictions about the near future of internet technology, from a developer perspective. Featuring Web3, metaverses, iOS browsers, and more.
Dec 27th, 2021 11:17am by Richard MacManus

As another year draws to a close, it’s time for that most dreaded of online media articles: the predictions post. In my case, predictions about the near future of internet technology from a developer perspective.

In the tech world, prediction posts are particularly fraught because things change so quickly — and many times with a bewildering lack of logic. Who would’ve predicted that “Web3” would become the defining catchphrase of 2021? Even the most bullish crypto VC would not have made that prediction one year ago (the face of Web3 at a16z, Chris Dixon, did not use the term on Twitter until July 2021). Who also would’ve predicted that a startup would launch a metallic orb that scans people’s eyeballs in exchange for cryptocurrency? 2021 was a crazy year.

1. The Crypto Market Will Correct

At this point in time, December 2021, it’s unclear whether the crypto market — now known as “Web3” — is at a market peak equivalent to 1999, or whether it’s at the very beginning of its run like the web in 1993. Either way, I’m predicting a market correction in 2022. Here’s my reasoning:

My main critique of Web3 currently is that nothing useful has been built using crypto and blockchains, other than tools for speculation like crypto exchanges and NFT marketplaces. The technical infrastructure of Web3 is both flawed and also not as decentralized as many crypto proponents claim. On the other hand, this same argument could be used to prop up the 1993 comparison — when the web was also immature and not ready for the mainstream.

But given the lack of viable products in Web3, my contention is that the value of this market is wildly inflated right now. Remember that the first wave of Dot Com IPOs, starting with Netscape, didn’t kick off until the second half of 1995. That was a point when web platforms were fast maturing, and had attracted attention (and intense competition) from big tech companies like Microsoft and Oracle. But what is the Web3 equivalent of Netscape or Yahoo? Perhaps it’s Coinbase, but only because millions of people are using it to speculate on cryptocurrencies.

All this leads me to conclude that the crypto / Web3 market is due for a market correction next year. If it turns into a full-on crash (which is much harder to predict, but could happen), then we’ll see which Web3 companies are the real deal. On the positive side, there may well be a future Amazon.com among them — I’m not discounting that.

2. Apple Will End Its Browser Engine Ban on iOS

As noted in my top stories of 2021 post, the pressure is now on Apple in relation to mobile browsers. In June, the UK’s Competition and Markets Authority (CMA) started a market study into mobile ecosystems, focusing on Apple and Google, and this month it released its interim report. The CMA noted in regards to the browser ban, “As a result of the WebKit restriction, there is no competition in browser engines on iOS and Apple effectively dictates the features that browsers on iOS can offer.”

One of my sources, who had input into a report submitted to the CMA, thinks that Apple will essentially be forced to open up to external browser engines in 2022 — not just in the UK, but in the US and other markets too. Here’s what this person told me:

“I find it extremely hard to imagine a scenario where third-party browsers are unbanned on iOS for the UK, without having a dramatic impact in other countries. The US regulators are going to go: looks like it’s fine on the security/privacy front in the UK, so we want you to do the same thing here. I can’t see Apple even contesting it.”

If you’re a Chrome user on iPhone (as I am), this is a potential development to get excited about.

Now to something more prosaic, but essential to the web’s continued health. Google’s guidance for web developers and publishers, called Core Web Vitals, became a key part of its search ranking mechanism in 2021. There are three main aspects to CWV:

According to Alex Russell, a Partner Program Manager on Microsoft Edge and prior to that a senior engineer on Google Chrome, some web development tools and frameworks “have been selling speed and failing to deliver.” So he predicts that we’ll soon see “a new metric for responsiveness.” He’s not sure if this will drop in 2022 or 2023, “but even the previewing of what they’re working on is going to continue to shift the messaging that SEOs give to buyers, and shift investments accordingly,” he told me.

This will particularly impact the FID measurement, which Russell says “was known-bad at the time of CWV’s launch.” As Google repairs that, he said, “it’ll leave a lot less room for frameworks that play games or try to excuse bad results.”

4. Serverless Will Join Containers as a Mainstream Dev Practice

In other words, 2022 could be a tipping point for serverless — perhaps the first step to becoming the future of cloud computing. Analyst Simon Wardley created an excellent diagram to map out the trajectory of serverless over the coming decade: 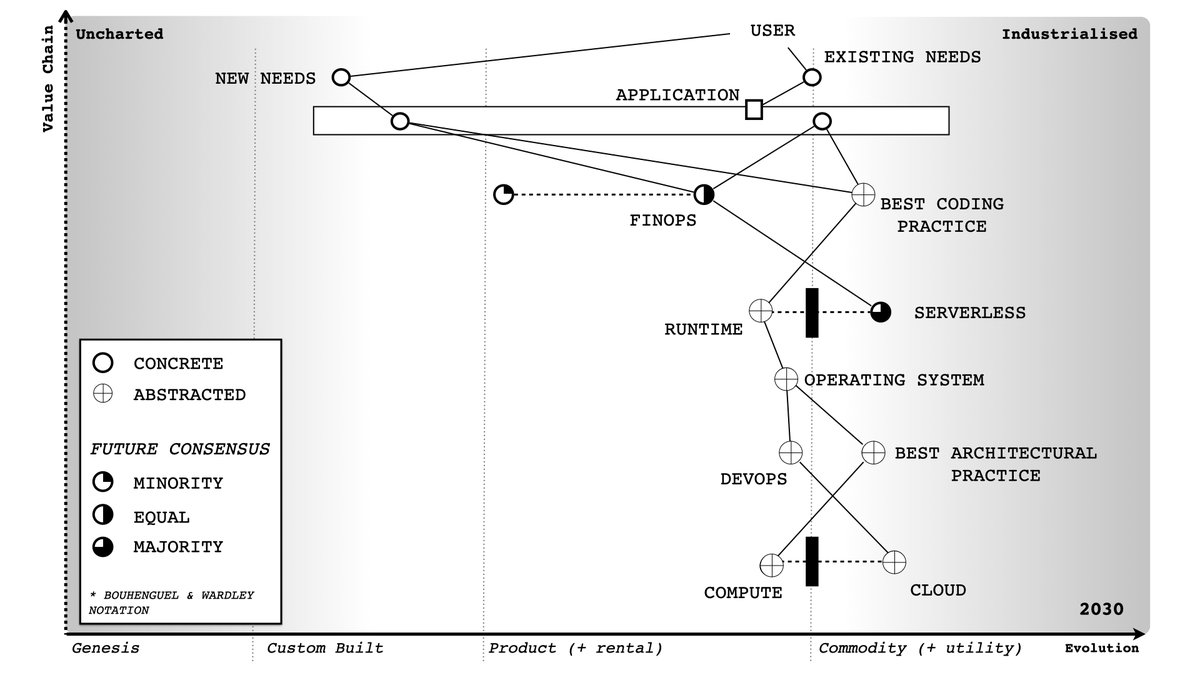 The map indicates that nearly everything in computing will get abstracted away by 2030, and one of the only “concrete” things left will be serverless.

5. A New Metaverse Startup Will Launch in 2022 and Usurp Meta

Scoop: In 2022, a new metaverse social network called Doppel will come out of stealth mode and publicly launch. It will cause a sensation and be the tipping point for metaverse technology, due to a breakthrough VR headset that will cost no more than $100 and a stunning 3D virtual world (completely web-based). Millions of people will sign up within months, driven by FOMO and a mass migration of TikTok influencers. By the end of the year, tens of millions of people will be going “invirt”* every day, to work and play inside Doppel.

* invirt: to be in virtual reality. Think of invirt as the VR equivalent of online.

Meta’s stock price will crash due to what analysts will call “the Doppel Effect.” Facebook will lose tens of millions of daily active users, as people increasingly spend all their time inside Doppel.

Okay… in case you haven’t guessed by now, this prediction is fake news. Doppel was a Facebook-like VR company in my 2016 SciFi novel, Presence, set in the year 2051. I included this in my predictions to show how perilous and slightly ridiculous the act of making tech predictions can be!

It’s fun to predict the future, though, so let me know your own takes for 2022.

Richard MacManus is a Senior Editor at The New Stack and writes about web and application development trends. Previously he founded ReadWriteWeb in 2003 and built it into one of the world’s most influential technology news sites. From the early...
Read more from Richard MacManus
SHARE THIS STORY
RELATED STORIES
Platform Engineering Won’t Kill the DevOps Star Java's James Gosling on Fame, Freedom, Failure Modes and Fun 2022 in Review: AI, IT Armies, and Poems about Food Why Your Code Sucks: Common Excuses for Bad Programming Golden Paths Start with a Shift Left
SHARE THIS STORY
RELATED STORIES
Wellspring of Creativity: Why Public Domain Matters How to Get Started Filling 3.4 Million Cybersecurity Jobs The Power and Ethical Dilemma of AI Image Generation Models Golden Paths Start with a Shift Left CES 2023: Robots, Astronauts, Schwarzenegger and Flying Cars
THE NEW STACK UPDATE A newsletter digest of the week’s most important stories & analyses.
The New stack does not sell your information or share it with unaffiliated third parties. By continuing, you agree to our Terms of Use and Privacy Policy.