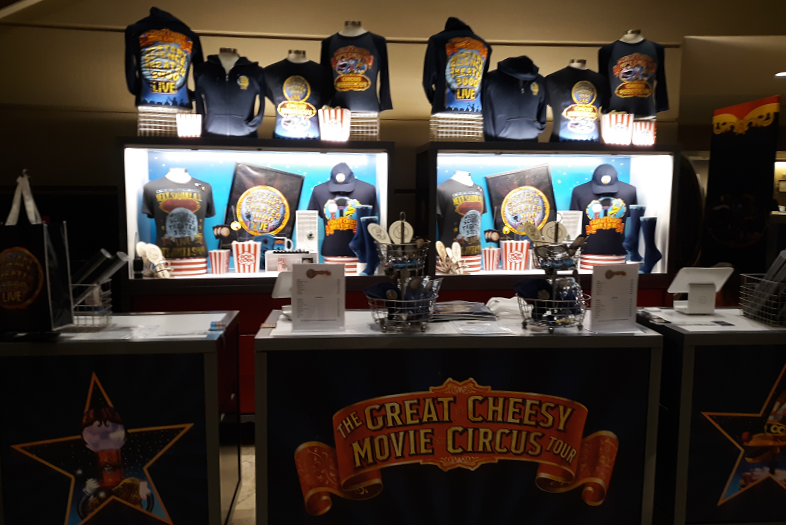 Thirty-two years ago, Joel Hodgson was a 20-something comedian heckling movies with robot puppets on a local Minneapolis TV station. But within 12 months the show he created started a 10-year run on two different cable TV channels (Comedy Central and the Sci-Fi channel).

It was the decade when the masses would discover the internet, and San Francisco’s KQED now argues that the show “Mystery Science Theater 3000” has “presaged the way we consume entertainment today” in that long-gone era before snappy tweets and YouTube rants. There was always something timelessly geeky about Hodgson’s refusal to passively consume mass media movies, and in his interview with KQED Hodgson cites the “nerdy cult” that grew up around the show and describes meeting those fans now in person. “You get a few people who are a little socially awkward, but I’m awkward in my own way, so it kind of works out.”

As our media ecosystem continues to change, classic “MST3K” episodes are now even being streamed on Twitch. But what happens when a pretend robot scientist decides it’s time to retire? Does Hodgson’s pending blast-off come with any oddball lessons for the tech world about community building, legacy systems, following your passions, and the cultural proclivities of geeks?

And what was it like being surrounded by his loyal fans at one of his final live shows?

Closer to the Heartland 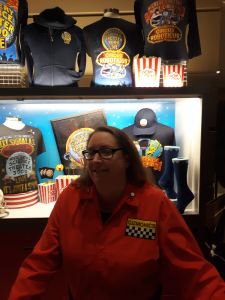 After shows in San Jose and San Francisco, the cast had traveled closer to California’s Central Valley heartland, at the 1,200-seat Mary Stuart Rogers Theater in Modesto, California.

I sat next to a whole family — mother, father, and son — who’d driven 50 miles to the show from Valley Springs, California. (Population: 3,553). “We’ve been watching them from the beginning,” the mother told me.

Later stops will include Boise, Cheyenne, Salt Like City, and Omaha.

Everyone got into the spirit — even the gift stand vendor dressed in an orange uniform identifying her as an employee of Gizmonics Institute (Hodgson’s fateful original employer on the long-running TV show). Do they ever make you watch terrible movies, I asked her.

“So many,” she played along, adding “Don’t ever let Joel pick the movie. It’s weird.”

And soon in the auditorium, the lights went down… 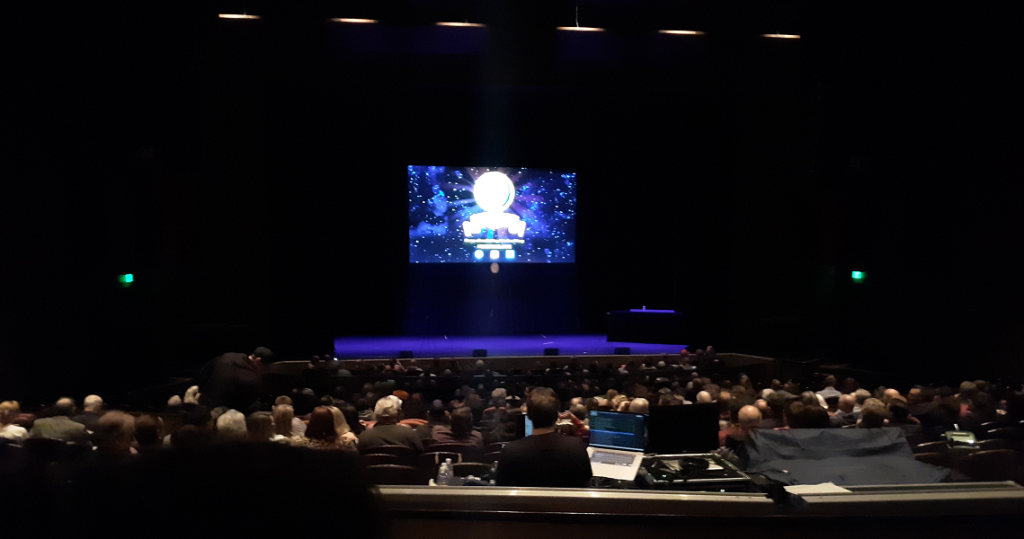 At the time, this was the all-time record for the most ever raised for a film on Kickstarter. Netflix eventually picked up all the new episodes, and for 2018 agreed to fund an additional six-episode season. Movies heckled include “Ator, the Fighting Eagle” and “The Day Time Ended.”

But in many ways, Hodgson was just returning to his original roots. In 2018, Hodgson told The Houston Chronicle how as a teenager he’d built puppet robots from thrift-store junk — and how at college he’d loved the cheesy movies they’d shown. “[W]hy wasn’t somebody making a bigger show out of these things?” he’d thought.

“So I tried to design an efficient comedy-delivery system.”

He’d fatefully named one robot Tom Servo, after the “Servotron” vending machine at the Southdale shopping center in Minneapolis — and named the other robot Crow, after a friend of a friend in college, according to an interview on the official MST3K fansite. With a little help from his friends, somehow it all passed through the Cuisinart that is Hodgson’s brain, and by the mid-1990s the show’s cable TV incarnation had received an Emmy nomination for its writing — two years in a row.

“Cable television was still new then, and not many took the fledgling medium seriously,” explains the program for one of his live shows…

Though it continued to run until 1999, Hodgson had left “Mystery Science Theater 3000” by 1993, partly because he was uncomfortable with performing and fame, according to the official MST3K Faq. Geeky to the end, Hodgson then worked with his brother as executive producers of The Discovery Channel’s “Everything You Need to Know,” and had an occasionally-recurring part on the TV show “Freaks and Geeks” — as a disco clothing salesman.

But in a world where your fans on Kickstarter can crowdsource a massive comeback, and with an auspicious 2015 change in the ownership rights to the show, the way was eventually cleared for Hodgson to begin touring the country heckling bad movies again — and this time, with his original “Mystery Science Theater” robot puppets.

As he approaches his 60th birthday, Hodgson has now announced that “The Great Cheesy Movie Circus Tour” will be his final live tour.

On with the Show

As the show in Modesto began, Hodgson himself stood alone on the stage with a red electric guitar singing his old show’s theme song. He introduced his familiar robot pals Tom Servo and Crow, who was jumping around on a pogo stick. “Everyone lost their minds when Kermit rode a bike in “The Muppet Movie,” Crow said enthusiastically.

Hodgson pointed out that the audience can see Crow’s dressed-in-black puppeteer in the dim light behind him. Miffed, the robot complained to his puppeteer, “You had one job…”

Hodgson then introduced the audience to his latest evil scientist tormentors, Pearl Forrester and her clone Cynthia, quickly adding that “for budgetary reasons, they’re puppets now.” But then actor Emily Marsh appeared as another new evil overlord, “Mega Cynthia,” teleported directly to this Modesto California stage “because science.”

Soon it’s time to watch this evening’s campy movie — a 1986 film, “No Retreat, No Surrender,” they describe as “If you took ‘Rocky,’ ‘The Karate Kid,’ and ‘The Outsiders,’ took away all the good parts, and added paint thinner.” It involves the ghost of Bruce Lee instructing a teenager for his climactic showdown against a gangster’s own Russian martial arts expert (played by a young Jean-Claude Van Damme). Wikipedia tells us the film’s director went on to direct “Lethal Weapon 4,” the original X-Men movie, and six films starring Jet Li. But Hodgson and his talking robots aren’t impressed.

In some cases, Hodgson and his robots seem keenly aware that their movie was filmed in another time. When the family in the film moves to Seattle, Tom mimics their teenaged son saying of their new garage, “Hell yeah! I’m going to found Apple Computers in here.” And later, as the same teenager despondently tosses aside a stack of magazines, Tom shouts “Someday they’ll invent the internet, and we won’t need magazines anymore.”

When the movie paused for circus-themed skits, the audience applauded as Crow rode a unicycle. He joked later that “In the future, all circus acts will be done by robots.”

Hodgson heckled the whole 84-minute movie while facing towards the audience (and away from the screen) — apparently by using a script in his lap. You could spot Hodgson drinking from a water bottle — and once, Emily Marsh even took over for him, taking her place between the robot puppets. But they never let up from their rapid-fire delivery of jokes. At one point the robots made didgeridoo noises. At another, they supplied the Popeye theme…

But when the movie was over, Hodgson was gone — leaving behind only a plaque for his puppet friends to remember him by. “To whom it may concern,” it begins… But then it segues into a familiar quote:

“The world is a circus if you look at it the right way… Every time you pick up a handful of dust, and see not the dust, but a mystery, a marvel, there in your hand…”

It’s a quote from the 1964 movie “7 Faces of Dr. Lao,” which had starred Tony Randall as the magical ringmaster of a mysterious traveling circus. But MST fans also recognized it as the quote Hodgson had left behind — on a plaque — when he’d first left the series back in 1993.

“Hey, it’s my favorite movie, so sue me,” he’d told his robot friends as his rocket pod had disappeared into space…

“He did it to us again,” grumbled a robot puppet on the Modesto stage.

But needing another human host, they turned to Marsh to be in charge of Hodgson’s robot friends.

And then Hodgson returned to the stage for a curtain call, graciously introducing all of the show’s hard-working actors and puppeteers.

“I’m turning 60 next month,” Hodgson told San Francisco’s KQED. “My whole job now is to work with the brand and get it ready for the next guy.”

SHARE THIS STORY
RELATED STORIES
Kathleen Booth, Creator of the First Assembly Language The Graph of Life in a Post-Relational World New Book Identifies 26 Lines of Code that Changed the World AWS Brings AI/ML Training to Community, Historically Black Colleges Case Study: How Dell Technologies Is Building a DevRel Team
SHARE THIS STORY
RELATED STORIES
What Is a Sociotechnical Knowledge Map and Why You Should Care eBay: Betting on Open Source Is Great for Your Business Building an Internal Developer Platform Isn't Just about Tools Low-Code Tools Improve Devs' Work-Life Balance, Survey Finds Tackling 3 Misconceptions to Mitigate Employee Burnout
THE NEW STACK UPDATE A newsletter digest of the week’s most important stories & analyses.
The New stack does not sell your information or share it with unaffiliated third parties. By continuing, you agree to our Terms of Use and Privacy Policy.