A Great Introduction to Docker, and Where It’s All Going 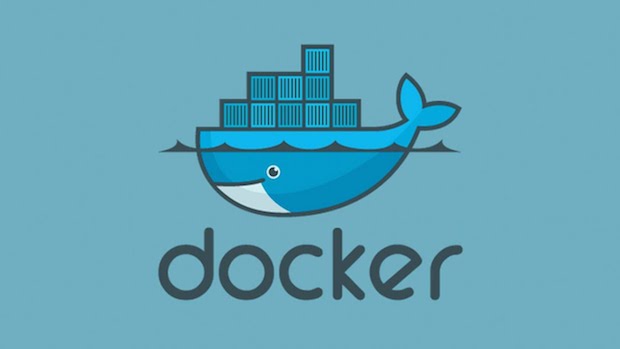 I’ve been following the evolution of Docker since shortly after the initial release of the project in March 2013. My earliest Docker-related memory, albeit a vague one, was of being briefed by Solomon Hykes, the project’s creator, at Cloud Connect Santa Clara the month after the project’s release. I mention all this only to say that I’ve sat in on my fair share of Docker presentations and briefings, including several at Docker-the-company’s recently held, first-ever DockerCon.

It was with this experience, or perhaps in spite of this experience, that I sat in on a Docker presentation by Nicholas Weaver, principal cloud architect for Intel’s Cloud Platforms Group, at the Intel Developer Forum last week. Suffice it to say that my hour was well spent; Nick’s talk, “Bare-metal, Docker Containers, and Virtualization: The Growing Choices for Cloud Applications” was perhaps the best I’ve heard thus far on Docker and containers, and I learned quite a bit.

One of the things I thought Nick did a particularly good job of explaining is what I’ll call the “intellectual history of Docker.” If you’ve been following Docker for even a short time, you’ve probably heard that Docker is “just Linux containers.” It seems that VMware, Red Hat and other large companies who Didn’t Invent Docker™ seem intent on drilling that idea into your head.

Yet, clearly, Docker is in fact about more than just Linux containers. But if you’re not a hard-core Linux admin, as I’m not, you might not know exactly how to draw the distinction.

Well, Nick did a really good job of explaining what exactly a Linux container does, what they’re good and not so good at, and some of the container-based innovations that led up to the invention of Docker, including Google’s lmctfy project (Let Me Contain That For You), which I hadn’t previously heard about.

With an overview of Linux containers under our belt, and an understanding of their pros (faster lifecycle and limited overhead) and cons (configuration complexity and weaker security isolation), we were ready to dive into, and really understand, what Docker brings to the table. Fortunately, Nick had a slide, or ten, for that. 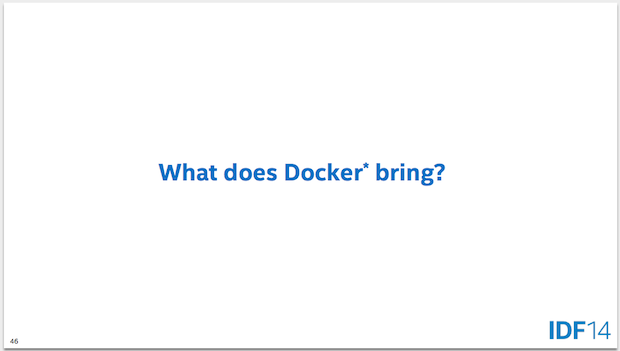 He went on to explain that, in spite of the hype, what Docker really does is not magic, but rather some pretty straightforward, but extremely useful, innovations that make containers useable by mere mortal developers. 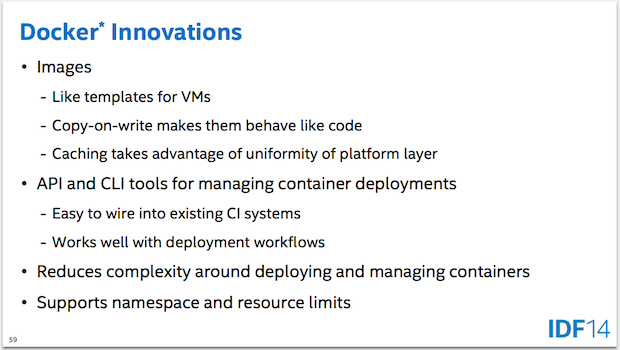 Nick ended his talk with a discussion on containers and security. (If you attended his talk, you now know better than to talk about ‘Docker and security’), and how VMs can be used to complement containers by offering more hardened isolation between tenants.

He closed with a brief discussion of some of the ways Intel hopes to enhance the experience of using containers, including enhancing security—by ensuring that containers can take advantage of its Advanced Encryption Standard New Instructions (AES-NI), Trusted Execution Technology (TXT), and Software Guard Extensions (SGX)—and improving performance and flexibility—by allowing containers to take advantage of its Virtualization Technology (VT) extensions, enabling better container performance and simpler container implementations.

Or, even better, you should join Nick and I at the upcoming Cloud Connect Summit at Interop in New York City, where I’ll be emceeing and where I’ve invited him to speak!

Nick will be delivering a keynote on Thursday morning, October 2nd on “The Post-Cloud: Where Google, DevOps, and Docker Converge,” where he’ll share his vision for where all this heading. Here’s an overview of his talk:

The cloud technology landscape is shifting. We have a mixture of dead ends and new roads. New concepts like containers, DevOps, PaaS, and more are altering the way we look at cloud computing. Nicholas Weaver will strip away the magic and talk about how these concepts expose the next evolution of private cloud. One that is built on lessons learned by hyperscale companies like Google but attainable by the private cloud 99%.

If you can join us, I’m sure you won’t be disappointed. If you do decide to attend, be our guest and use the promo code SPEAKERDISCOUNT for 25% the off on-site registration cost.