The biggest technology news stories of the year — everything from Elon putting the boot in, shoeless crypto kings, and legless avatars.
Dec 19th, 2022 11:24am by Richard MacManus 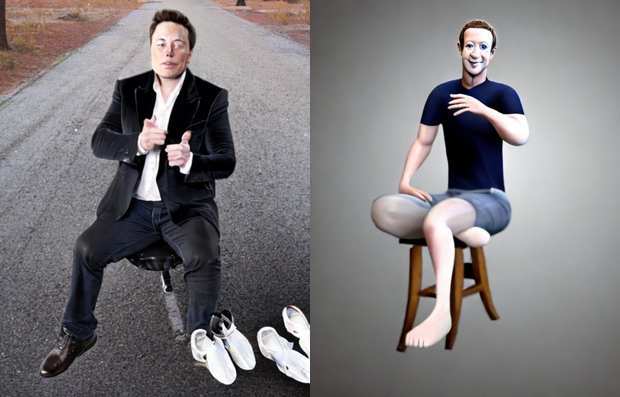 Last week I presented my top internet technologies of the year. This week I’m going to review the top stories of the year. Believe it or not, there isn’t a lot of overlap. A newsworthy story in the tech industry often isn’t about the best technology. It could be hype or controversy that makes it a big story, it could be a massive pile of money being handed over, or maybe it’s a story that is unintentionally hilarious. This post covers all those bases! Plus, I have the token news story that actually celebrates a worthy technical achievement.

P.S. hopefully the headline will make sense by the end of the post!

Let’s start with the biggest story of the year, certainly in terms of noise…

What more is there to say about this train wreck in progress? Ever since Elon Musk walked into Twitter HQ in late October carrying a kitchen sink (for meme purposes), it’s been a steady flow of Techmeme headlines for the new Twitter landlord. 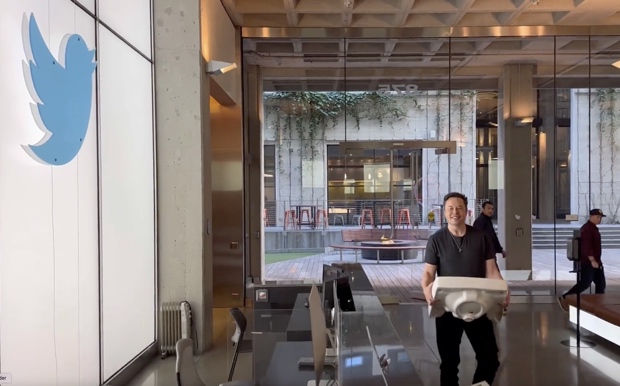 We may look back in years to come and view the Musk takeover as the tipping point for federated social media. But in the here and now, it’s hard to overlook the negative impact this has had on large groups of people: most of Twitter’s employees were fired, Twitter’s third-party developers were screwed (yet again), huge numbers of historically under-represented people who had found their voice on Twitter were driven off the platform.

Never mind the kitchen sink, then, this story is a tragedy in many respects — certainly not the Monty Python-esque comedy Elon Musk is trying to make it into.

2. Sam Bankman-Fried: Not Helping Web3 Cause

Many of us saw it coming in 2022: a big cryptocurrency firm would surely, at some point, be discovered to be doing something dodgy. But this is one of those stories that a novelist would struggle to make sound believable.

Here’s the rough outline: a young man who hadn’t even been born when Tim Berners-Lee invented the web, who graduates from MIT with a degree in Physics, starts a crypto hedge fund in 2017, then starts a crypto exchange in 2019, becomes a billionaire on paper, declares his allegiance to a philanthropy fad called “effective altruism,” turns up to business meetings in shorts and bare feet … and then suddenly his companies implode due to accusations of “mishandling of customer funds,” which eventually leads to his arrest in the Bahamas.

If you handed that story into your creative writing school as an end-of-year assignment, you’d be laughed out of the program.

Sam Bankman-Fried is expected to agree to extradition to the U.S., according to a person briefed on the matter, as he faces charges that he orchestrated a yearslong fraud culminating in the collapse of his cryptocurrency exchange, FTX.https://t.co/tt2AGQMCNj

What impact will Bankman-Fried’s downfall have on the Web3 ecosystem, which has also plummeted in value this year? Trust in our platforms is so important, as we also learned with the Elon Musk fiasco, and the SBF story further erodes the trust that many people have in cryptocurrency (the foundation of Web3).

3. The Merge of Ethereum

It wasn’t all bad news for Web3 this year, though. In September, the second most valuable cryptocurrency, Ethereum, moved from the environmentally damaging proof-of-work (PoW) consensus mechanism to the energy-efficient proof-of-stake (PoS). In a project nicknamed “the Merge,” Ethereum first brought together the two consensus mechanisms, and then dropped PoW completely once PoS had taken over.

Happy merge all. This is a big moment for the Ethereum ecosystem. Everyone who helped make the merge happen should feel very proud today.

It had been a long-running project and the subject of various memes over the years, most directed at Ethereum’s quirky creator Vitalik Buterin. But credit where it is due, the project pulled off a high-risk switch in the technical architecture of Ethereum — all without a hitch. You may still not like crypto or Web3, but you have to admire that the new solution is far less damaging to the environment.

4. Figma Acquired by Adobe for $20 Billion

In September, Adobe acquired Figma, the trendy web-based collaborative design tool, for about $20 billion — one of the most significant internet M&A deals over the past twenty years.

The kind of interactivity Figma enables used to be only possible using a plug-in tool like Flash — which of course Adobe acquired too, back in 2005 when it bought Macromedia. But whereas Flash was a proprietary technology that operated as a browser plug-in, Figma was built using web standards; and in particular WebGL (Web Graphics Library) to handle rendering.

The big question going forward is whether an open source design tool can rise and compete with Adobe. The news was also significant because it raised the stakes for other web standards-compliant tools, particularly in the developer IDE product category (a.k.a. Cloud IDEs).

I like to end these posts with a less serious story — remember last year’s metallic orb that scanned your retina in exchange for crypto? It was from a company named WorldCoin, co-founded by OpenAI’s Sam Altman. He has wisely moved on to bigger product launches this year (see: ChatGPT). Indeed, the last time Altman mentioned WorldCoin on Twitter was October 2021.

Another founder hoping an embarrassing product launch gets swept under the carpet next year is Mark Zuckerberg. In August, he posted on Facebook that Meta was launching its virtual reality world, Horizon Worlds, in France and Spain. His post was accompanied by an image of a legless avatar that looked like it was created in the 1990s, along with very basic drawings of the Eiffel Tower and the Sagrada Família. 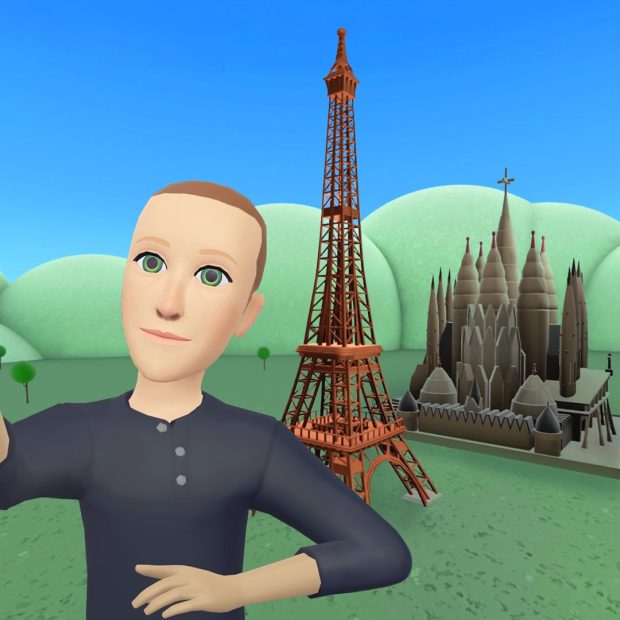 Zuckerberg was roundly mocked online, particularly for Horizon’s legless avatars, and shortly after he promised “major updates” coming soon to Meta’s avatar graphics. This update seemed to come in October, at Meta’s annual developer conference, when Zuckerberg showed a video that featured avatars with legs. He was unclear on when these would be released into Horizon Worlds, however. Later, it emerged that the video wasn’t real. It “featured animations created from motion capture,” the company confirmed. 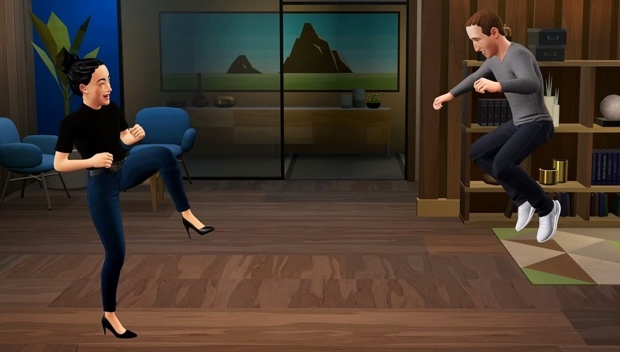 Zuck in The Matrix, with his movie-generated legs.

So the top stories this year were Elon putting his boot into Twitter users, a shoeless crypto (ex-)billionaire, Ethereum improving its carbon footprint, Figma running for the exit, and Meta struggling to draw legs on its avatars.

I can’t wait to jump into 2023; let’s hope some of the above tech personalities step up their game.

Richard MacManus is a Senior Editor at The New Stack and writes about web and application development trends. Previously he founded ReadWriteWeb in 2003 and built it into one of the world’s most influential technology news sites. From the early...
Read more from Richard MacManus
SHARE THIS STORY
RELATED STORIES
Entrepreneurship for Engineers: Building for Customers’ Love CES 2023: Robots, Astronauts, Schwarzenegger and Flying Cars How Not to Waste a Senior Hire Java's James Gosling on Fame, Freedom, Failure Modes and Fun Google’s Carbon among Other Potential C++ Successors
SHARE THIS STORY
RELATED STORIES
2022 in Review: AI, IT Armies, and Poems about Food Golden Paths Start with a Shift Left CES 2023: Robots, Astronauts, Schwarzenegger and Flying Cars Op-Ed: The Rise of AI Content Generators Is an Affront to Creativity Why Your Code Sucks: Common Excuses for Bad Programming
THE NEW STACK UPDATE A newsletter digest of the week’s most important stories & analyses.
The New stack does not sell your information or share it with unaffiliated third parties. By continuing, you agree to our Terms of Use and Privacy Policy.