A Look Back in Time: The Forgotten Fame of LambdaMOO 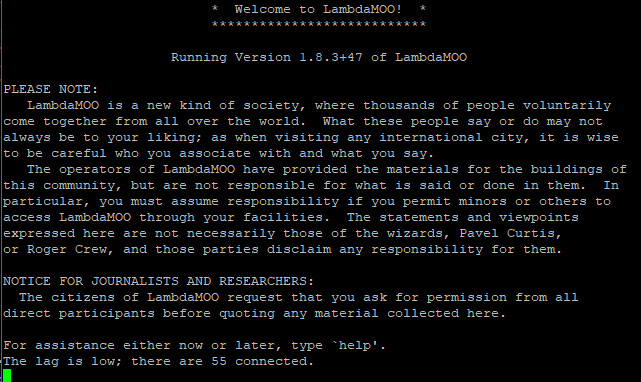 Last week Undark magazine took a look back at LambdaMOO, a text-based virtual world that first opened in November of 1990. Apparently, it’s been operating continuously for nearly 28 years — though it is more of a curiosity these days than a harbinger of the future, as it appeared to be in the early 1990s for many.

It’s a fascinating chance to see how good we are at predicting the directions our technology will take us — an instructive look at one of the online phenomenon of yesterday — since in the beginning, LambdaMOO had seemed to offer hints of what cyberspace was going to be.

Users who log in were greeted with textual descriptions of virtual places. They could navigate from one place to the next, and chat with other logged in users. Users could also let people know what they were doing by typing the @emote command or control the descriptions of themselves with @describe me. In addition to customizing the text descriptions of their virtual avatars, advanced users could also add additional commands and behaviors, making the backbone of this virtual world a massive code project with at least some of its programming done by a group. 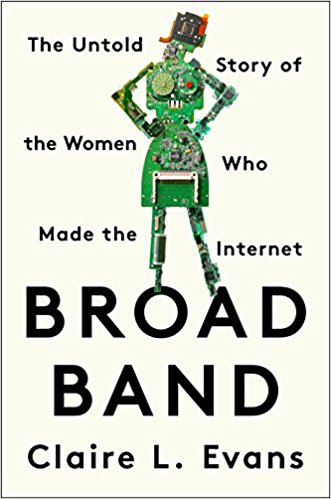 LambdaMoo gets a mention in a new book published in March called “Broad Band: The Untold Story of the Women Who Made the Internet.” Part of the book focuses on Judy Anderson had met the MOO’s creator while pursuing her Master’s degree in computer science at Stanford University — and in 1990 ended up doing a slew of the MOO’s early programming. The book’s author, Claire L. Evans, authored the article for Undark magazine — published under the auspices of a journalism fellowships program at MIT — as part of a recurring feature called “What I left out.”

In the article, Evans pays a visit to “the halls of the mansion, which is really just a string of code, where people once lived, and still do, in some way or another, as someone must, until the server winks out.”

It also includes memories of a fateful summer of 1990, when young Pavel Curtis, the MOO’s founder, was still a researcher working at Xerox PARC’s legendary building in Palo Alto. “[L]ike many people with access to a computer in those days, he studied the early internet,” she wrote.

Of course, there was something in the air at the time, and people viewed their virtual worlds with sky-high ambitions. In one 1994 article, author Howard Rheingold called Curtis’ work “a way of bringing informal, even playful communication back into organizations,” as Curtis and a collaborator named Dave Nichols began wondering if MOOs could become an alternative to telecommuting, especially if they incorporated video chatting. Xerox vice president John Seely Brown, who was the director of PARC at the time, had written in the Harvard Business Review in 1991, “The most important invention that will come out of the corporate research lab in the future will be the corporation itself.”

Rheingold offers an enthusiastic summary of where MOOs seemed to fit into all this. “Using computer-based tools in an atmosphere that fosters storytelling, improvisation, and informal communication is a way of harnessing silicon to amplify the powers of minds and working communities.” He described workers who created “an invisible, informal, potentially immortal knowledge-base of solutions in the form of stories.”

But of course, a lot of people were just using them to have fun.

In another Wired article the same year, Josh Quittner describes finding a virtual field with a virtual rocket ship in LambdaMOO and then flying it to a virtual moon (with its own colony of moon settlers). “I’m here because I’ve heard that strange and wonderful things are happening out where the Internet ends. ”

Citing “the hundreds of MUDs, Mucks, Mushes, and M-whatevers that are propagating on the Net like jackrabbit warrens,” Quittner notes that “You can live in some of these places, in the sense that you can spend most of your waking hours there, in a computer-simulated space. A lot of people do.”

“Virtual reality is the wave of the future,” one MOO user tells him in this 1994 article, “but we are experiencing it now, in an object-oriented text format, where our imaginations take control.” In fact, the user argued that in some ways multimedia VR would be less compelling, because “It’s easier to make things happen with text because you simply have to type what you want to ‘happen’. There are no defined pictures to force you to share the same virtual images as everyone else.”

The piece approaches a serious issue: how the thrill of creating — and of course, of sharing it with real people online — seemed to be turning into an addiction. Judy Anderson, who was still serving as one of the MOO’s administrators four years after its launch, insists she was one of its “addicted” users.

It’s a theme visited by author Howard Rheingold in his 1993 book “The Virtual Community,” citing Curtis’ remarks at a panel discussion in Berkeley. Curtis told the story of a user who was supposed to visit their family for the holidays. Arriving after midnight, the user instead went to the computer lab at Cambridge University so he could check in on the Moo for two hours. “He arrived home at 2:30 in the morning to find the police and some panicked parents, and then began to wonder if maybe he wasn’t in control.” 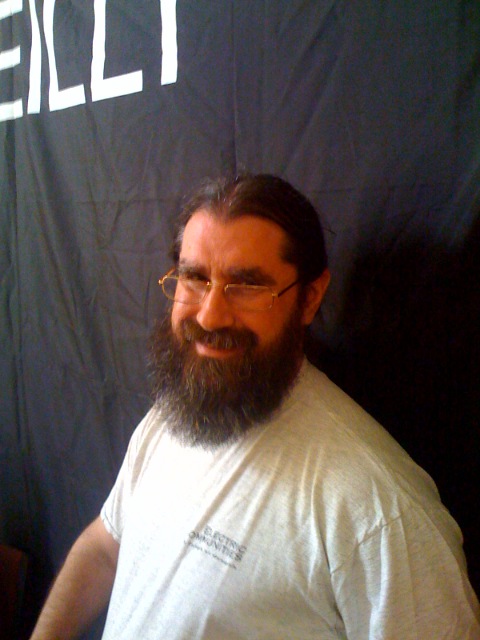 But Quittner obviously had a good time, which he probably remembers fondly to this day, writing “My eyes were bloodshot by the time I went to bed.” Eventually, he visits Pavel Curtis himself and raises a concern. “I think many people will be wholly unprepared for this. It’s almost analogous to LSD.”

“I doubt these things will go away,” Quittner concludes.

But the digital disruption of the century was about to happen: the arrival of web browsers. And even by 1998, MOOs were largely an artifact of the past.

Though pundits predicted a world of corporate MOOs  — we ended up with the stripped down chat-only functionality of Slack. Facebook found a way to import everyone’s real-world communities into the online world, so maybe our social energy is now just going into witty comments on the links our friends share on Facebook and Twitter, or the posts from random Reddit users. Will people marvel at them in another quarter of a century, like the text-based virtual hot tubs of the early 1990s?

And of course, there’s now big-budget virtual worlds created for a pantheon of slick multi-user video games. Last year when No Man’s Sky released an update, over a million players showed up to try it. One commenter on Hacker News remembered playing D&D-like MUDs (multi-user dungeons) in the late 1990s — until most of his virtual friends moved on to multimedia games like Warcraft and Second Life. ” I could just never get into either. They’re kind of overload for me, and, frankly, just not very interesting. For some reason, my brain just works best with the simple text that MUDs provided.”

So what happened to Curtis? Last year Ars Technica noted that he went on to become a software architect at Microsoft. Though LambdaMOO is still online, Curtis hasn’t logged into his creation in nearly 20 years. (“You can’t go back,” he tells Claire Evans.) But all these years later, Judy Anderson is still logging in. “She doesn’t talk to many people anymore, and when we pull up the list of 50-odd active users, she recognizes only a half-dozen names.”

What’s left now is a scattered community of humans, older and perhaps wiser, trying to make sense of what it all had meant. “Rather than mourn its passing, I prefer to remember all the good times and treasure all the friendships that I made (many of whom I still keep up with to this day),” remembers that commenter on Hacker News.

“The game may be gone, but the memories will always be with us… I’m glad I got to be part of that era, and glad for the friendships I made.”

SHARE THIS STORY
RELATED STORIES
The Power and Ethical Dilemma of AI Image Generation Models How to Get Started Filling 3.4 Million Cybersecurity Jobs Entrepreneurship for Engineers: Building for Customers’ Love SRE Housekeeping: Where to Get Started for New Hires Wellspring of Creativity: Why Public Domain Matters
SHARE THIS STORY
RELATED STORIES
How We Manage Incident Response at Honeycomb Golden Paths Start with a Shift Left Java's James Gosling on Fame, Freedom, Failure Modes and Fun Snack Stack: Turning Winter Comfort Food up to 11 Entrepreneurship for Engineers: Avoiding Feature Bloat
THE NEW STACK UPDATE A newsletter digest of the week’s most important stories & analyses.
The New stack does not sell your information or share it with unaffiliated third parties. By continuing, you agree to our Terms of Use and Privacy Policy.