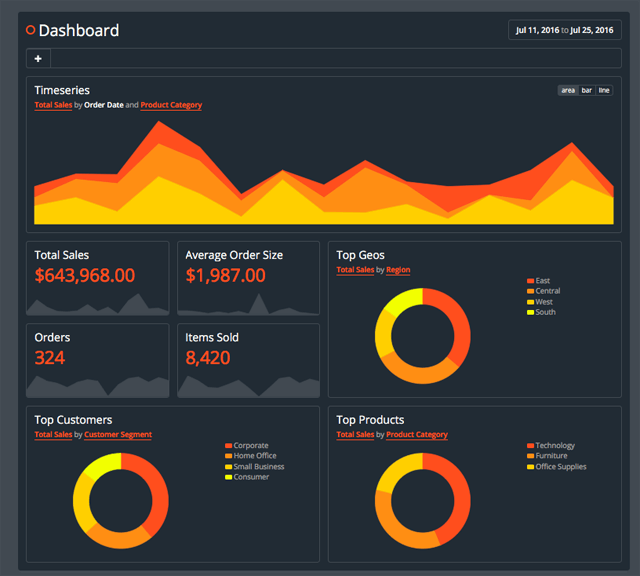 Taking a page from Twilio and Stripe, Portland, Ore.-based Reflect makes it easy for developers to embed data visualization into their websites and mobile applications.

Reflect touts being the first company to offer “data-visualization-as-a-service,” meaning users don’t have to worry about building and scaling infrastructure to offer dashboards, reports and other graphical views of data — it’s a drop-in module.

“These days, the amount of functionality and thought that needs to go into the visualization layer is pretty immense, and we already have a lot on our plate,” said Aviel Ginzburg, co-founder of social media analytics firm Simply Measured.

“They have built a very powerful visualization service that we can plug right into our existing systems and services.”

Co-founders Brad Heller and Alex Bilmes decided this was a problem that needed to be solved while working at cost-management vendor Cloudability.

“We were building the same thing over and over again,” Heller said. “We thought, ‘Somebody needs to solve this problem once and for all for people so engineering groups don’t have to invest tons of cash [in this].

“More and more people are consuming analytics, but it’s really difficult for people to build services that scale. It can cost millions of dollars for bigger companies to build out that infrastructure.”

“I’m hoping we can solve all the infrastructure- and front-end-related problems so we can push the data-visualization world forward a bit. People are struggling with the basics of data visualization right now and there’s a lot of innovation that stifled because of that.”

The company just landed $2.5 million in seed funding in a round led by DFJ (Draper Fisher Jurvetson).

Your place or mine?

The technology involves an agent placed in the client’s database that handles queries and routes data according to a drag-and-drop interface used to create visualizations. The visualization is then translated into code that developers can embed into their applications. It provides them with a layer that lets them model their analytics data in ways to make it easily understood; at the same time, it’s composable and reusable.

Users can choose a hosted agent or use one with their data on-premise.

“The hosted service runs on AWS, but we’ve had it running in Digital Ocean, HPE. It’s very cloud agnostic. We use our own containerization layer, which makes it really easy for us to scale out no matter what the underlying hardware or platform is,” said Heller, the company’s CTO.

It supports Redshift, BigQuery, Postgres, MySQL and other technologies. The API uses data models to translate visualization requests into queries into the database and Reflect.js, a custom JavaScript visualization library and UI toolkit, renders the view to your page.

The Reflect agent maintains all database credentials in an encrypted, embedded database. Those credentials are decrypted to query the database, but they never leave the agent, according to the company.

That’s not a problem for customers like Simply Measured, which are only using publicly available data, but could be an issue for clients handling more sensitive data.

“We don’t have a strong story around compliance right now,” Heller said. “What we have will get you 90 percent there in a lot of cases. Data flows through our API, which is essentially a routing layer — taking a visualization request and sending it to the back end.”

The company is further exploring compliance requirements, he said. An alternative is to package the technology and deploy it in the client’s cloud or cloud accounts where they can maintain control of the data and can secure it.

So far the reporting is bound by the database’s performance.

“But there are a lot of intelligent things we can do because we have this middleware. We know every analytical query you’ve run — we have logs of that. And we know what visualizations you’re using, so we can do a lot of interesting things like pre-warm – run queries ahead of time, say – or do intelligent caching based on how we see data changing in the database, or predict what the next query is going to be. That stuff’s all coming, but right now it’s pretty rudimentary,” he said.

After creating the company last year, Reflect recently participated in Techstars Seattle ’16, where more than 1,000 companies requested access to its private beta.

“Right now we’re focused on helping people use visualization at the right time. People get so stuck on picking the right chart for presentation. With a given dataset there’s only a couple of ‘correct’ ways to visualize the data, depending on the message you’re trying to convey,” Heller said.

It wants to expand the display options it offers, such as providing mashups of different visualizations, but also solve other technical challenges.

Its initial iteration involved having clients push out datasets to Reflect for visualization, but moving the data proved a huge barrier to adoption, and it’s found this agent approach more workable, Heller said. Others in the industry, however, are implementing “a lot of really complicated machinery” in their efforts to scale out.

Simply Measured uses Reflect to provide visualizations for its web-based dashboards. He said it’s easily customizable to the look and feel of his company.

“For us to be able to leverage them through a really easy and seamless integration helps us move faster by focusing on the analytics and data side of things,” said Ginzburg. “They make it very easy for us to customize things and they have a fully featured roadmap, so every couple of weeks, we get to offer new functionality to our customers while we’re focusing on other ends of our platform,” he said.

“Your options when you’re thinking about powering your visualizations are either to go either all-in with a BI tool, then you really don’t have control over the experience – you just have to have things work the way that tool works — or you have to build everything from scratch. [Reflect] provides this amazing middle ground that’s the best of both worlds.”

Digital Ocean and HPE are sponsors of The New Stack.

Susan Hall is the Sponsor Editor for The New Stack. Her job is to help sponsors attain the widest readership possible for their contributed content. She has written for The New Stack since its early days, as well as sites...
Read more from Susan Hall
SHARE THIS STORY
RELATED STORIES
Qlik Plans to Acquire Talend. Is it a Data Management Double-Dip? FAA Flight Cancellations: A Lesson in Application Resiliency OpenSSF Aimed to Stem Open Source Security Problems in 2022 Learning Storage and Retrieval with a Hash Function Improve the Quality of Your APIs with Spectral Linting
TNS owner Insight Partners is an investor in: The New Stack, Simply.
SHARE THIS STORY
RELATED STORIES
Why Trust and Autonomy Matter for Cloud Optimization How to Get Started Filling 3.4 Million Cybersecurity Jobs FAA Flight Cancellations: A Lesson in Application Resiliency Generative AI: How Companies Are Using and Scaling AI Models State of the API: Monetizing API Deployment Is on the Rise
THE NEW STACK UPDATE A newsletter digest of the week’s most important stories & analyses.
The New stack does not sell your information or share it with unaffiliated third parties. By continuing, you agree to our Terms of Use and Privacy Policy.