Adoption and Developer Pay Do Not Align, New Data Suggests 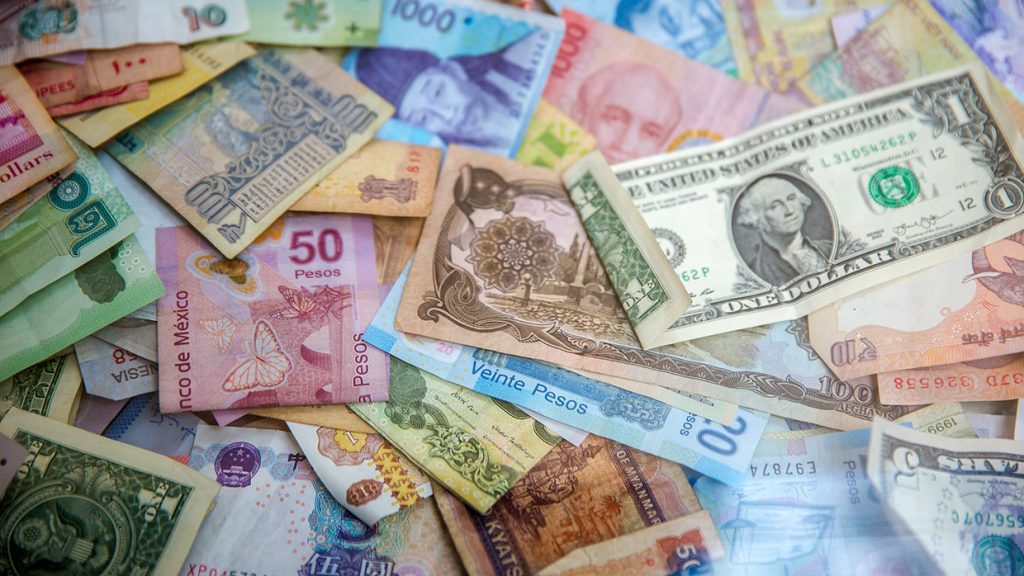 Here’s a dirty little secret: time and again, some of the top-paying tech jobs are for skills that haven’t been cool in decades.

The programming languages with the largest increase in median salary in Stack Overflow’s “2022 Developer Survey” were COBOL and Delphi, rising to $75,592 and $63,984 — up 44% and 37% — respectively. Two of the hottest languages, Dart and Rust, saw some of the highest and lowest changes in salaries, in yet another sign that adoption trends and developer pay are not always in alignment.

Self-reported salary survey data is notoriously volatile; the same is true even within this report. Just by reducing the sample size to only include people who answered the question about years of experience, the language with the top median salary had about a $10,000 swing, with Erlang surpassing Clojure for the top spot. Clojure adoption had actually dropped 26% compared to 2021.

Developers who have used Delphi in the last year saw adoption rise from 2.36% in 2021 to 3.51% among professional developers in 2022. COBOL adoption also rose, but remains at a paltry .57% of usage. Although both are old languages, two out of three Delphi programmers plan to continue using it, indicating it isn’t dead yet.

The story is different for COBOL, with only 20% of COBOL developers planning to use it this year. This actually presents an opportunity to make money for the entrepreneurial at heart. If you want to learn COBOL quickly and take on a few assignments, there are some lucrative roles waiting for you.

Stack Overflow’s 2022 Developer Survey included more than 73,000 participants, of which more than 53,000 were professional developers. All participants were surveyed in May. 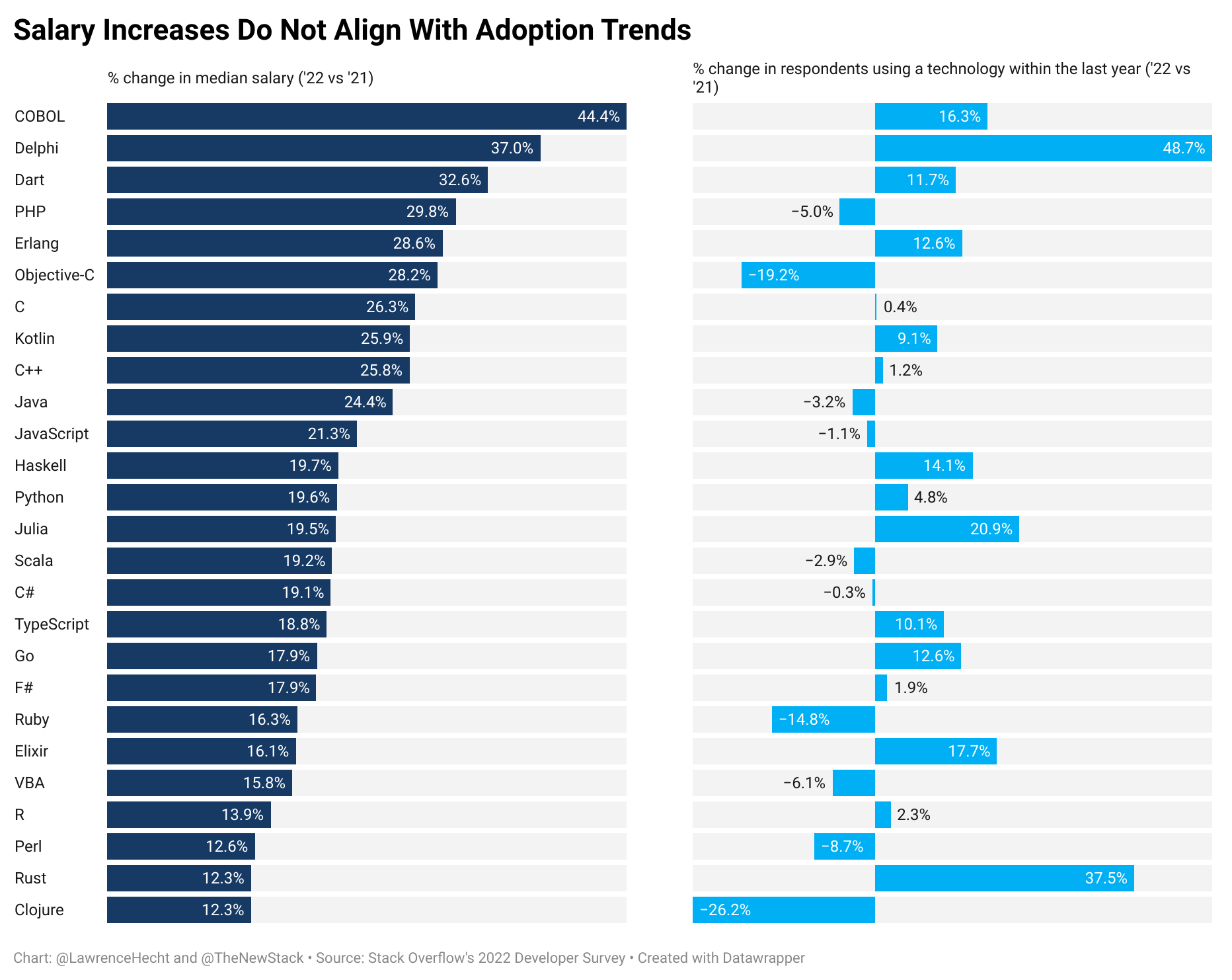 Median salaries of developers rose across the board over the last year, driven up by inflation and economic demand. Beyond that, the Stack Overflow findings indicate that usage and learning patterns do not align neatly with actual salaries.
Source: Stack Overflow, “2022 Developer Survey” 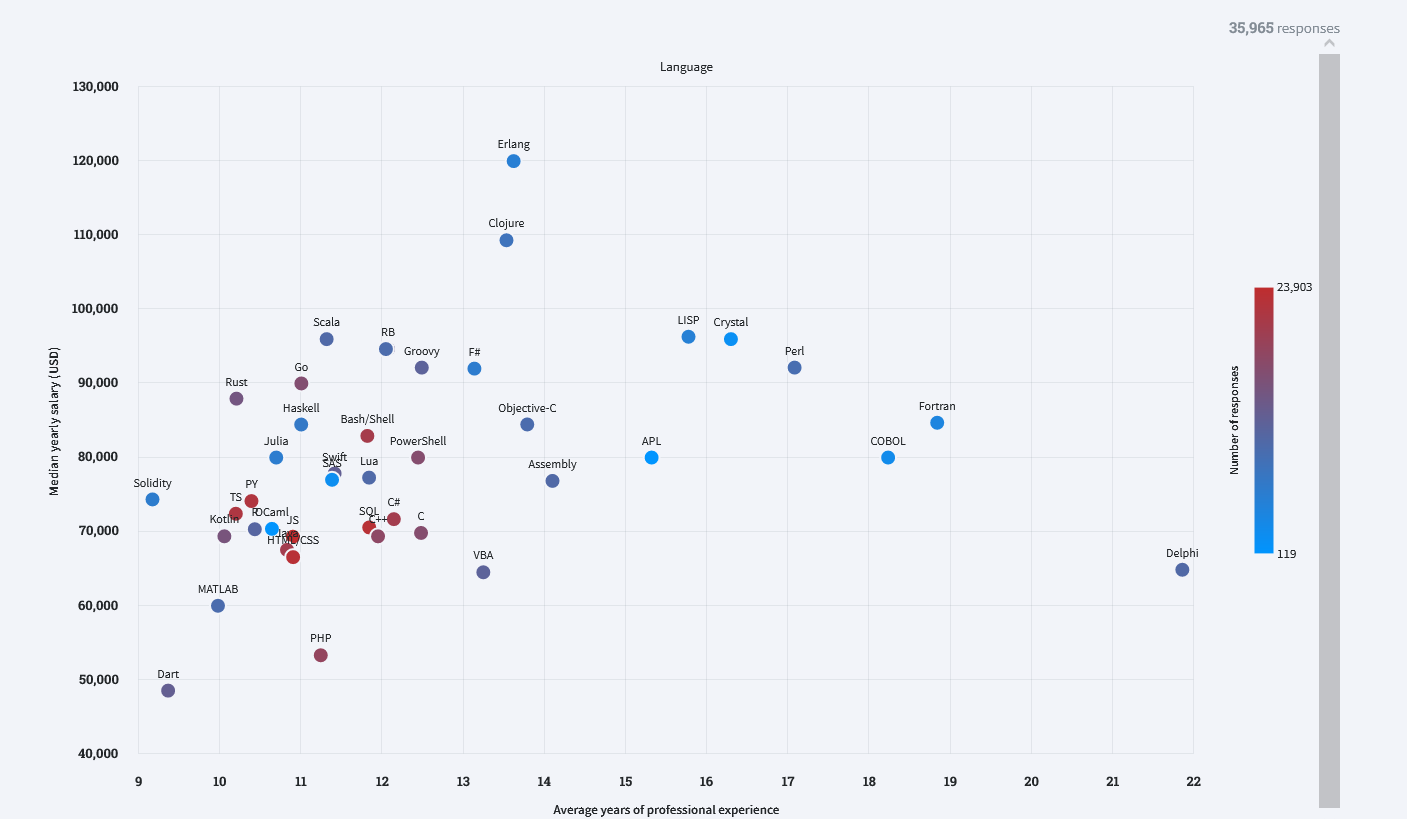 Accounting for years of experience, developers that used Erlang last year on average made about $10,000 more than those that had used Clojure. Source: Stack Overflow, “2022 Developer Survey”