Open Sauced, launched in June, aims to make it easier to start or contribute to open source projects — with an emphasis on inclusion.
Oct 7th, 2022 1:42pm by Colleen Coll 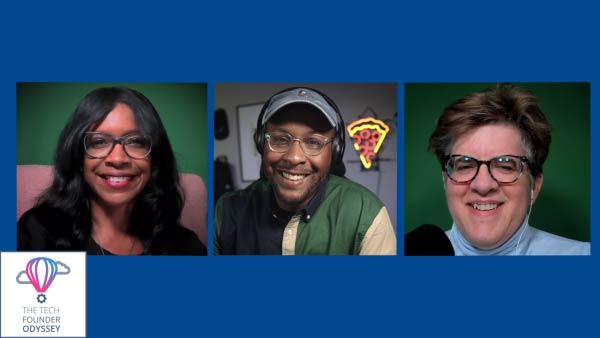 Brian Douglas was “the Beyoncé of GitHub.” He jokingly crowned himself with that title during his years at that company, where he advocated for open source and a more inclusive community supporting it. His work there eventually led to his new startup, Open Sauced.

Like the Queen Bey, Douglas’ mission is to empower a community. In his case, he’s seeking to support the open source community. With his former employer, GitHub, serving 4 million developers worldwide, the potential size of that audience is huge.

In this episode of The Tech Founder Odyssey podcast, he shared why empowerment and breaking down barriers to make anyone “awesome” in open source was the motivation behind his startup journey.

Beyoncé “has a superfan group, the Beyhive, that will go to bat for her,” Douglas pointed out. “So if Beyoncé makes a country song, the Beyhive is there supporting her country song. If she starts doing the house music, which is her latest album, [they] are there to the point where like, you cannot say bad stuff about, he pointed out, “So what I’m focused on is having a strong community and having strong ties.”

Open Sauced, which launched in June, seeks to build open source intelligence platform to help companies to stay competitive. Its aim is to help give more potential open source contributors the information they need to get started with projects, and help maintain them over time

The conversation was co-hosted by Colleen Coll and Heather Joslyn of The New Stack.

Douglas’ introduction to tech started as a kid “cutting his teeth” on a Packard Bell and a shared computer at the community center inside his apartment complex, where he grew up outside of Tampa, Florida.

“I don’t know what computer was in there, but it ran DOS,” he said. “And I got to play, like, Wolfenstein and eventually Duke Nukem and stuff like that. So that was my first sort of like, touch of a computer and I actually knew what I was doing.”

With his MBA in finance, the last recession in 2008 left only sales jobs available. But Douglas always knew he wanted to “build stuff.”

“I’ve always been like a copy and paste [person] and loved playing DOS games,” he told The New Stack. “I eventually [created] a pretty nice MySpace profile. then someone told me ‘Hey, you know, you could actually build apps now.’

“And post Web 2.0. people have frameworks and rails and Django. You just have to run a couple scripts, and you’ve got a web page live and put that in Heroku, or another server, and you’re good. And that opened the world.”

Open Sauced began as a side project when he was director of developer advocacy at GitHub; He started working on the project full time in June, after about two years of tinkering with it.

Douglas didn’t grow up with money, he said, so moving from as an employee to the risky life of a CEO seeking funding prompted him to create his own comprehensive strategy. This included content creation (including a podcast, The Secret Sauce), other marketing, and shipping frontend code.

GitHub was very supportive of him spinning off Open Sauced as an independent startup, with colleagues assisting in refining his pitches to venture capital investors to raise funds.

“At GitHub, they have inside of their employee employment contract a moonlight clause,” Douglas said. Which means, he noted, because the company is powered by open source, “basically, whatever you work on, as long as you’re not competing directly against GitHub, rebuilding it from the ground up, feel free to do whatever you need to do moonlight.”

Support for Black Employees in Tech

Open Sauced will also continue Douglas’ efforts to increase the representation of Black people in tech and open pathways to level up their skills, similar to his work at GitHub with the Employee Resource Group (ERG) the Blacktocats.

“The focus there was to make sure that people had a home, like a community of belonging,” he said. “If you’re a Black employee at GitHub, you have a space and it was very helpful with things like 2020, during George Floyd. lt was the community [in which] we all supported each other during that situation.”

Douglas’ mission to rid the effects of imposter syndrome and champion anyone interested in open source makes him sound more like an open source ”whisperer”’ than a Beyoncé. Whatever the title, his iconic pizza brand — the company’s web address is “opensauced.pizza” — was his version, he said, of creating album cover art before forming the band.

His podcast’s tagline urges listeners to “stay saucy.” His plan for doing that at Open Sauced is to encourage new open source contributors.

“It’s nice to know that projects can now opt-in … but as a first-time contributor, where do I start? We can show you, ‘Hey, this project had five contributions, they’re doing a great job. Why don’t you start here?’”