Tech Ageism and the Myth of the ‘Digital Native’ 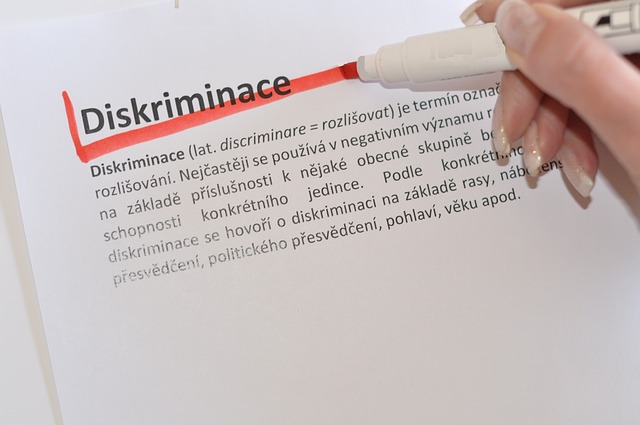 A majority of workers over 30 are worried about losing their jobs because of the ageism in tech, according to a recent report from Visier, an employee data analytics company. It pulled HR data from over 100 enterprise companies and mining the data to obtain answers to workforce questions and the results of this survey.

According to Dave Weisbeck, Visier chief strategy officer, it’s not a surprise to anyone that there is ageism in tech. But, he said in an interview, it plays out in a way that is more subtle than we might imagine.

The Findings: The Good

When we think of the term ageism in the IT sector, we generally think of how employers and project managers will systematically or casually discriminate against individuals simply on the basis of their age.

We hear a lot of anecdotes about ageism in our field, but is it true? First, start with data. “Where is the evidence?” asked Weisbeck. Everyone starts with an assumption of bias, but is that even true, according to the data?

It turns out that older employees are not discriminated against once they are hired. Exceptions exist, of course, but the data shows that after 40, non-manager tech workers enter the “Tech Sage Age” (a term coined by Visier). Visier found workers in the Tech Sage Age are increasingly likely to receive top performance ratings. This is not true in non-tech industries, said Weisbeck, where older workers find their performance ratings decline.

According to the data, he said, older workers are more loyal, as measured by how long they hold a job. Once they get a job, they stay put. Contrast this to turnover rates for mid-twenties, which are up to 40 percent. By the late twenties, this rate drops to 20 percent and drops again to 10 percent for employees in their early 30s.

The cost of replacing a tech worker, as measured in lost productivity and new employee ramp up, is generally ballparked at around 150 percent of base salary, said Weisbeck. So this should not be an insignificant consideration when hiring, since companies who often cite lower employee costs for hiring younger workers.

According to performance ratings, older workers also outperform younger workers. Their knowledge and experience provide measurable results, he said. Visier also found no salary decrease in similar positions across their customers. Older workers are also just as likely to be promoted to management. “If you give someone a manager position, you obviously value them more,” said Weisbeck. “There is no bias on this front.”

Despite all of this data that older workers are awesome, bias in hiring, said Weisback, “is very stark.” Inc.com ran an article with the depressing title “The Unforgivable Sin in Silicon Valley: Being Gen-X,” in which the magazine asserted that “If you grew up listening to Pearl Jam, you can kiss your high-tech dream job goodbye.”

According to Visier’s data, hiring managers weight bias heavily for younger workers. Simply put, for Baby Boomers, the chances of being hired are 60 percent less than their workforce representation. It’s a hard age for all industries, but the data shows it’s much worse in tech, he said.

Workers age 34-48, are not much better off, being hired 33 percent less than their workforce representation. By contrast, job seekers age 20-33 are hired a whopping 50 percent more, Weisback said. 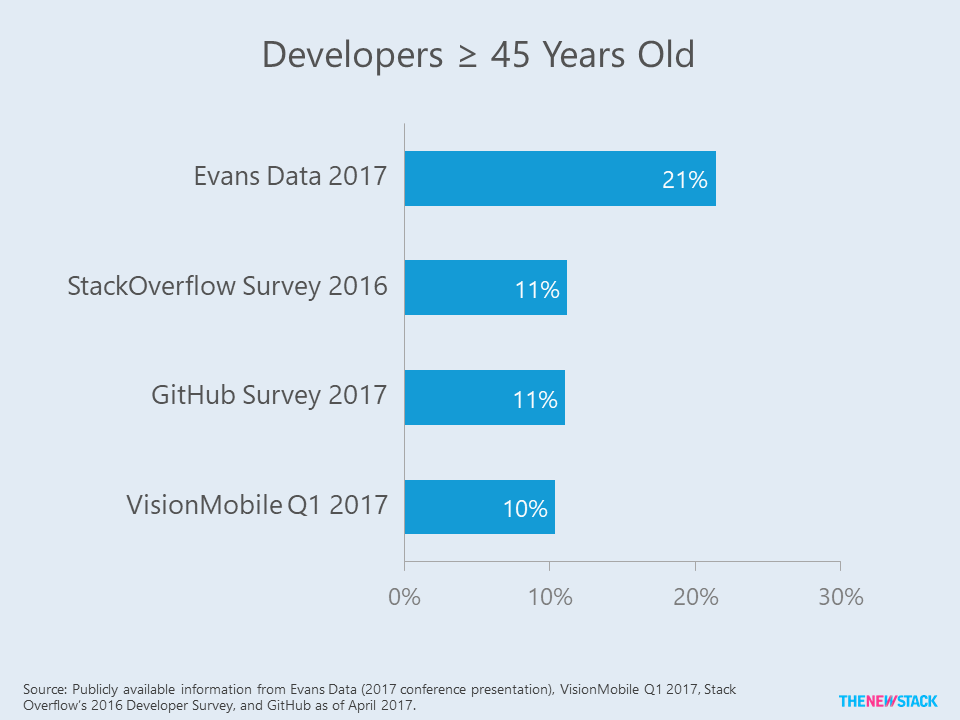 Survey data says developers skew even younger than other tech workers. In addition to the data shown in the chart, the GitHub and VisionMobile data showed that two-thirds of respondents were 35 or younger.

Frustration from slamming into this bias led one person to start the @digitalageist Twitter feed (there is also a Digital Ageist Facebook page). After being laid off from a successful management position in social content marketing after the company’s acquisition, the person spent months searching for a comparable position, only to be confronted with ageism in every post. They spoke to us on the condition of anonymity, as they are still looking for a job, and will be referred to as DA.

DA, who is 46 but is often mistaken for being in their 30s, met brick wall after brick wall, even when hitting the interview stage. Being from a marketing background, they evaluated the language used in hiring posts to figure out what language is used to cue the company is looking for under 30s. “Energetic,” “passionate,” and “digital native” are terms “that make it clear they want someone hip and cool and young,” they said. These terms are ubiquitous across the job postings.

A Digital Native is a person who was born after 1990 and raised with the internet as omnipresent.

“What do they think a young person is going to bring to the table that an older person is not going to bring?” DA asked. Of course, pay younger workers less money, but also there seems to be the idea across hiring managers that Millennials will be more passionate, that they will understand the technology better, and they will know more about what other Millennials want, said DA. “Like somehow being raised on an iPad will magically translate into marketing acumen.”

One fact that companies seeking “digital natives” are overlooking is that age discrimination has been illegal since 1967.

That doesn’t stop companies from using the term in job listings. DA started calling out this term just over a year ago, logging 508 tweets, most of which show the use of the term, tag the companies, and suggest using the term “digital savvy” instead. So far, only a few companies have responded to the helpful suggestions.

Companies like Intuit, Cisco and McAfee have been called out on the feed. Time Magazine is one of the worst offenders, said DA, and they apparently don’t care because they keep doing it over and over and over. Media companies are the worst, they said.

Occasionally, DA said, the job posting will quietly go away. A few times, the hiring person will apologize and promise to do better. This makes DA happy, because, they said, the point of the feed is raising awareness.

Still, much more awareness may need to be raised. At the time of this writing, DA is still looking for work.

TC Currie is a journalist, writer, data geek, poet, body positive activist and occasional lingerie model. After spending 25 years in software development working with data movement and accessibility, she wrote her first novel during National Novel Writing Month and...
Read more from TC Currie
SHARE THIS STORY
RELATED STORIES
Java's James Gosling on Fame, Freedom, Failure Modes and Fun Tech Works: How Can We Break Our Obsession with Meetings? Watch Out, Attackers Have Their Heads in Your Cloud! The Power and Ethical Dilemma of AI Image Generation Models 2023 Will Be the Year FinOps Shifts Left Toward Engineering
TNS owner Insight Partners is an investor in: Simply.
SHARE THIS STORY
RELATED STORIES
How to Get Started Filling 3.4 Million Cybersecurity Jobs How Will Working in Tech Change in 2023? Watch Out, Attackers Have Their Heads in Your Cloud! Platform Engineering Won’t Kill the DevOps Star Why Your Code Sucks: Common Excuses for Bad Programming
THE NEW STACK UPDATE A newsletter digest of the week’s most important stories & analyses.
The New stack does not sell your information or share it with unaffiliated third parties. By continuing, you agree to our Terms of Use and Privacy Policy.