The Linux Foundation is undertaking the massive task of assigning farm fields with a GeoID to enable a new digital infrastructure.
Jan 17th, 2023 10:27am by Loraine Lawson 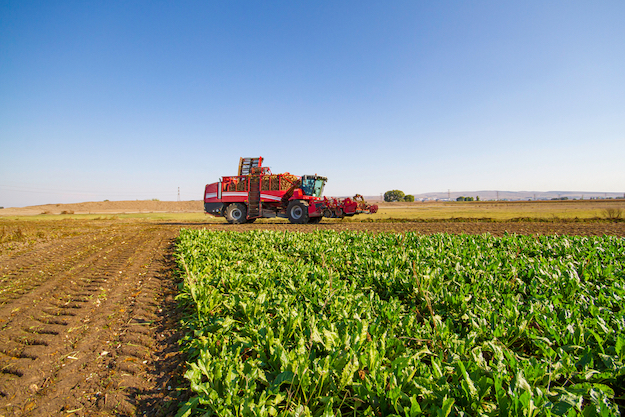 Food sustains all of us, yet the information systems that support our food supply are 100 years old — if not older. The Linux Foundation plans to change that with its AgStack Project, said Sumar Johal, who is the executive director of the initiative. AgStack will create a common, neutral and open digital infrastructure, which can “in turn enable content creation and consumption at scale in the agricultural ecosystem,” Johal added.

“The systems in place for our food supply are antiquated,” Johal told The New Stack. “Half of the world’s population is employed in agriculture; 70% of our freshwater is consumed in agriculture. It’s a very, very important ecosystem, with this constellation of stakeholders in different industries that comprise the agriculture ecosystem.”

It’s an ambitious undertaking that will enable use case such as better food traceability, carbon tracking, crop production data and other analytics from the literal field. Up till now, that’s been hindered by silos and a lack of interoperability created by individual companies trying to do digital transformation, Johal said.

“If we are going to create a reliable and secure food supply, and nutritious and sustainable food supply for the next few decades even, we need to dramatically transform — and that’s not a new thesis. That’s well understood by the World Economic Forum and McKinsey and all kinds of thought leaders,” he said.

The Linux Foundation takes the position that it’s well-positioned to provide this digital infrastructure in a way that not even the UN can do. Governments are ill-prepared because they, too, are siloed and food transcends borders. The private sector has its own concerns, including the problematic idea that one company might own such an infrastructure, Johal added.

“Nobody is in charge of this very important infrastructure layer; and because of that lack of infrastructure layer, in the last decade, we really haven’t seen the adoption, even though there’s a huge demand for digital transformation,” he said. “A third of our food is wasted, a third of the people in the world are hungry. And so we have this massive disconnect and these are big numbers, these are not marginal numbers. So the net thesis is that there’s a digital infrastructure needed.”

Someone has to build it and that someone needs to be neutral, Johal said. The Linux Foundation decided it was a perfect fit.

“That’s the intent of AgStack, to build and maintain that digital infrastructure so that applications can be created and consumed at scale in the ag ecosystem — for digital transformation, for improving efficiency, and security and cost,” he said.

The AgStack as a concept has only been around a couple of years, and organizes around 10 topics: from a messaging system, to a registration system for users and assets. The 10 topics are grouped into four key buckets to create the AgStack: frameworks, models, data and utilities. The Foundation, along with its partners, will also build some applications to showcase how the digital infrastructure can work, he said. 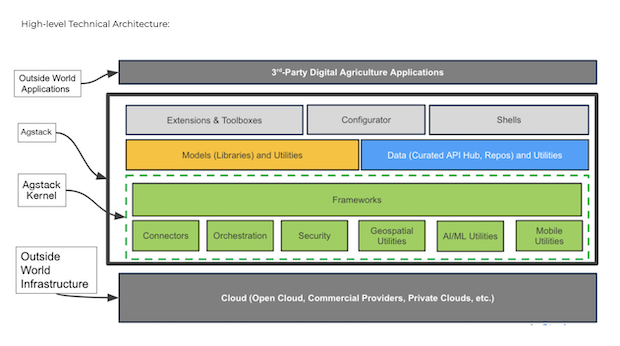 The first stage of the project, funded by the German government, is the simple registration of a field boundary to get a GeoID that’s “geographically intelligent,” Johal explained. This is a geographical token that has intelligence built in through APIs that the Linux Foundation hosts and which identifies that field. If someone else registers the same field, they’ll get the same ID, he added. If the fields are slightly different, they get a different ID if they’re overlapping.

“These IDs are in disparate systems, but they all are interoperable,” he said. “If I share my data tag with an ID, the recipient knows exactly what geographical boundary it is because the API allows them to figure out what the field boundaries are.”

Precise knowledge of field boundaries can help farmers, agricultural companies and the public sector to monitor and manage crop production, and study management practices — such as crop rotations, cover cropping, tillage, and irrigation. It will also allow more data collection on pest and disease spread, as well as species diversity, according to the Linux Foundation. By sharing agricultural data, the Foundation contends that new insights from such data could contribute to greater global food security and innovation. It will also support, for instance, private sector companies being able to subscribe to important public datasets like satellite imagery, soil information and weather feeds that apply to a particular boundary or field, Johal said.

“The token becomes a really important identifier for anything from insurance, financial products, loans, carbon credits [to] fertilizer sales — what is happening in the context of a field can be identified by that ID,” he said. “We’re just simply creating a registration. That phase is already an alpha; we’ll be launching in beta in about 15 days [mid-January].”

Phase two, announced Dec. 20, will use the registration dataset from Phase one, with satellite imagery, to train AI to recognize and identify field boundaries around the world and tag them all with a GeoID. The Linux Foundation has partnered with Stanford and MIT professors to use their machine learning code to identify the fields.

“This has been going on in parallel for the last decade or so, where they’re trying to detect the field boundary from space and it’s just a detection system,” Johal said. “They don’t have any GeoIDs or anything like that. They’re just detecting the field boundaries continuously with satellite data. And they’ve been fairly successful in recent years.”

The contributed code is based on research by Dr. Sherrie Wang, Dr. Francois Waldner and Professor David Lobell at The Center on Food Security and the Environment at Stanford University, and funded by organizations including the NASA Harvest Consortium. Wang authored her Ph.D. thesis at Stanford on the topic and now is a professor at MIT, and donated the code base to the Foundation, Johal said. The manually registered fields will allow the machine to learn and then automate the process of providing a GeoID to farmland.

The first two parts of the AgStack project will enable a GeoID code for fields and a database of these codes. From there, Johal can imagine developers using technologies such as WebAssembly and edge technology to provide new services, including data services, and applications to farmers and others in the industry.

“Because of the distributed nature of computing, Wasm is a really powerful set of tools to build these applications very, very quickly,” he said. “I think that those use cases, whether it be in insurance, or compliance, or in geospatial data rendering, undoubtedly will use Wasm.”

He also thinks edge technology such as LF Edge could solve latency issues that might be encountered when collecting and using data.

“The developers are both in the content creation and content consumption spaces, so we’ll be creating Jupyter notebooks and Python code to essentially show them,” Johal said.