AI-Controlled Robots Need to Be Smarter

Pieter Abbeel,covers why and how the potential of robotics can evolve beyond just serving as pre-programmed devices thanks to advances in IT.
Dec 21st, 2021 12:28pm by B. Cameron Gain 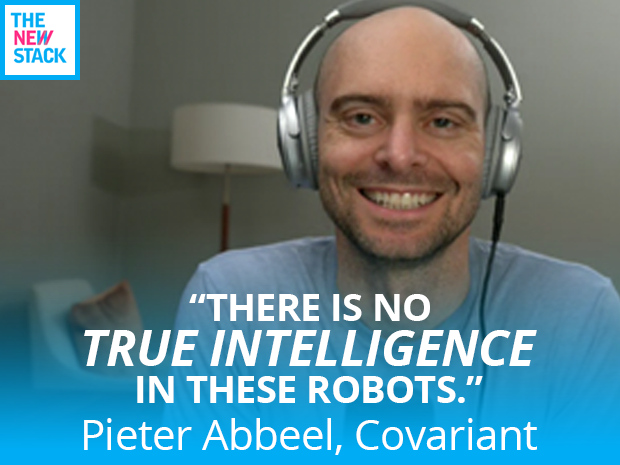 Artificial intelligence (AI) and machine learning (ML) have seen a surge in adoption and advances for IT applications, especially for database management, CI/CD support and other functionalities. Robotics, meanwhile, is largely relegated to factory-floor automation. In this latest The New Stack Makers podcast, Pieter Abbeel, co-founder, president, chief scientist at Covariant.ai, a supplier of “universal AI” for robotics, discusses why and how the potential of robotics can evolve beyond just serving as pre-programmed devices thanks to advances in IT. Abbeel also draws on his background to offer his perspective, as a professor at the University of California, Berkeley and host of The Robot Brains Podcast.

Why AI-Controlled Robots Need to Be Smarter for IT

The challenge that Covariant addresses is how to apply modern advances in AI to robotics and specifically to “manipulation robots,” Abbeel said. “Robot hands are not like human hands today — they’re grippers, they’re suction cups. But manipulation robots give them intelligence, which is what we’re doing,” Abbeel said. “And you might wonder, what’s the big deal? Every robot in every movie is smart. But actually, if you look at robots in the real world, where are they? They’re in car factories and in electronics factories where you’ll find the majority of them.”

Robotics today largely involve pre-programmed motions, Abbeel said. “There is no true intelligence in these robots. They’re very productive and helpful. There’s nothing wrong with that,” Abbeel said. “But it’s very limiting if all you get to do as a robot is pre-programmed motions. And so we’re developing AI that will open up so many more opportunities for robots to be helpful.”

Applications for AI, and in particular, ML got a huge boost over a decade ago when deep neural networks — networks that process information in a way that is not unlike how the human brain functions — began to recognize and process images much better than “any previously hand-engineered solution,” Abbeel said.

“The more data you have, the larger the neural networks you train on that data — and, of course, a lot of software comes with that to distribute your compute over many machines, and so forth and manage all your experiments,” said Abbeel.

A key challenge is how to ensure the right data is collected for robots that makes use of advanced AI applications. The system “can learn about the real world directly, and get those reliabilities that are required to, for example, ensure that the pick and place operations in the warehouse can be done reliably,” Abbeel said. “You can get the thing you ordered, as opposed to getting the wrong thing or getting nothing at all because nothing was shipped to you.”

BC Gain’s obsession with computers began when he hacked a Space Invaders console to play all day for 25 cents at the local video arcade in the early 1980s. He then started writing code for very elementary games on the...
Read more from B. Cameron Gain
SHARE THIS STORY
RELATED STORIES
Explore or Exploit? Trivago's ML for New Recommendations The 3 Underrated Strengths of a Native Graph Database AWS Brings Trusted Extension Support to Managed Postgres Do We Need Data Normalization Anymore? 5 Key Questions for App-Driven Analytics
SHARE THIS STORY
RELATED STORIES
Is This the End of Data Refactoring? The Immutability of Time Series Data Materialize: Managed Real-Time Data Real-Time Recommendations with Graph and Event Streaming Artemis Mission, Telescopes Present Data Challenges for NASA
THE NEW STACK UPDATE A newsletter digest of the week’s most important stories & analyses.
The New stack does not sell your information or share it with unaffiliated third parties. By continuing, you agree to our Terms of Use and Privacy Policy.