ChatGPT: AI Moves to the Web

Like it has many times before, the web is transforming an abstract concept — artificial intelligence in this case — into tools that millions are starting to use. But when will we see a ChatGPT API for developers?
Dec 16th, 2022 7:00am by Alex Williams

Artificial intelligence (AI) has moved to the web.

Like it has many times, the web has transformed an abstract concept for most people into tools millions are starting to use.

The latest example comes with OpenAI’s ChatGPT, the LLM that, in five days, registered more than 1 million people and is now used for all that humanity provides when people embrace new forms of expression. It’s just what AI development needs. A creative jolt to the all-too-mundane examples of how AI helped some oil company or how cops use it for surveillance. Now AI-based tools are in the hands of millions. You can thank the web for that.

It is not the first AI technology to come to the web, but it is arguably most impactful. Last year, generative AI came to the web with OpenAI’s Dall-E, and then Dall-E 2, which was released with an API in the fall. That pointed the way for the web’s use for amplifying AI. Stable Diffusion’s direction points the same way as Dall-E 2. The text-to-image technology from Stability.ai is now accessible to make images on the web.

ChatGPT is by no means stable. It reflects the nascent nature of AI and its impacts as it moves deeper into the fabric of the web. When released, developers exploited ChatGPT to answer questions on StackOverflow that sometimes turned out wrong. Data is the new oil. Oil has any number of purposes, but when the data spills, it creates a nasty slick that spares no one in its path.

But is AI for the web ready? ChatGPT does not have an API, which developers critique as a missing piece. OpenAI does plan to release an API for ChatGPT.

But developers want an API. Just look at GitHub.

The top 10 trending repos on GitHub are mostly chatgpt related and there isn’t even an API https://t.co/TdaBForzLG

We already see examples of how ChatGPT will shift web development. The co-founder of Alphi.dev, a no-code cloud function provider, wrote a post about how it may be faster for a visual developer to build web apps — and prototypes will be faster than ever.

OpenAI is also the force behind GitHub CoPilot, which, according to Microsoft, is now a major part of the company’s developer tooling. For example, It’s now used to generate HTML, JavaScript and React. One developer used GitHub CoPilot to create a site for finding cheap deals on Amazon. He didn’t write any code. CoPilot did all the work.

The web will make AI more available to people. Of course, ChatGPT agrees: Below is an exchange in which I ask the service how the web will transform AI: 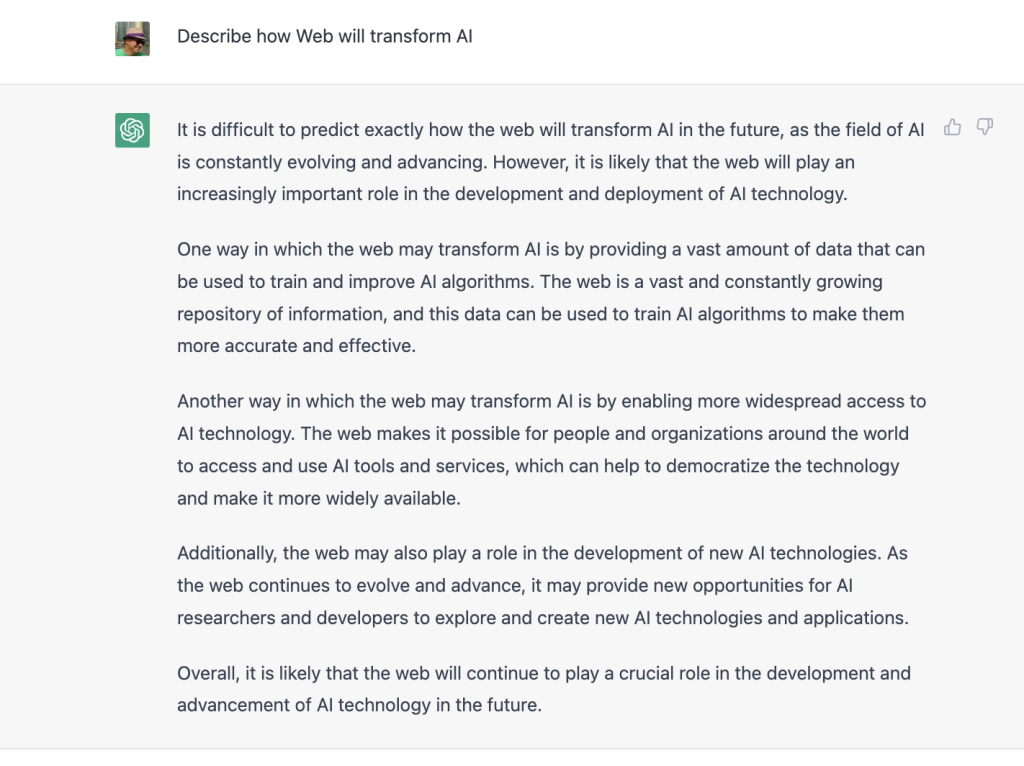 The web will accelerate the changes and define its directions as we have observed countless times. Restful APIs connected services and led to developer-led efforts that attracted millions to different communities. It led to forms of communication that changed news-gathering approaches, the way activists protest, and how extremist groups and their state sponsors misinform.

Now, here we are, knowing that we can expect what we have seen before. An endless distributed network that will get increasingly magical, bizarre, useful, evil and entertaining, depending on the models you follow and build.