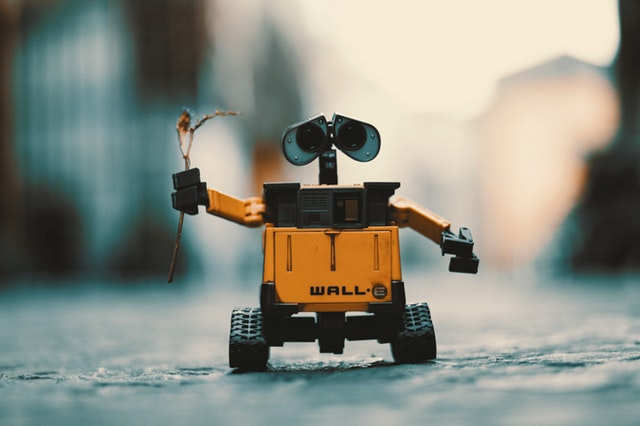 Machines have already begun quietly replacing human workers. The issue may seem abstract when it’s somebody else’s job. But what happens when they come for yours?

Amazon began automating its warehouses years ago, but now “Amazon’s Clever Machines Are Moving From the Warehouse to Headquarters,” according to Bloomberg. “The people who command six-figure salaries to negotiate multimillion-dollar deals with major brands are being replaced by software that predicts what shoppers want and how much to charge for it.”

The initiative, called “hands off the wheel,” started several years ago, and involves not only making forecasts about what to buy, but also placing orders and even negotiating prices. Humans could override the algorithms — at first — but such human intervention was “increasingly discouraged” by Amazon, requiring that each such move be accompanied by a justification, Bloomberg reports, citing people “familiar” with Amazon’s internal policy.

And the machines proved themselves…

One former Amazon executive (who now manages Johnson & Johnson’s supply chain) remembered that there was a clear business case for using algorithms: “Computers know what to buy and when to buy when to offer a deal and when not to. These algorithms that take in thousands of inputs and are always running smarter than any human.” Amazon’s AI-powered “marketplace” division eventually had an operating profit margin twice as high as the human-intensive “retail” division that worked directly with major brands — even though the retail division had “far more” (human) employees.

In fact, there were a few international markets where human workers in the retail division had never turned a profit. Reportedly there’d be annual sales meetings where a team of 15 people (overseeing a specific part of Amazon’s brand-name sales) found themselves outsold by a one-person team from the marketplace division. Bloomberg spoke to Elaine Kwon, who worked at Amazon for two years as a vendor manager from 2014 to 2016, who offered a blunt assessment. “Amazon realized a lot of expensive employees were spending a lot of time working on things that should really be automated.”

Amazon’s AI-powered “marketplace” division eventually had an operating profit margin twice as high as the human-intensive “retail” division that worked directly with major brands — even though the retail division had “far more” (human) employees.

Amazon’s holiday “Lightning Deals” soon migrated to the marketplace division as well. Where before retail staffers spent thousands of hours predicting demand and then negotiating appropriate prices with vendors, all that work has been automated away.

Now vendors simply log into a web portal where Amazon’s algorithm automatically calculates whether they’re offering sufficiently profitable prices and then indicates how much Amazon is willing to buy. Soon even major brand-name retailers wanted to bypass Amazon’s retail division altogether since the marketplace division offered them more control over product descriptions and images, as well as prices.

“[F]ew express much surprise that a company with a cloud services division and prowess in artificial intelligence would put machines to work wherever it makes sense.”

Kwon says workers were actually glad to let go of their complicated spreadsheets for managing inventory — especially since machines could do it better, with more speed and accuracy. (And probably even more enthusiasm). “The numbers don’t lie. It’s a better model,” Kwon tells Bloomberg.

Bloomberg concludes that “creeping automation” at Amazon helps explain a “string of recent departures and reassignments that includes executives who’ve been with the company for years.” Kwon now runs her own e-commerce management company — Kwontified — specializing in beauty, fashion, and lifestyle products — that promises customers “a rare insider’s perspective to help clients get the most out of their online storefront.” Bloomberg cites her as an example of former retail team members who are now helping major brands position themselves better on Amazon.

Not surprisingly, Kwon’s new venture also involves data. “The company helps sellers by mining data from Amazon’s API and sharing crucial metrics that are hard to find, such as ways to determine which customers will become repeat shoppers,” explains GeekWire. (And there’s also a forecasting function.)

But it’s not just Amazon where humans are being replaced by machines. There were several notable examples just last year. A Japanese insurance firm replaced 34 human claims workers with IBM’s Watson Explorer. And the CBC also profiled a woman in the mortgage financing industry who saw 40 percent of her department laid off, “and the reason they were given was automation.”

“These are people who had spent years getting trained to be experts in this field. A lot of it was pretty shocking to all of us.”

The Canadian news outlet also cited the example of Goldman Sachs, which went from 600 cash equities traders in 2000 to just two — “backed by a team of 200 software engineers.” And of course, Silicon Valley’s Zume sells pizza pies that are automatically cooked en route by ovens in their delivery trucks. Last year the New York Times even ran an article about people who were already training their AI replacements to act more human.

Maybe they’re all just glimmers of the shape of things to come. This week several news outlets also took notice of JD.com, which opened an automated fulfillment center in Shanghai where just four human employees keep it all running, processing a whopping 200,000 orders a day (both the packing and shipping). The job of the four humans? Maintaining the robots.

“This is the future,” writes the web site Axios, pointing out that Alibaba, another major Chinese retailer, has also already constructed a warehouse that’s entirely automated. To expand the use of automation even further, JD’s is also investigating the use of self-driving trucks — and even drones — and the company is already able to provide same-day delivery service throughout most of China (a land mass covering 3.7 million square miles).

With a $58 billion market capitalization, JD has even bigger ambitions and eventually plans to sell its automated methods to other companies, calling it “Retail as a service” (RaaS?).

JD insists it will shift warehouse workers to other positions, and that their goal is simply more speed and reliability. Though there are expenses with the transition, JD Chief Technology Officer Chen Zhang told a group of reporters in Beijing that these investments will pay off in the long run. “Everything is about scale. When you invest in technology, you don’t worry about spending money. You worry whether you can get to scale. When scale comes, profit will come.”

In the end, there may be no sector that’s immune from the rise of the machines. Even conservative banks have already begun using AI to help them monitor hundreds of thousands of transactions to keep up with new financial regulations, the Wall Street Journal reported in 2016 — prompting a startling pronouncement from the venerable Harvard Business Review.

“We have to admit that there are some knowledge-work jobs that will simply succumb to the rise of the robots,” the WSJ concluded. “They are just too thoroughly composed of work that can be codified into standard steps and of decisions based on cleanly formatted data.”

SHARE THIS STORY
RELATED STORIES
2022 in Review: AI, IT Armies, and Poems about Food Data, Analytics and AI: What Will Happen in 2023 AWS Inf2: A 12-Chip System for Large-Scale ML Production How Ray, a Distributed AI Framework, Helps Power ChatGPT Generative AI: How Companies Are Using and Scaling AI Models
SHARE THIS STORY
RELATED STORIES
Why Your Kubernetes Ship Is Sunk without Machine Learning Hardware Independence Is Critical to Innovation in Machine Learning AI21 Labs Bets on Accuracy, Develops Approach for Factual AI Why 'Explainable AI' Can Benefit Business AgStack: Linux Foundation Project Will Bring Farms Online
THE NEW STACK UPDATE A newsletter digest of the week’s most important stories & analyses.
The New stack does not sell your information or share it with unaffiliated third parties. By continuing, you agree to our Terms of Use and Privacy Policy.