Not only is AI helping us unlock the underlying secrets of how proteins fold into various structures, it may be helping us make some music out of them too.
Jul 4th, 2019 9:16am by Kimberley Mok 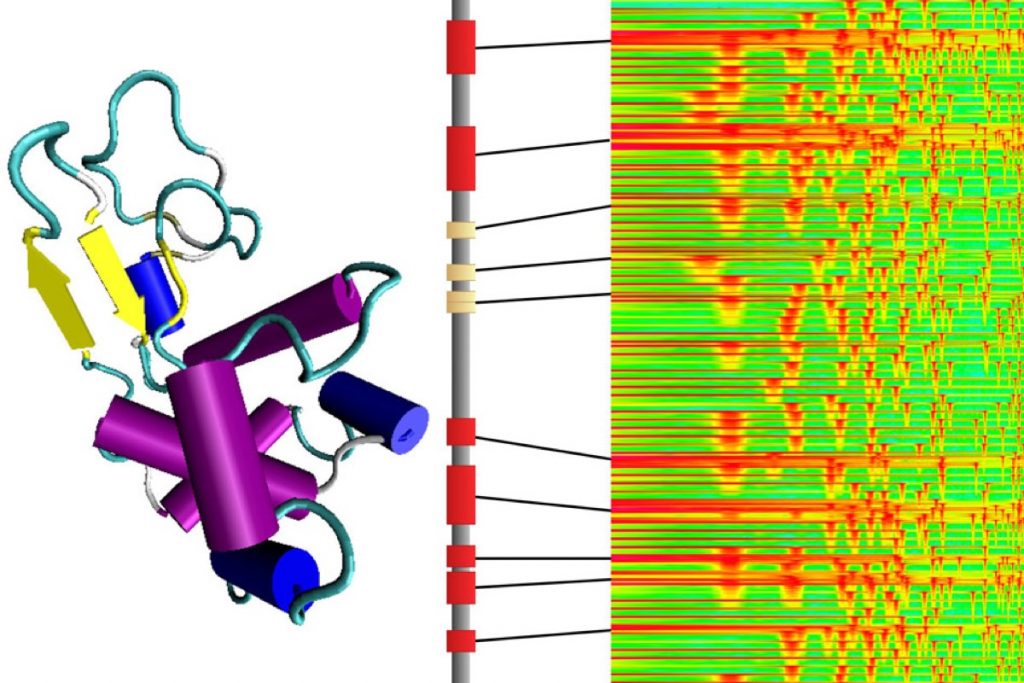 Anyone who has studied a bit of biology will know that amino acids are the building blocks of all life. More specifically, amino acids — which are made up of organic compounds like carbon, nitrogen, hydrogen and oxygen — combine to form longer chains of proteins that form our skin, bones and muscles, and are essential for biological functions like immunity, digestion and for synthesizing hormones and neurotransmitters. The function of a protein is determined by the way that it folds, and the way proteins fold into functional structures can be a rather complicated and mysterious process that experts are only now starting to crack open with the help of artificial intelligence.

But not only is AI helping us unlock the underlying secrets of how proteins fold into various structures, but it may also be helping us make some music out of them too. Just as music is made up of patterns of chords, tones, tempo and volume, analogous patterns can be found in proteins as well. It’s an intriguing concept that researchers over at MIT are now exploring with a system that not only uses AI to help “translate” amino acids and their folded protein structures into musical compositions, but is also helping experts to predict and create and novel variations in protein structures, potentially leading to new proteins that have never been seen in nature before.

There are millions upon millions of proteins that exist, with more being discovered all the time. What’s surprising is that this incredible variety is produced from only a few amino acids — only twenty, in fact. Recently published in ACS Nano, a Massachusetts Institute of Technology team’s paper details how they “translated” these 20 basic amino acids into audible sounds, arranged as a 20-toned “amino acid scale”, using ideas gleaned from music theory, category theory and quantum chemistry. In a nod to the fundamental vibrational frequencies of matter, the scientists transformed the molecular structures of life’s building blocks into recognizable sounds, with each amino acid offering a distinct musical signature. When combined as proteins, these amino acid sound signatures will form a variety of musical sequences that represent a particular protein — almost like an audible fingerprint.

“When you look at a molecule in a textbook, it’s static,” said MIT engineering professor and the paper’s lead author, Markus Buehler in a press release. “But it’s not static at all. It’s moving and vibrating. Every bit of matter is a set of vibrations. And we can use this concept as a way of describing matter.”

In developing their system, the team looked at the different three-dimensional structures of each amino acid to help them assign a unique tone and duration to each. While the sounds might not be all that familiar to our ears, the team’s method allows for the transposition of these molecular structures into musical structures that the human ear might understand better than a textbook diagram. For instance, during this sonification process, the researchers eventually learned to identify the different tones that an alpha helix or a beta sheet might produce.

While these structures produce their own musical language, we humans still don’t fully understand how proteins work, nor the patterns that underlie them. That’s where AI can help, so to test that possibility, the team then fed these musical sequences into a recurrent neural network, giving the AI the opportunity to “learn” the vast repertoire of musical sequences that represent proteins.

What’s even more interesting is that the process can also be done in reverse, with the trained AI improvising and adding musical variations that could be translated into new, mutated proteins that might be more useful and effective than their predecessors. For instance, using this AI-assisted system, the original structure of a silk protein might be “remixed” into a novel sequence that could eventually be used to design a stronger and more stretchable version that could be produced synthetically. In addition, a protein mutation might also be then be detected as a change in its sound signature.

Though it’s an innovative step forward with lots of possible applications, currently the team’s method does not allow for these helpful protein mutations to be made directly; rather, these improvements will have to be found through random experimentation — at least for now. In the meantime, people can play around with these amino acid scales to generate their own musical compositions, using the team’s Amino Acid Synthesizer app.