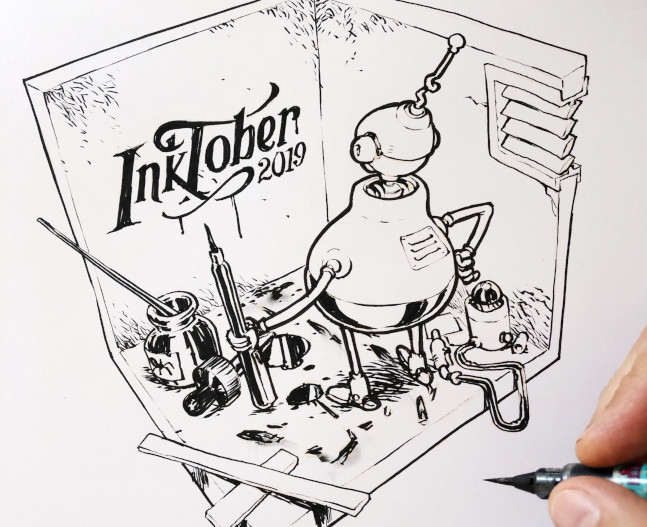 There’s a special online tradition that’s been returning every October since 2009: the annual Inktober event. It challenges artists to share one ink drawing online every day of the month, all the way up to Halloween.

It’s a fun and fascinating moment in time, showing what happens when an online artistic community turns to an amateur AI enthusiast to keep things fresh and funny. But as they use the unpredictability of new technologies as a kind of gonzo muse, there’s a second artistic truth emerging that could subtly shape our future: That at the dawn of an era of powerful new computers, even the innocent act of drawing can move in some very strange directions.

Our story begins with Jake Parker, a professional illustrator whose portfolio includes everything from children’s picture books and graphic novels to artwork for big-studio animated movies like “Rio” and “Horton Hears a Who.” In 2009 Parker started the annual Inktober event, and “Since then it’s exploded,” Parker said in a 2017 video, adding that “tens of thousands” of people participate every year.

He also shares what he’s heard from professional illustrators. “They’ll say Inktober reminded them what it was like to draw for themselves, and how much fun drawing can be.”

It’s grown into a real happening, and this year’s installation features t-shirts, special prizes, and even a party in New York City.

As part of the fun, Parker has also started proudly unveiling an official Inktober “prompt” list each year — basically a set of suggestions for what to draw on each day of the month. He explains in the video that this is important because “Sometimes the hardest part of Inktober isn’t doing the drawing, it’s actually coming up with an idea of what to draw…”

And then someone wondered those prompts would look like if they’d been generated by a neural network?

They took their idea to Janelle Shane, who’s been performing wacky experiments with neural networks over the last few years and then chronicling them on her blog, “AI Weirdness.” Its home page promises the blog covers “the sometimes hilarious, sometimes unsettling ways that machine learning algorithms get things wrong.” In 2017 I was one of the reporters covering her attempts to extrapolate new names for paint colors using an actual Sherwin-Williams list as a training set (coming up with horribly uncommercial abominations like “Queen Slime” and “Porchtingle Gray.”) Later that year Shane used a neural network to try generating the first line of a novel, and she’s also asked the network to generate new fish names, or concoct AI-generated recipes.

“I have only made a neural network recipe once,” Shane jokes on her site, “and discovered that horseradish brownies are about as terrible as you might imagine.”

By day she’s an optics research scientist in Boulder, Colorado, making computer-controlled holograms for studying the brain (along with other light- and laser-steering devices). But Shane has also become something of a go-to person for fun experiments with neural networks — and for when the popular press needs insights from someone who’s actually played around with the technology. (Shane’s been asked to write articles in Popular Science, the New York Times, and Slate, and has also been asked to give talks at several different technology conferences.)

But could she use her experiences of playing around with neural networks to create AI-generate prompts for the illustrators of Inktober?

It turns out that when you need a neural network, there are already several high-powered technologies that are free and available online. The FAQ on Shane’s blog cites the various Jupyter notebooks available free online through Google’s Colaboratory environment, including some by BuzzFeed data scientist Max Woolf.

There’s also image-recognition tools available from IBM’s Watson and Microsoft Cognitive Services. And she points out there are also lots of options if you just want to play around with an already-trained neural network. Last year she even created a step-by-step video tutorial explaining how to make a neural network generate text.

But when she tried to artificially generate prompts with things for illustrators to draw, she discovered she had an unusually small set of training data for the neural network to work from. On her blog, Shane reports Parker has only been providing the prompts for the last four years, a total of just 124 prompts. In her first experiment, feeding the handful of prompts to the sophisticated GPT-2 345-M neural net was “rather like melting an M&M with a flamethrower.” It simply memorized the small list, then regurgitated it back as its prediction of what words would be coming next.

The solution, Shane writes, involved forcing the output to make slightly-less-likely predictions, at which point the algorithm “tends to cycle through the same few copied words from the dataset, or else it fills the screen with dots, or with the repeated words like ‘dig’.”

“Occasionally it generates what looked like tables of Dungeons & Dragons stats, or a political article with lots of extra line breaks.”

But then eventually it did begin generating actual prompt-like suggestions, including “Please submit a monster with unique or special qualities” and “Please spread horror where it counts.” What was most startling was this sudden and startling burst of unexpectedly-appropriate output. “This is strange behavior, but training a huge neural net on a tiny dataset does weird stuff to its performance apparently.”

And in addition, Shane notes, the network is trained on “huge amounts” of online text, “so it’s drawing on words and letter combinations that are still somewhere in its neural connections, and which seem to match the Inktober prompts.” Though Shane reports that it took a while to weed out duplicates from the original list, eventually there were enough AI-generated prompts to create a one-month supply.

Some examples? “Mother in disguise” and “Take control of ostrich.”

Her next step? Tweaking the algorithm to suggest even less likely predictions. The original list had had many line breaks, but those were ignored more often at this setting, Shane reports (leading to suggestions like “Squeakchugger” and “Twelfth meow.”) As she kept turning up the improbability setting, this led to an unexpected surprise, when the neural network began “churning out run-on chains of words,” she said. “I had to search through long stretches of AI garble for lines that weren’t ridiculously long.” Still, eventually, it suggested, even more, prompts for the ink-drawing artists, like “vengeful moon” and “ornery beach sheep”.

But of course, that was just the beginning of the fun. Soon actual artists online began using Shane’s AI-generated prompts to inspire their Inktober drawings:

"tiny cod flames rise" is not a prompt i thought people would be able to draw, but wow https://t.co/hCyVbvdMgE

It was hard to resist the challenge of giving form to the AI’s other-worldly ideas like “Spoon Creature” and “Skull Crusher.” And the suggestions brought an interesting observation from IBM developer advocate Christopher Hiller: “these are all excellent band names.”

By Day One, it was clear that the AI-generated prompts had attracted their own following. “OH MY GOSH there are over 80 of you & I am delighted,” Shane posted on Twitter.

It's #AInktober day 3 and oh my word people are so clever with the AI's bizarre prompts:
– a string of solid ground
– bone familiar
– mallets
– spaghettihttps://t.co/Kt3MqY6ACT

And then as a special treat, Shane promised that every week she’d give advance copies of her book to people sharing their drawings on Twitter. And the drawings became stranger and stranger…

Bird no. 731. Spoon Creature #ainktober .
Oh my goodness okay Janelle Shane (https://t.co/LE1k5IKcWh) used a neural network to generate a bunch of A.I. Inktober prompts and they are ridiculous and delightful.
.
I heard about it from @hannahhillam and her… https://t.co/JPgBr5Mwda pic.twitter.com/b1y9XnkfVv

On her blog, Shane adds that she looks forward to the day when our technology advances so much that a neural network can create the drawings itself.

But in the meantime, as Shane described it on Twitter, “Humans gamely engaging with AI absurdity is one of my favorite things ever.”

SHARE THIS STORY
RELATED STORIES
Snack Stack: Turning Winter Comfort Food up to 11 Golden Paths Start with a Shift Left The Power and Ethical Dilemma of AI Image Generation Models How Jit Builds a Platform Engineering Mindset in the Cloud CES 2023: Robots, Astronauts, Schwarzenegger and Flying Cars
TNS owner Insight Partners is an investor in: Real.
SHARE THIS STORY
RELATED STORIES
It Happened to Me: How I Suddenly Owed AWS $13,000... Platform Engineering Won’t Kill the DevOps Star CES 2023: Robots, Astronauts, Schwarzenegger and Flying Cars A Brief DevOps History: The Road to CI/CD Entrepreneurship for Engineers: Building for Customers’ Love
THE NEW STACK UPDATE A newsletter digest of the week’s most important stories & analyses.
The New stack does not sell your information or share it with unaffiliated third parties. By continuing, you agree to our Terms of Use and Privacy Policy.