On a new podcast by Jack Conte, co-founder of Patreon, serial entrepreneur Ohanian spoke about his latest venture and its focus on equity.
Nov 21st, 2021 6:00am by David Cassel 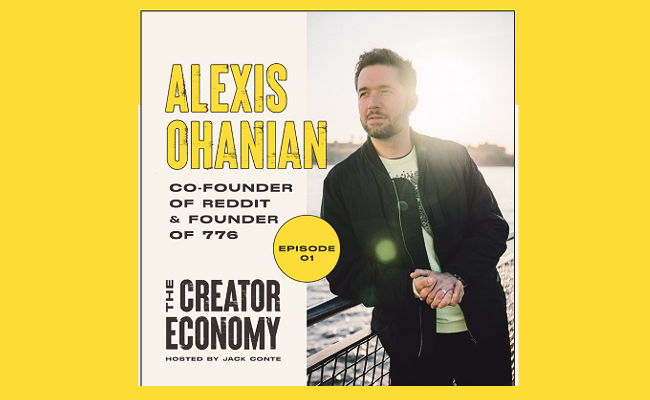 How do you empower the masses — not just to communicate online, but to build viable businesses? Serial entrepreneur Alexis Ohanian is thinking about solutions, along with the related issues of representation and diversity.

Ohanian has serious Silicon Valley cred, as both the co-founder and former head of Reddit, as well as the co-founder of two venture capital firms (Initialized and 776), and he recently shared his grand ambitions on a new podcast from Jack Conte.

But Conte is an interesting guy in his own right — and he’s no stranger to the struggles faced by online creators.

With his wife, Nataly Dawn, Conte formed a musical duo named Pomplamoose, which sold about 100,000 songs online just in 2009, according to NPR. The pair later expanded their income through a YouTube program that offered a 50-50 split of ad revenue to popular musicians.

In an interview on NPR’s podcast “How I Built This With Guy Raz,” Conte recalled how, at their peak, Pomplamoose were also making $400,000 a year just in mp3 sales. Just their whimsical cover of the theme to the Angry Birds videogame has racked up 5,372,140 views since it debuted in 2011 — and Pomplamoose’s YouTube channel now has more than 1.3 million subscribers.

So his interview with Ohanian became an almost historic meeting of minds, since somewhere along the way, Conte also became the co-founder of Patreon, a company now valued at over $1 billion (according to a January profile by NPR).

But more importantly, Patreon offers at least a partial funding solution for over 200,000 creators. And this week, Conte announced that Patreon itself will become a video-hosting platform. Ultimately. Conte sees the launch as part of a larger movement, and hoped to explore this vision in a new podcast called “The Creator Economy.”

And the obvious first guest was Ohanian, who was one of 17 angel investors and VCs who’d originally contributed $15 million to Patreon’s Series A round of funding.

Ohanian shares Conte’s faith in the untapped potential of the online masses. In 2014, Ohanian told Esquire, “My entire career has been built on the understanding that I am not only not the smartest person in the room, I am definitely not the smartest person in the world. And I am instead going to try to create as many opportunities to connect those great ideas and help them be great.

“If I can accomplish anything in the next however-many years, it is this: to help a generation realize, or to think of themselves not just as consumers, but also creators.”

Leaning in — to Others

Ohanian begins his appearance on Conte’s podcast by listing other successful early investments in companies like Instacart and Coinbase, then attributing those choices to “leaning into a strong founder network — and making yourself really open to being taught new things and being default curious and insatiable when it comes to basically what smart people are thinking about, talking about, and building and doing.”

It’s a theme Ohanian returns to later in the interview, saying he’s attracted to investing in a founder “who deeply understands a market or the customer or something and can teach me something new.”

But it’s also a deeply-felt topic that Ohanian has considered carefully. In a June blog post, Ohanian wrote that the killing of George Floyd launched him on a path of introspection and life-altering decisions (including leaving the board of Reddit).

Ohanian later wrote on the website of Seven Seven Six, his new venture capital firm, that “Surely there were greater founders, greater businesses, and greater returns that I could have invested in — had I only been more intentional.” He even proclaims on the site that his venture firm “will be my legacy, and I hope all of you will join me and our team on this journey. We won’t be perfect, but we will keep striving to be better.”

The firm sums up its ambitions in an ambitious tagline that appears on the company’s social media feeds: “Going back to the very first starting line to reimagine how we identify, support, and scale Greatness.” Ohanian points out on the podcast that 40% of all VCs went to Harvard or Stanford, then asks, “Think of what happens as more and more people are able to invest?”

A recent article in Forbes summarized Ohanian’s hopes for “a post-pandemic new-look VC firm,” quipping that it “operates on Ohanian time, which means being fully remote, asynchronous and what to the outside world can seem a chaotic, if creative, blend of time zones and projects.” (776 uses custom software that enables the firm to asynchronously communicate throughout the entirety of the investment process — including introductions and networking.)

The ultimate hope, Ohanian said on the podcast, is to “start to surface a lot more in the network that we aren’t even aware of existing.” Even the firm’s web page describes it as a VC firm “founded by builders, built with software, in order to be the very best at supporting founders that are changing the world.”

But the company also took a unique approach to finding operating partners. “We didn’t ask for resumes, LinkedIn links or MBA credentials,” said founding partner Katelin Holloway in a blog post. “We asked for builders. And we asked for their perspective.

“Within nine hours of the job being live, the 101st submission was logged. We celebrated, not because we’d hit our goal, but because we were overwhelmed by the quality, sincerity, and hunger of our candidates.”

The hope is to produce an annual “evergreen” program, attracting fresh crops of talented people from a wide range of backgrounds that they can train into operating partners — ultimately broadening the kind of companies that get funded and providing them with better support.

“Our program aims to educate and engage the next generation of high-return investors — whose broad range of operating backgrounds, networks, and perspectives allows them to identify more complex and comprehensive trends,” Holloway wrote. As the firm’s Operators in Residence, she wrote, they’ll support the founders with their expertise, and “at the end of the year, we’ll support them in landing their dream jobs in venture capital. ”

The carefully chosen team — Hiram Vazquez, Travis Mason, and Cristina Georgoulakis — started in January, ultimately getting “a front-row seat to every part of building this new firm, including deal reviews, launching a new fund, and learning about the mechanics of venture capital,” Holloway wrote. “We feel that if we continue on this path, we can easily scale this program every year, creating deeper levels of support and inviting many more unique voices into our industry.”

On the podcast, Ohanian spoke more about Seven Seven Six’s initial team of Operators in Residence. “The three that we selected all have a decade-plus of experience at top startups like Hitters, all of them,” Ohanian said. But he also expressed pride that 81% of the applicants self-identified themselves as underrepresented, “which really just means you’re not a white dude, but it goes to show, there is a ton of talent that is not just ready and interested to break into the industry, but also has the exact skills that founders want.”

Ohanian told the podcast audience that he’s hoping this launches a new era in venture capital, because if venture capital firms don’t become much more sophisticated, he sees a future where instead it’s new-fangled decentralized autonomous organizations (or DAOs) that end up allocating all the capital. (Think open, decentralized, communally-driven investment vehicles tracking transactions on a blockchain.)

He finds the underlying technology “very interesting. And a small percentage are going to be very formidable and very effective.” Ohanian belongs to a blockchain himself, and has watched its collective group discussing investments in group chats online, “And I’m just, holy shit, this is working?”

“And again, we’re still in the early days, there’s a lot of cash grabs,” he added. “There’s a lot of charlatans but the underlying tech is real. It seems to be working. And do I think a collective of people voting can do as good or better of a job than a whole heck of a lot of people individually? Yeah, for sure.”

But his faith in social media still shines through. At one point in the podcast, Ohanian described our moment in time with “an empowered global community able to coordinate and talk and share ideas and collaborate,” though he thinks some of its passion is coming from the financially disenfranchised. (“I hate to keep going back to something as base as the financial part, but … “)

Interviewer Conte sees a coming rebirth of creativity — one that’s driven by the availability of cheap tools for creating and distributing content — but agrees there’s a crucial role or financing.

“The last remaining puzzle piece is the business model, the infrastructure to help these creative people build their businesses and become full-time artists,” Conte said. “When that monetization architecture reaches scale, we will experience a second Renaissance with a spirit and energy that makes the first Renaissance look like a kid’s crayon drawing on a fridge.”

And Ohanian summed up his own general enthusiasm later in the show. “I would never bet against the sort of creative power of a community, all aligned versus even the best-funded, traditional sort of top-down creator. There’s no amount of creativity that one person alone can have versus a collective.”

Towards the end of the show, the discussion turned to hopes for the future of the creator economy — and Ohanian is ready with an answer. “I want to live in a world where a kid can have a singular ambition in life which is just to create and have a clear path for how she can do that for a living, making a great life for herself and for her family.”

“I get especially motivated because I think it means a path for people that doesn’t require those traditional gatekeepers. That also means a lot of the communities, disproportionately communities of color will finally get what they are due because this next generation of creators won’t need gatekeepers to get them on a record label or give them a platform. They can just create, they can just build.”

SHARE THIS STORY
RELATED STORIES
It Happened to Me: How I Suddenly Owed AWS $13,000... Watch Out, Attackers Have Their Heads in Your Cloud! Golden Paths Start with a Shift Left Java's James Gosling on Fame, Freedom, Failure Modes and Fun The Power and Ethical Dilemma of AI Image Generation Models
SHARE THIS STORY
RELATED STORIES
How We Manage Incident Response at Honeycomb Tech Works: How Can We Break Our Obsession with Meetings? 2022 in Review: AI, IT Armies, and Poems about Food It Happened to Me: How I Suddenly Owed AWS $13,000... SRE Housekeeping: Where to Get Started for New Hires
THE NEW STACK UPDATE A newsletter digest of the week’s most important stories & analyses.
The New stack does not sell your information or share it with unaffiliated third parties. By continuing, you agree to our Terms of Use and Privacy Policy.