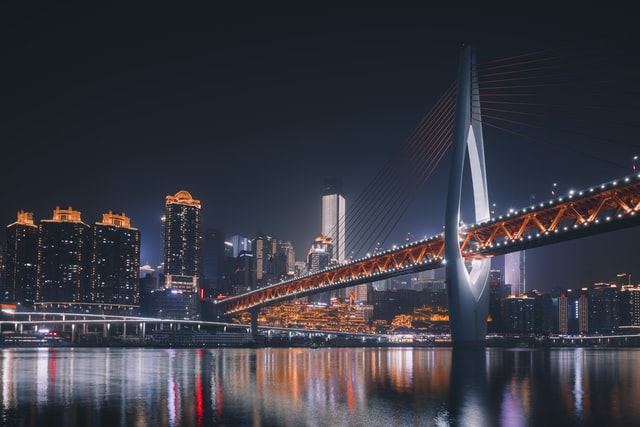 Alibaba’s open source projects are by far the most active among Chinese enterprises according to the “GitHub 2020 Digital Insight Report.” The relatively small PingCAP comes in second, followed by the more well-known Baidu, Tencent, JD, and Huawei. It is far from definitive, but the X-Lab research team’s report provides a fresh look at open source in China and around the world.

Activity is measured by how often comments, pulls, forks, and stars (which includes watches) occur. Across many entities, including its cloud operation, Alibaba had almost ten times as many code repositories as PingCAP in 2020, but the latter’s TiDB is one of the world’s most active database projects and the top GitHub repo in China according to the report.

The rankings are substantially different from those in the Open Source Contributor Index, which identifies the company affiliation of individuals based on the domain of their email address. While U.S.-based companies top that list, Alibaba, Huawei and Tencent all show up in the top 25 worldwide.

Using GitHub statistics has limitations. It does not capture all development from non-English speakers, especially those without advanced degrees. Efforts to make Gitee a Chinese alternative have met limited success. Some people have migrated Java applications to the platform, but that may be coming from corporate-led projects rather than grassroots developers.

Alibaba’s most active projects deal with frontend and cloud native use cases. Ant Design is a React UI library and Nacos is dynamic service discovery, configuration and service management platform for building cloud native applications. Notably absent are data-related projects, which the company has largely either worked on internally or focused on efforts with an Apache angle to them. 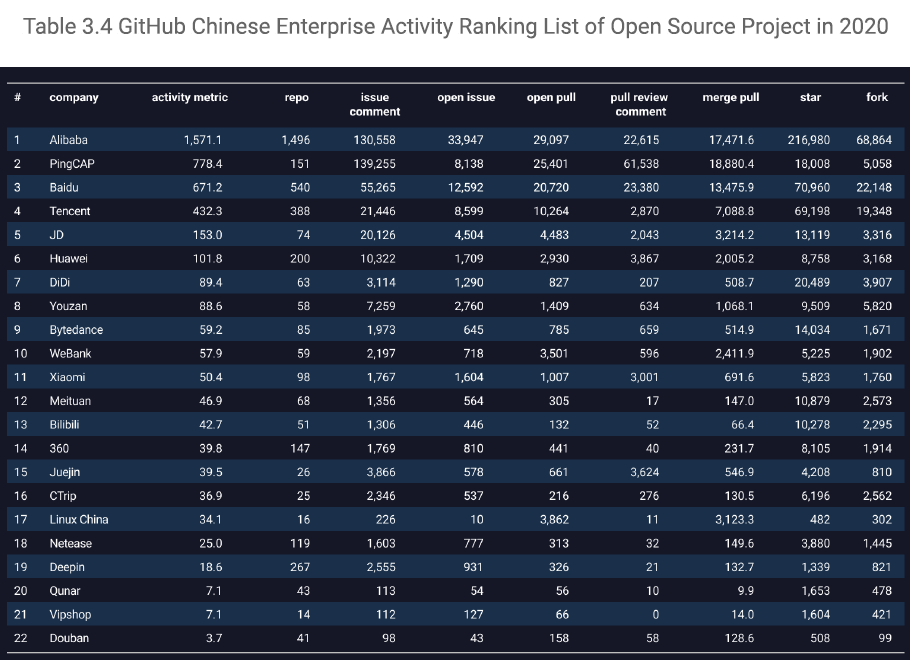 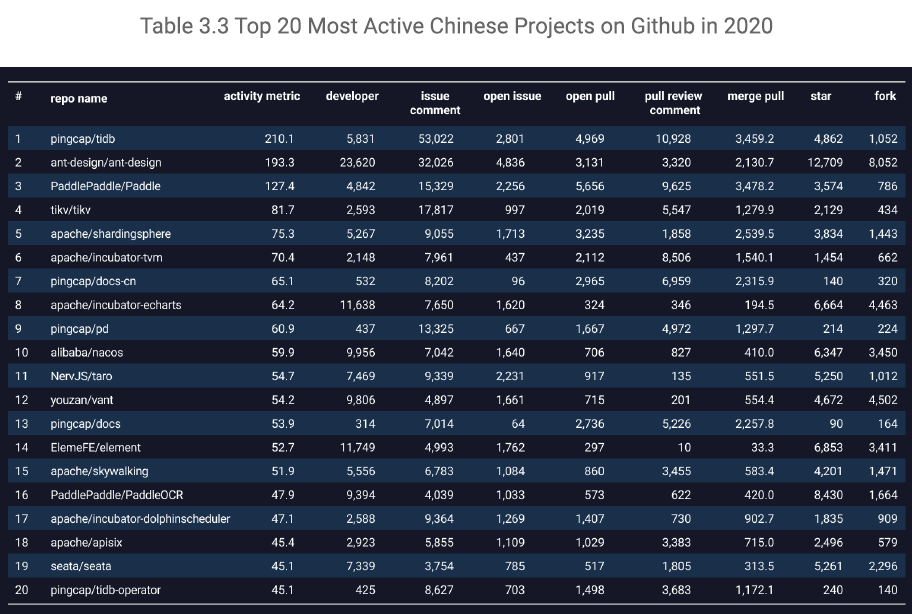 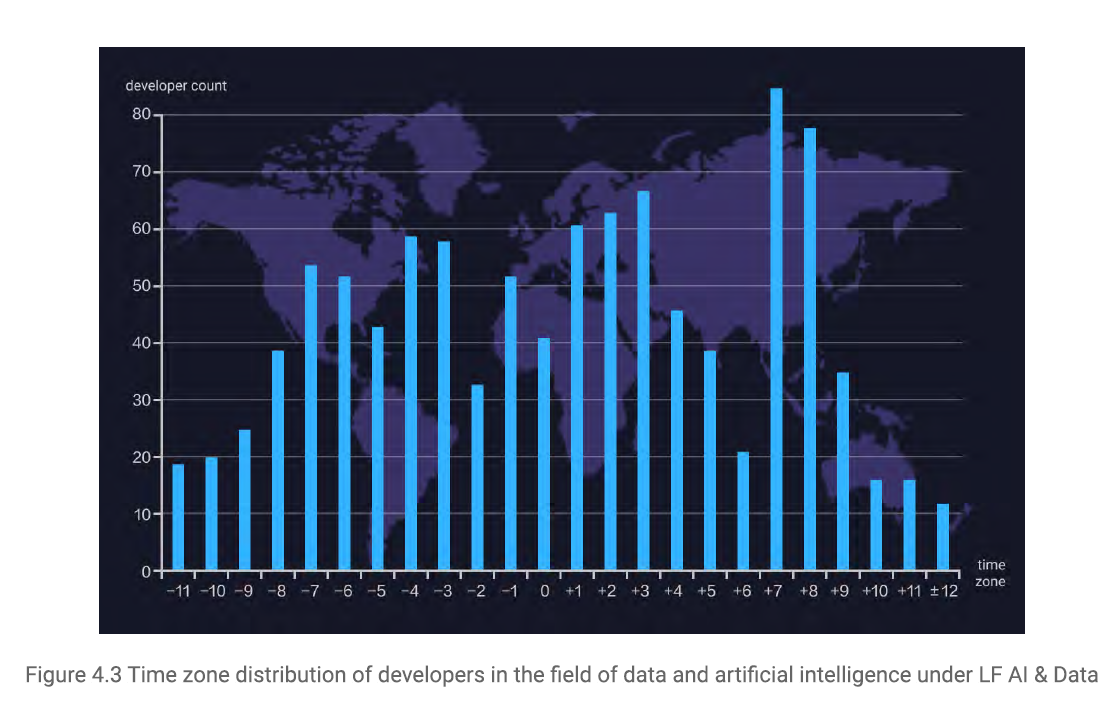 The largest cluster of Linux Foundation AI and Data Foundation project developers is located in China’s time zones. Baidu, Huawei, Tencent are represented on the foundation’s board, but Alibaba has forged a different path, with some of its data projects having moved to the Apache Software Foundation in the past. Source: “GitHub 2020 Digital Insight Report.” 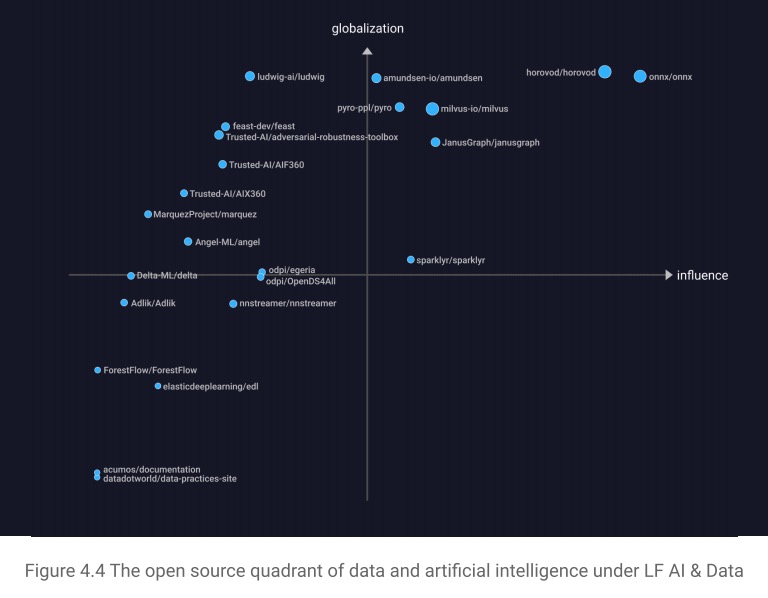 Using graph analysis, the level of influence a project has is based partly on the strength of relationships between developers and projects. Many of the projects in the foundation are young and focused on a narrow niche topic, so their sphere of influence is so far rather narrow. Source: “GitHub 2020 Digital Insight Report.”