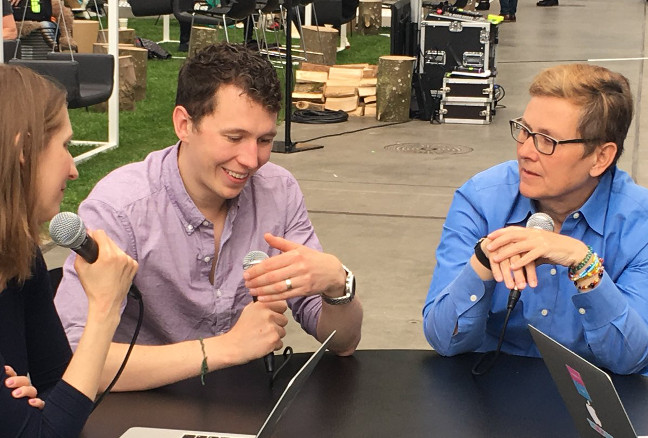 At KubeCon + CloudNativeCon in Copenhagen in early May, we caught up with Red Hat‘s Brandon Philips, to discuss the state of CoreOS and containers as a whole. Philips was previously with CoreOS, which was acquired by Red Hat back in January, and the pairing has focused a good amount of Linux thought leadership on the Kubernetes project. In Copenhagen, he and Diane Mueller, director of community development at Red Hat, sat down to talk about what it’s been like merging the CoreOS and Red Hat teams.

The CoreOS team, and Red Hat overall has been working closely with the CNCF to expand the capabilities of Kubernetes for enterprise users. One big part of this effort has been the Kubernetes Operators Project, said Philips.

“What we’ve seen in the public clouds is essentially two pieces of software: The hosting bit which has been a business for a long time, and then there’s kind of this software delivery piece, and for a while now open source software outside of the single server hasn’t had a way of delivering its value across clustered and multi-server environments,” said Philips. “And I think with Operators and what we’re trying to do at CoreOS, the vision that we are continuing to execute on at Red Hat is: How do we make it possible for people across their data centers, across their clouds, bring software — whether it’s open source or non-open source — bring that cloudiness to all those different environments, and without duplicating the work every time they have to move where those servers are being hosted.”

“The idea here is that out of the box, Kubernetes gives you these abstractions of a pod, a deployment, a service. And these are kind of just fundamental compute things which essentially allows you to run a piece of software and then give it network connectivity. Those are fundamental basic building blocks. What we find people doing, and why the public clouds have taken off so much for developers is they are able to not just say I need a VM, but I need a database, or I need a load balancer. What the Operator is doing is adding new nouns to that basic language of compute, network, and storage. Now we’re able to say compute, network, and storage, but also load balancer, also database, and also a Spark queue. Those abstractions are what make developers so effective,” said Philips.

Operators are now a big part of Red Hat’s Kubernetes plans, said Mueller. “I think it’s been an evolution because, first, we were trying to convince everybody to put things in containers. I think this is the next step of community education that we’re going to be doing over the next coming months is; what is an Operator, how to create one, and what are the different use cases for them. So, from my perspective I think that’s really where the community is going to have to step up and start working and creating these new Operators,” said Mueller.