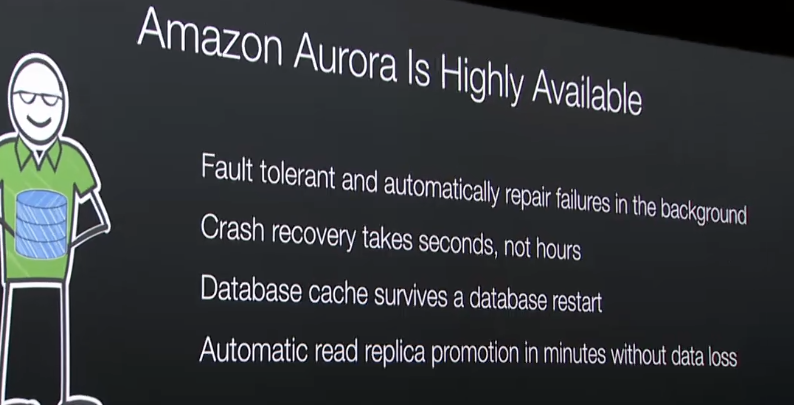 Editor’s Note: We are are at AWS re:Invent this week where I will be posting about AWS news and reports from the show floor. I am particularly interested in the developer tool ecosystem players so I expect to spend most of my time talking to users and the companies here that are part of the AWS ecosystem. Expect a series of short posts from the conference — a bit different than what we usually do. But the goal is to give a flavor for who’s here and the pulse of what’s happening in this new stack world.

AWS launched a MySQL compatible databases called Amazon Aurora at AWS re:Invent this morning. The database is designed to be fault tolerant, scalable and an alternative to to high-end SAN environments.

It is compatible with MySQL and can scale to run six million inserts per minute.  It is available through the AWS RDS service.

The relational database will add storage in 10 gigabyte increments on an as-needed basis. It can scale up to 64 terabytes. Storage scales in a linear fashion as more data is stored.

According to the AWS blog, storage is replicated across three AWS availability zones with two copies of the data in each availability zone. Aurora also has concurrency and self-healing built in and is distributed across SSD-powered storage.

According to AWS, with this method, data is backed to Amazon Simple Storage Service (S3), which is done in parallel without imposing any load on the database instance. Instant backups are automatic.

Aurora is what we see often described as a converged system.  It combines the “storage, network, compute, system software, and database software.”

The news from AWS today is another example of the shift to new stack architectures that can take advantage of distributed infrastructures that their predecessors just can’t match.

Alex Williams is founder and editor in chief of The New Stack. He's a longtime technology journalist who did stints at TechCrunch, SiliconAngle and what is now known as ReadWrite. Alex has been a journalist since the late 1980s, starting...
Read more from Alex Williams
SHARE THIS STORY
RELATED STORIES
MongoDB Partners with Databricks for App-Driven Analytics Dig Security: One Tool for Multicloud Data Security How to Lower Your Company‘s AI Risk in 2023 Presto: Data Analytics on an Open All-SQL Platform Why So Many Organizations' Artificial Intelligence Initiatives Fail
SHARE THIS STORY
RELATED STORIES
Bit.io Offers Serverless Postgres to Make Data Sharing Easy Is the Answer to Your Data Science Needs Inside Your IT Team?  Redis Data Types: The Basics Why So Many Organizations' Artificial Intelligence Initiatives Fail Boost Customer Engagement with Real-Time Data
THE NEW STACK UPDATE A newsletter digest of the week’s most important stories & analyses.
The New stack does not sell your information or share it with unaffiliated third parties. By continuing, you agree to our Terms of Use and Privacy Policy.