Why is Amazon Building A Giant Biosphere in Seattle? 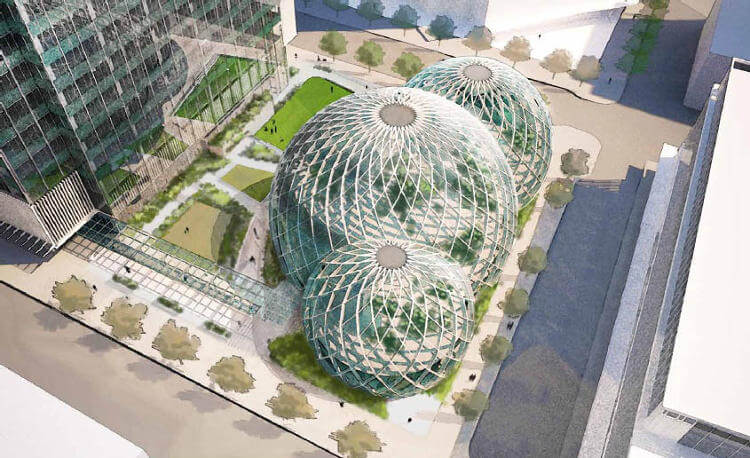 Construction has begun on the long-anticipated three giant biosphere that Amazon is building in downtown Seattle. Workers can be glimpsed attaching glass panels onto steel frames. “Who needs a boring office park when you have a 65,000-square-foot glass dome?” joked Fast Company’s CoExist site.

Bloomberg describes the three intersecting domes as “gigantic spheres resembling melted-together Milk Duds in the shadow of their new 500-foot-tall office tower.” Each one will be 100 feet tall, and together they’ll host plants from around the world — more than 300 different species, many of them endangered — and even trees. “[A] plant-rich environment has many positive qualities that are not often found in a typical office setting,” says an Amazon planning document, promising a three-block area where employees can “socialize in a more natural, park-like setting” — at mild temperatures between 68 and 72 degrees. 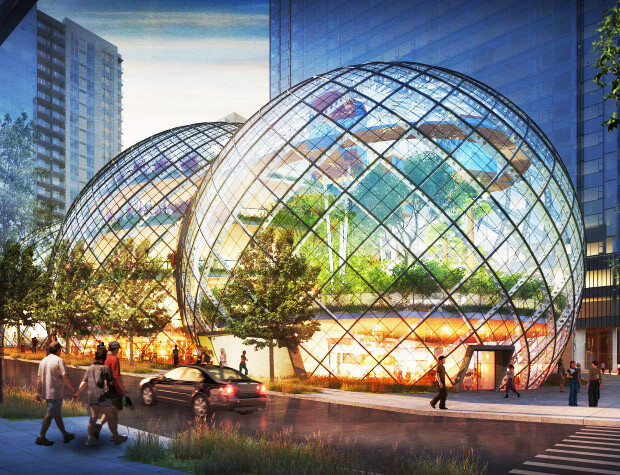 Besides the plants, Amazon’s biosphere will also include workspaces — sort of. “Amazonians will be able to break from their daily labors to walk amid the greenery along suspension bridges,” reported Bloomberg, “and climb into meeting spaces resembling bird nests perched in mature trees.” It will include places to eat, meet, or just lounge in the greenery. It’s apparently meant to be more of a woodsy retreat than a pressure cooker. Workers will be able to come and go freely, so it won’t resemble Stephen King’s “Under the Dome,” which encapsulated an entire town trapping residents. Fans of Margaret Atwood may also find the new dome to evoke her 2003 dystopian sci-fi novel “Oryx and Crake.”

Although it won’t be open until 2018, it already begs the question: Just what is Amazon up to? Bloomberg suggests the idea is part of a new trend, where giant technology companies cling to city campuses because that’s where millennial workers most want to live. “LinkedIn consolidated staff scattered around San Francisco into a 26-story tower in March. Salesforce.com will be the anchor tenant in a 61-story skyscraper a few miles away.” Uber, General Electric, and McDonalds are all moving workers into city centers. Amazon’s Jeff Bezos may see this as a perk he can deliver to his workers just by hiring the right architects to design an appropriate patch of real estate.

But maybe that’s the real issue. When finished, Amazon’s campus will sprawl over 10 blocks in downtown Seattle, occupying more than 15 percent of the city’s inventory of office space. The owners of Seattle’s Space Needle are already complaining that tourists can’t even see the Space Needle in many parts of time because it’s blocked by all the city’s new office buildings. A local Seattle geek is even working on a children’s picture book describing the Amazocalypse, where a friendly monster (with a little dog named “Prime”) who travels the city to help a little girl named Zoe figure out where the Space Needle has gone. 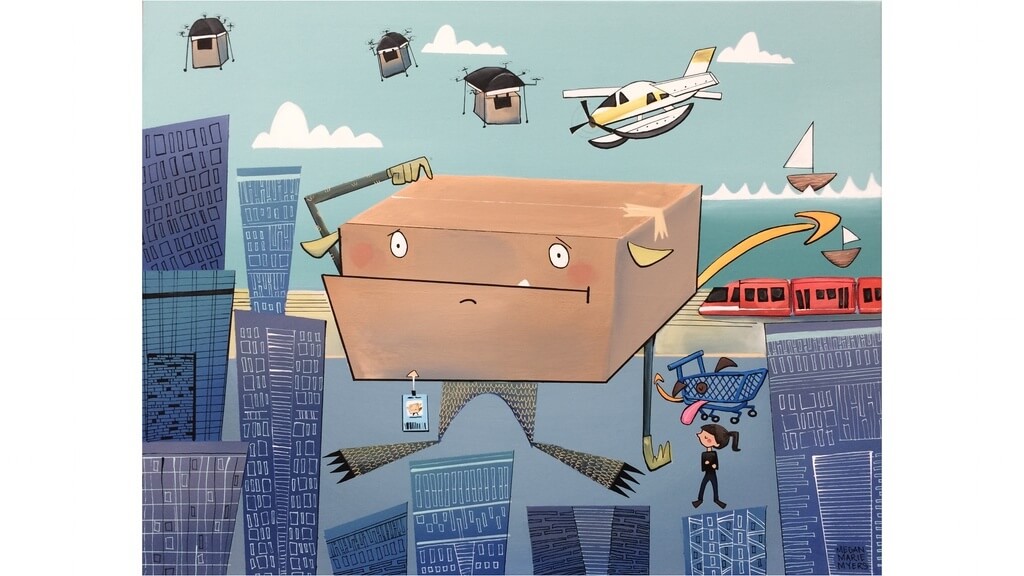 Of course, not everyone’s unhappy about the new construction. “We got to the Space Needle for dinner for our anniversary every summer, and we’re of the opinion that the South Lake Union building boom has dramatically improved the view,” one reader posted on Slashdot. “That used to be a run-down neighborhood of warehouses, abandoned buildings, and parking lots, now it’s actually something interesting and attractive to look at.” Bloomberg describes a neighborhood transformed from “a hodgepodge of car dealerships and second-hand stores into a vibrant business district where people could work, live and hang out.”

Amazon even leases the first floor of their office building to a handful of carefully-selected restaurants, coffee shops, and upscale bars, which is either a delightful attempt at urban revitalization or a creepy example of corporate dominance over a local neighborhood.

But maybe it’s all part of a larger charm offensive. At some point, Amazon must’ve realized that its mega-business draws public scrutiny, and it has a big stake in its own public image. Two years ago Amazon began offering tours of their fulfillment plants in six different U.S. cities, which are now also available in Germany, Spain, France, Italy, Poland, and the United Kingdom.

And now Amazon is even offering tours of their main Seattle headquarter, pointing out to visitors that Amazon is “home to more than 2,000 four-legged friends” on the tour’s sign-up page.

A reporter from the Guardian newspaper went along on Amazon’s very first tour, where he discovered “a sparkling PR effort — and free bananas” (courtesy of Amazon’s “community banana stand,” which offers bananas to anyone passing by):

“A group of twentysomethings are laughing around a rooftop fire-pit overlooking sailboats on Seattle’s Lake Union. A team of software engineers huddles round a laptop while sipping lattes in wingback chairs. And a tiny Boston terrier is running around squeaking a squeezy toy…”

As the world continues to change, the Guardian’s reporter seems to wonder if Amazon is attempting to become something more — maybe a good neighbor, or a cultural icon, or just something more interesting to look at than the Space Needle. He asked a fellow tourist —  a freelance writer —  if Amazon’s campus tours could compete with other Seattle landmarks like the first Starbucks store or the Space Needle.

“I could see that,” the writer replied. “Especially if it’s free, done in an hour, and you get free bananas at the end.”