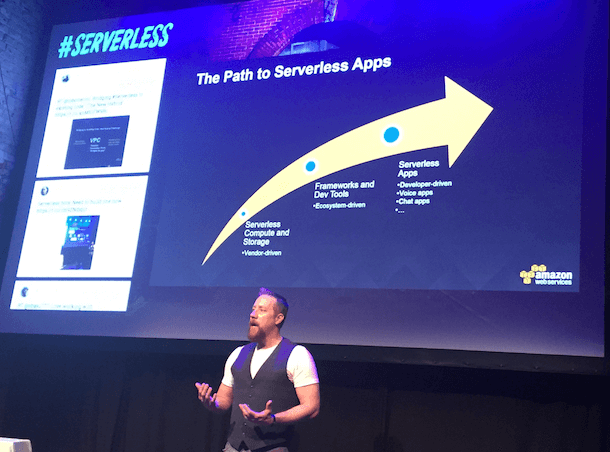 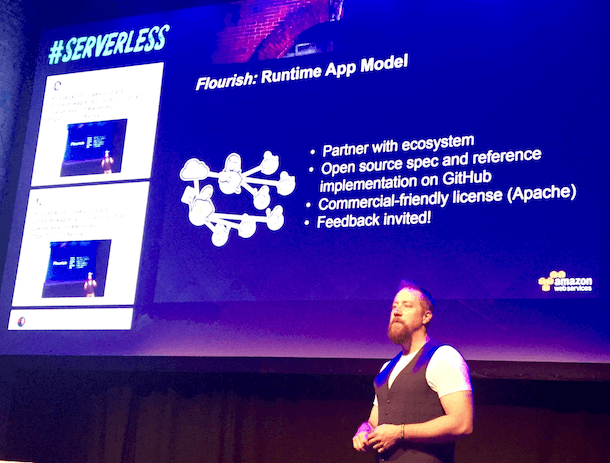 “Flourish aims to grow a runtime app model similar to the way SwaggerHub does today for APIs,” Wagner said in his keynote.

One of the key components of the serverless paradigm is that functions are the unit of deployment and scaling. Wagner argues that Platform-as-a-Service is the wrong level of abstraction to make scalable applications as it hides the requests from the system. This is where serverless shows its benefits, as simplicity is introduced, Wagner says:

#serverless is the drive-thru model: "You pay for the hamburger not the cow"- #AWS @timallenwagner #serverlessconf pic.twitter.com/Ba39Yg0Lg0

Wagner said that while this is the advantage, serverless applications then need to be built in a composable form that is beyond needing to manage one function.

“What happens when you have built a single microservice that uses a number of APIs and makes use of hundreds of functions?” he asks. To enable this level of growth, Wagner says, code-first and design-first solutions have emerged. He pointed to the Serverless framework from AWS as a code-first example, and how SwaggerHub builds APIs as a design-first example.

Wagner wants Flourish to “bring the code function and the API interface definition together in the same model.”

He proclaims that Flourish will not replicate the previous application problems of the monolith, as functions will still remain independent and will be updateable as individual components rather than as a massive code block. Functions will be grouped into collections in the Flourish model: “Flourish is a versioned collection that enables rollback without turning functions into a monolithic deployment.” He says Flourish will be able to compose together “not just functions but NoSQL datastores, APIs, and all the pieces of the pie that make up a serverless application.”

Wagner believes this is needed to evolve the serverless trend to a point where an ecosystem of developers are driving the creation of serverless apps, include chatbots and voice apps. He documented a number of ecosystem tools that ill be needed to be created to help drive the uptake of the serverless application paradigm, including dev tools, frameworks, data processing, and monitoring, amongst others. 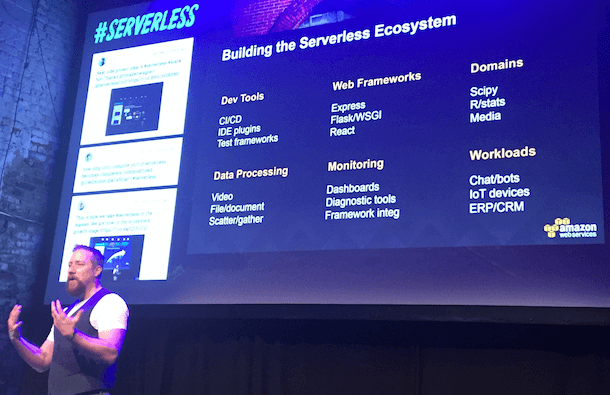 “One of the things I am most excited about is data processing: as we go up the stack, we are going to need more solutions at the application-inspired level, for example, splitting up a video, and running facial analysis. We will need scatter-gather paradigms,” Wagner told the packed conference audience. “We are now in the frameworks and dev tools stage where the ecosystem is growing and enabling companies to start their own serverless journey. Through Flourish, in the next stage, we want to get to a mass of developers where there is a self-fulfilling cycle that is driving vibrant ecosystems.”

Flourish will be open source, and will be launched as a project on GitHub in the coming weeks.