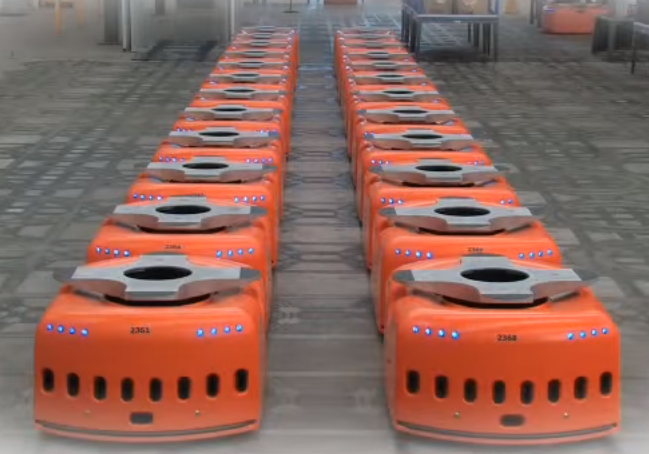 The next two months may see the biggest online shopping spree in human history — and Amazon is ready. It’s been building out its robot-enabled warehouses in preparation for this year’s holiday shopping season, and last week CNN’s tech reporter Matt McFarland decided to take a look at the progress.

Visiting a warehouse in Baltimore — a former GM plant — McFarland reported that each of Amazon’s “fulfillment centers” stocks a whopping 15 million items. Amazon has automated the process of getting them into packages. Robots need less room to maneuver than human employees, meaning Amazon can pack 50 percent more inventory into every warehouse. And it makes life easier for the warehouse employees too. Instead of walking to the shelves, the shelves now come to them — delivered by little motorized robots that scurry across the floor like a Roomba vacuum cleaner, while carrying the appropriate shelf of products.

It all represents that rare novelty for technology reporters: a human interest story that’s almost completely devoid of humans. (CNN filmed a similar report in 2014, headlined “See Amazon’s New Robot Army.”) But to understand how we reached this moment in time, you actually need to look at the history of these robots.

Amazon robots are built by a company that was originally named Kiva — a Hopi word which means “meeting place of the ant people.” The company’s founder, Mick Mountz had been a member of the web processes team at WebVan — a failed ’90s-era startup that had promised speedy home deliveries. He decided the issue was the high cost of fulfilling each order, and teamed up with two experts in engineering and robotics to create a way to streamline the process, according to Forbes. It was the perfect time, since the cost of robotics had been steadily falling. “Kiva wouldn’t have been possible five years prior to when I started working on it.”

Staples let him try a test pilot program in 2005, using 15 robots in a Dallas facility, and after 10 weeks they were convinced. Within a year Staples was testing another 30 robots in Pennsylvania and discovered it doubled their workers’ productivity. By the end of 2007, they were using 500 robots in their warehouse. It turned into a turnkey solution — within a day, 50 robots can be set up, supporting five packing stations, for less than $3 million.

Eventually, they also had deals with other big box retailers like Walgreens and The Gap, as well as Office Depot, and Toys “R” Us. But Kiva began servicing Amazon exclusively after being acquired by Amazon for $775 million in 2012 — and it’s now rebranded themselves as simply “Amazon Robotics.”

An article in Supply Chain Digest suggests Amazon had worried it might’ve needed to compete with other retailers offering speedy robot-enhanced delivery systems — although the acquisition now instead locked competitors out of using Kiva’s robots. But a senior manager at Amazon said that had simply utilized every bit of Kiva’s capacity as they launched their aggressive push to build more distribution centers scattered around the U.S.A.

Today, this seems to have triggered a kind of robot war. “In Fight Against Amazon, Walmart Doubles Down on Robots, Warehouses,” reported Reuters. By the end of this year, Walmart will have doubled their warehouses serving their online operations — from five to ten — so they can ship quickly to more parts of the country. But it’s also in the process of automating their sorting and improving their tracking. This year they invested $1.1 billion in e-commerce and other digital initiatives, and though it only represents 3 percent of their sales, it’s acquired 15 e-commerce startups in just the last five years.

Of course, Amazon has forty warehouses, according to data Reuters compiled from Channel Advisor — over a million square feet — with plans to open five more new warehouses within the next six months. Amazon handles $107 billion worth of online sales each year — while Walmart handles just $13.7 billion. So Amazon’s definitely got a head start. Amazon now uses about 45,000 small robots scattered around about a third of its warehouses around the USA, according to an article this week in the Wall Street Journal. But there’s also human workers — over 3,000 working just in the Baltimore warehouse alone. And according to CNN, “Amazon hired 76,700 new employees in 2015 and 38,100 in the first six months of 2016 as it builds out its distribution network around the country.

Each Amazon  robot is scarcely one foot tall but can lift 1000 pounds “The robots know the fastest path to an Amazon employee,” McFarland explained. Describing the technology in 2012, MIT’s Technology Review observed that “From above, the scene looks a little like robot rush hour as dozens of shelves zoom around the warehouse floor.” And since employees aren’t walking around the warehouse, that leaves them with more time to focus just on grabbing things off the shelves. Describing an earlier version of the system, in 2009, Forbes reported that “When a bot sidles up to a human picker, an overhead laser paints a dot on the item on the pod that the human should pick up.

“An adjacent computer screen flashes the quantity the packer needs to put in a box to fulfill an order….”

Amazon’s pickers then scan your purchase and drop it into a yellow bin, where it’s whisked away for somebody else to pack. That’s all they do. “Immediately, a new bookshelf that had been waiting its turn pulls up to the picking station, like a car in the line at a fast food drive-through,” McFarland wrote.

Those yellow bins take a pretty exciting journey, too, launching your purchase on a journey down eight miles of conveyor belts. The first stop is a packing station that’s also automation-assisted. Computers calculate the best possible box to use, and even how long each strip of packing tape should be. “The only decision the packers have to make is how much bubble wrap to include,” explained CNN. “Each package gets under a minute of human contact.”

“By the time you take an Amazon delivery off your stoop, walk into your home, find a pair of scissors and open the brown box, you’ve already spent nearly as much time handling the package as Amazon’s employees,” McFarland wrote.

Even the shipping label is affixed by a robot, often on boxes that don’t even stop. And as the packages travel down that last mile of conveyor belt, they’re scanned by red lasers to determine which shipping chute they should be sliding down. The last time a person touches your package is when it’s lifted from the chute onto a shipping truck.

Of course, there’s also a proprietary software system powering the robot that keeps everything going. “The software constantly analyzes incoming orders, keeping tabs on what items are most popular,” Forbes explained. “Over time the software directs the bots to move the pods with the most popular items toward the front of the shelving area and the least- ordered merchandise toward the back.”

Of course, this raises the inevitable question about whether the robots are taking jobs away from humans. Citing MIT economist Erik Brynjolfsson, the Journal reported Wednesday that Amazon’s robots “aren’t dexterous enough yet to identify different sized packages, pick the right ones and place them safely in boxes — although robot researchers are working on it. The number of total jobs in the tech industry has been steadily declining since 2000. Looking ahead, analysts predict $1.2 trillion worth of human activity will be automated away over the next nine years.

In fact, one Silicon Valley company has already built a robot night watchmen — and it’s already being used at Microsoft’s campus in Mountain View, California. “Robots don’t complain,” says one of the company’s co-founders. “There’s no pension. And there’s no worker’s comp.”

Monitor Your InfluxDB Open Source Instances with InfluxDB Cloud
May 25, 2021