GitHub Enterprise is now supporting Amazon Web Services (AWS) as part of an “all new” update to its service. The news came from the GitHub blog this morning along with a series of other new updates.

GitHub offers three ways to use GitHub Enterprise on AWS. 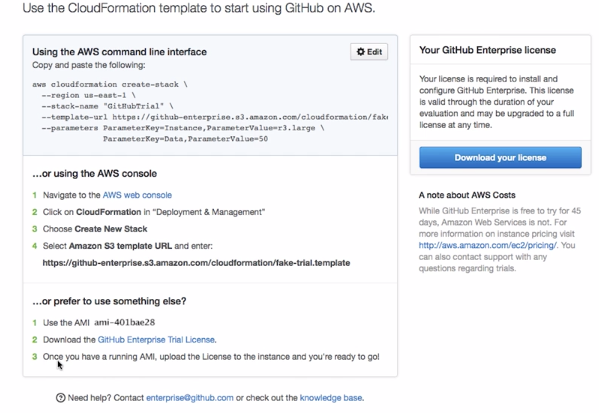 The integration shows how powerful AWS has become in the ecosystem. Customers are using their own infrastructure but the w workloads on AWS are continuing to scale. This is an effort on GitHub’s behalf to accomodate for that migration to AWS. It also shows how GitHub is trying to make the service more viable to developers and IT who have historically not been deep users of code sharing and collaboration technologies.

It’s clear the AWS service is pretty green. Users have to make sure they are using a later version of GitHub Enterprise, in particular 11.10.344 through 11.10.348. GitHub built out its own infrastructure on GitHub Enterprise and AWS to accomodate for the new service. Once set up, the user then makes a backup of their existing instance and uploads it to AWS where it can then be accessed.

The overall process looks fairly straight forward in the video explanations which show how to host GitHun on AWS with EC2, how to add EDS volumes, tagging, security groups and SSH key pairs.

Of note is the AWS authentication process with the GitHub Enterprise license. The Administrator sets up the instance and then shares the password with the others on the team. This seems a bit insecure as password sharing can be a practice that attackers can exploit to get access to the instance itself.

GitHub executives said in an email:

Our security team recommends using a secure password management service such as LastPass to share the password amongst the team. Additionally, admins can lock access to the GitHub Enterprise management console down by restricting access to port 8443 / 8080 via a firewall or security group.

Here’s the into for set up:

A more detailed video shows how to move to the new AWS service:

GitHub Enterprise also has a number of new services available:

GitHub Enterprise has a number of new features, including SAML support that can be integrated with services such as OneLogin, PingIdentity, Okta, and Shibboleth. The integrations allow for single sign-on with these “identity providers to manage your organization’s users from one place or manage app access for groups of users at a time, rather than individually.”

As I wrote for TechCrunch in 2012, the GitHub Enterprise service was supposed to be GitHub’s route to success. The company received $100 million in 2012 from Andreessen Horowitz so it could build an on-premise technology that developers could deploy code and collaborate with other developers.  It integrates with any open virtualization format (OVF).  The package system was designed to make it easy for developers to upgrade from current version up to latest version of the software. Upgrades will be made weekly and quarterly.

It’s unclear how much of a success GitHub has had. And how it compares to services from companies such as Atlassian is also unclear. But without a doubt this integration with AWS helps make social coding more applicable to the process of development on a distributed infrastructure.

Alex Williams is founder and editor in chief of The New Stack. He's a longtime technology journalist who did stints at TechCrunch, SiliconAngle and what is now known as ReadWrite. Alex has been a journalist since the late 1980s, starting...
Read more from Alex Williams
SHARE THIS STORY
RELATED STORIES
Log4Shell Lives! Kubernetes 101: Install Kubernetes on Rocky Linux Devs Are Excited by ActivityPub, Open Protocol for Mastodon Case Study: How SeatGeek Adopted HashiCorp’s Nomad 6 Security Risks to Consider with WebAssembly
SHARE THIS STORY
RELATED STORIES
Oxeye Finds Bad Spotify Backstage JavaScript Vulnerability How Web Tech Got This Way and How It May Evolve in the Future Entrepreneurship for Engineers: Painkiller or Vitamin?  Kubernetes 101: Install Kubernetes on Rocky Linux Pre-Labeled Datasets Are Key to Building High-Quality ML Models
THE NEW STACK UPDATE A newsletter digest of the week’s most important stories & analyses.
The New stack does not sell your information or share it with unaffiliated third parties. By continuing, you agree to our Terms of Use and Privacy Policy.