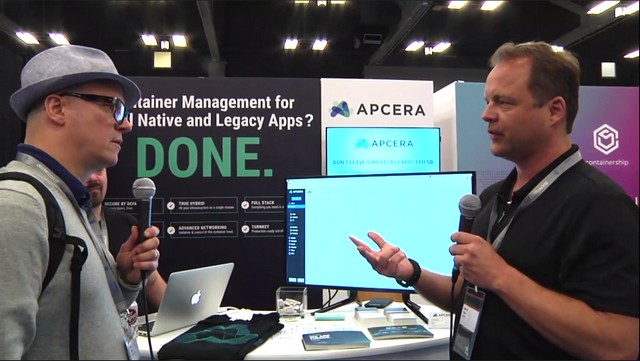 “There are a lot of enterprises out there… and they want to do app modernization, but they’re kinda stuck with their legacy applications,” explained Apcera director of product management Henry Stapp, speaking with Alex Williams at DockerCon 2017 in Austin, Texas. “They want to be able to migrate those to cloud, and then also have a way to support those modern, containerized applications.

It’s no longer something that defies belief. Many applications from the client/server era, or the first generation of SOA, run perfectly well within a virtual machine without “knowing” that’s where it is. IP networking has typically resolved the problem of making the proper connections between these applications and the outside world. But that style of networking was easier. It could pretend that a VM and a physical server were the same class of machine. A container does not have that luxury; it merely represents the running app, and only for a limited period of time.

So although Apcera didn’t have to reinvent the wheel, it did have to repurpose the wheels and gears of application networking to make programs for the old environment sustainable within a hosting platform that’s two or three generations newer. The result is what Stapp explained to us as a single platform across multiple clouds.

1:04: Looking at a quick demo of the Apcera platform.
1:40: The connection to containers and how they apply to customers today.
3:42: Exploring building requirements when modernizing applications with containers.
4:56: Looking ahead in the modernization of legacy platforms.
5:35: Running Apcera at the enterprise level.
6:30: The management requirements of Apcera users.

Alex Williams is founder and editor in chief of The New Stack. He's a longtime technology journalist who did stints at TechCrunch, SiliconAngle and what is now known as ReadWrite. Alex has been a journalist since the late 1980s, starting...
Read more from Alex Williams
Share this story
RELATED STORIES
VMs Out, Containers In: The Telecom Revolution Continues The Case for Environment-Specific Docker Images Deploy a Container Stack in Portainer from a GitHub Repository Acorn from the Eyes of a Docker Compose User Regional Disaster Recovery Is Vital to Your Business Continuity Plan
Share this story
RELATED STORIES
Ubuntu Server Struggles with Post-Docker Kubernetes Installs What Is Apptainer and How Do You Install It on Ubuntu Server? 4 Ways to Optimize Your Workflows with Docker Extensions Can You Live without Kubernetes? Regional Disaster Recovery Is Vital to Your Business Continuity Plan
THE NEW STACK UPDATE A newsletter digest of the week’s most important stories & analyses.
We don't sell or share your email. By continuing, you agree to our Terms of Use and Privacy Policy.