APIdays Gets Political and Heavy in Paris

Political themes and topics were especially prevalent at the recently held APIdays Paris.Some of the keynote themes and talks, for example, touched on the societal implications of artificial intelligence, data security and nationalism, the IT industry’s place in climate change and even computer science’s role in human societal and genetic evolution.
Jan 3rd, 2019 3:00am by B. Cameron Gain 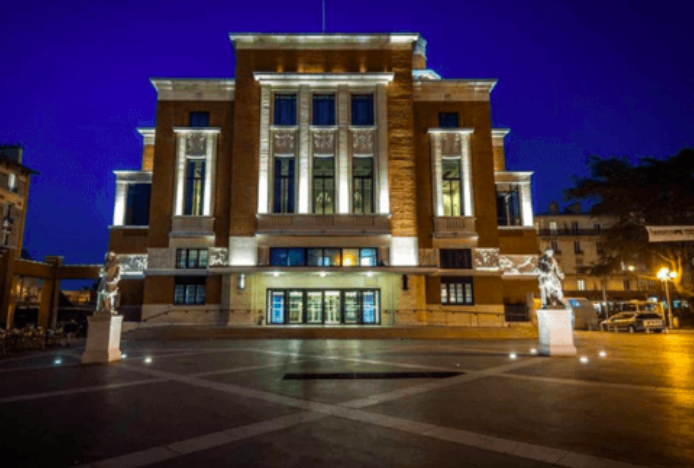 Political themes and topics were especially prevalent at the recently held APIdays Paris.

Some of the keynote themes and talks, for example, touched on the societal implications of artificial intelligence, data security and nationalism, the IT industry’s place in climate change and even computer science’s role in human societal and genetic evolution.

The conference was also held in Paris, which has also become ground zero for some of the worst rioting and major political upheaval in France since World War II. The outlet for the mayhem is the Yellow Vest movement in France, which has led to mass rioting, 10 deaths and a reported 4.4 billion euros in economic losses. It was sparked by a growing sentiment of populism due largely to rising inequalities in wealth that have also coincided with higher lower living costs, less government aid and higher taxes.

In many ways, it was as if France’s political upheaval served as a real-world backdrop for several of the keynotes and sessions at APIdays Paris. 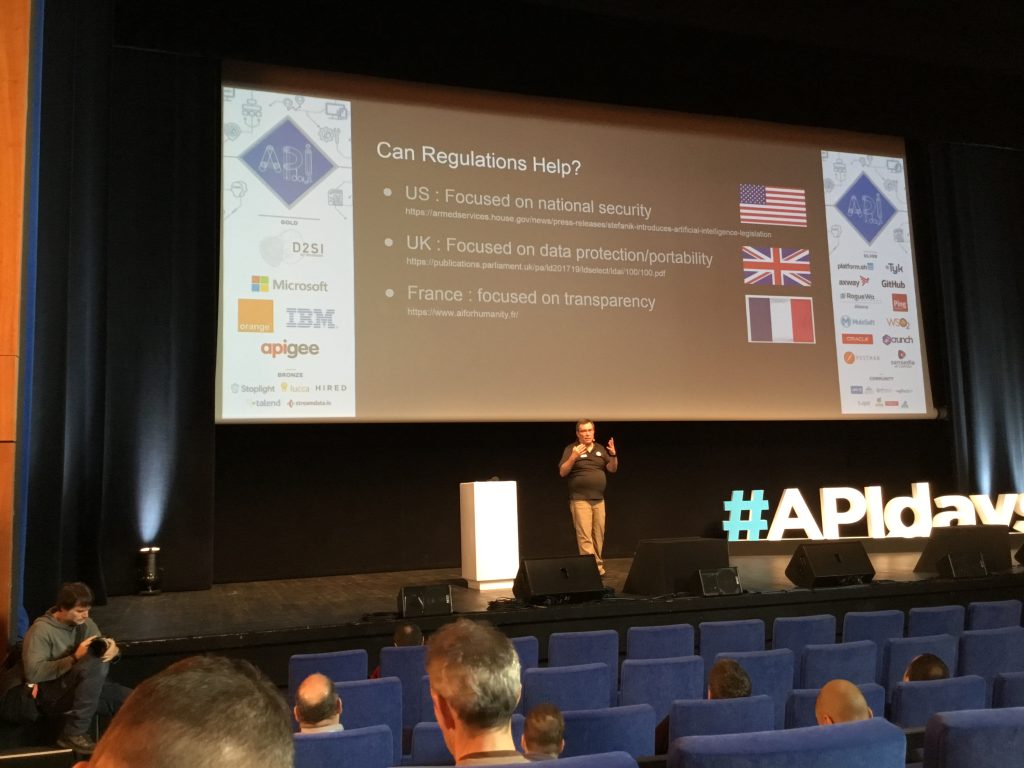 During “Bots on the ‘Net: The Good, the Bad, and the Future,” Mike Amundsen, director of API architecture, API Academy at Broadcom, discussed the history of bots and how their APIs remain mistrusted — even as they should eventually play a very fundamental role in society. The political solutions Amundsen described consisted of regulations for security and privacy that are now making their way into United Nations charters.

Pending regulations include focuses on national security in the U.S., data protection and data portability in the U.K., and in France, “most of the talk about AI, chatbots and security has a lot to do with transparency and knowing  who you are dealing with, and whether or not something is a machine and where the data comes from,” Amundsen said. “At the UN, they are incorporating the importance of national security, portability in protection and transparency as all being written into very important elements of the United Nations’ AI policies,” Amundsen said.

There are specific roles and tasks AI can fulfill that should be able to appease those who are the most distrustful of AI. These tasks include bots for tutoring, tax preparation and travel agents, Amundsen said. “There’s not a lot of context here [for these use cases] you can mess up and there is not a lot of planning and reasoning involved in learning about these elements,” Amundsen said. “There is great opportunity in creating machines that help us.” 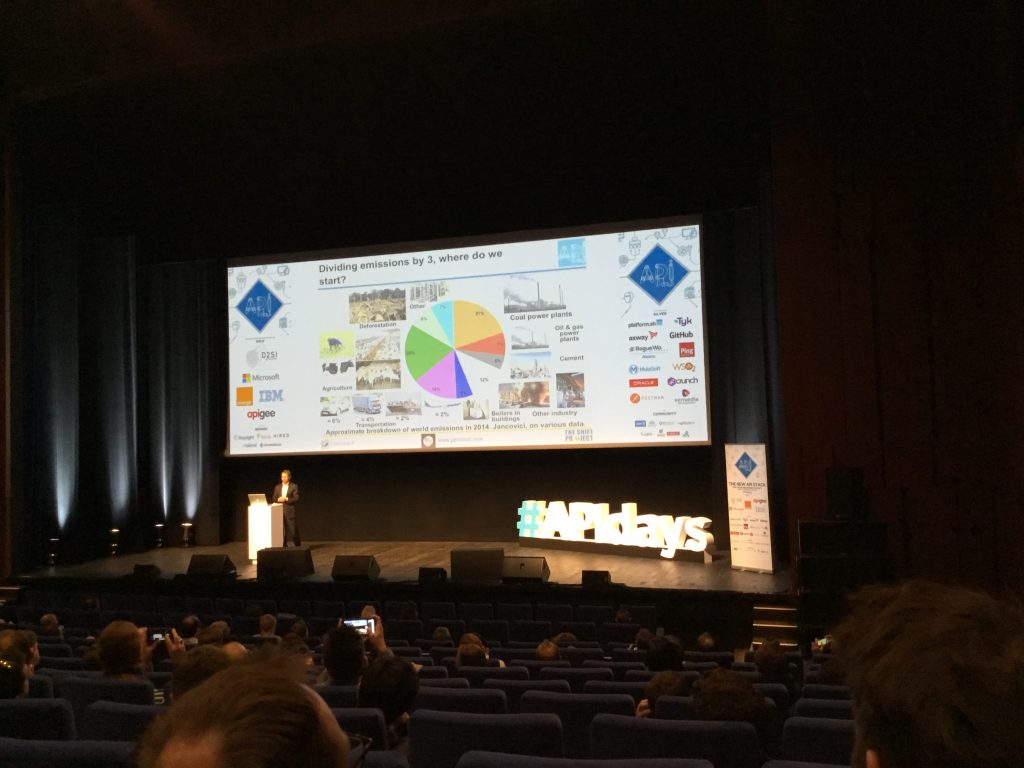 The French yellow vest movement was largely instigated by a tax increase on diesel fuel. The tax was levied to further discourage the use of carbon-based fuel alternatives and drafted in part by the former French Minister for the Ecological and Solidary Transition Nicolas Hulot, who recently resigned in protest because French President Emmanuel Macron’s administration was not moving fast enough to lower carbon-emitting gases and for other reasons.

However, as Hulot (who remains an outspoken advocate for taking actions to mitigate global warming) has indicated, the poor and the middle class will suffer the most from global warming and the resulting political upheaval. Meanwhile, the Yellow Vest participants mainly claim they are unable to live on a working wage and often downplay or even deny that action needs to be taken — at their expense — to prepare for a warming climate.

It was in this context that Jean-Marc Jancovici, president of The Shift Project, described what he said is a very dire prognosis for what awaits coming generations who will pay a very heavy price for our generation’s ineptitude of not lowering carbon gases into the Earth’s atmosphere.

Among other things, he openly criticized the IT industry during his keynote “Our global IT system, energy saver or climate destroyer?” “Green IT” is a misnomer, just as saying “natural gas” is benign for the environment because it is “natural,” Jancovici said.

“An IT system is very much backed up by [fossil fuel] sources,” Jancovici said. “Organic chemistry is providing many things for an IT system.”

The Evils of U.S. Tech Imperialism

Intertwined governmental and corporate interests often influence French media outlets. This helps to explain why U.S. tech giants Apple Google, Amazon, Facebook and even Netflix in the tech sector, as well as other U.S. multinationals, are often vilified in the French media, while French multinationals are, at the very least, criticized less.

During a media event at APIdays Paris under the heading of “How does the media industry use APIs in its transformation?” one could expect to witness rampant politically charged criticism about how U.S. cloud giants Google, Amazon and Microsoft cannot be trusted for data storage and management. But that assumption was wrong — representatives from “Le Figaro,” one of France’s largest newspapers, and France-based AFP, a leading wire service worldwide, who spoke at the sessions did indeed confirm that their data remained on on-premise services. But the reasons were not tied to data security as much as they were to cost considerations.

Pricing was the main consideration “Le Figaro” did not move its IT infrastructure to a cloud environment, Brice Mancone, chief technology officer for Figaro, said.

“We measured how much it would cost us,” Mancone said. “And we also did not want to be tied to one or two  cloud vendors.”

The Evolution of Virtual Genetics 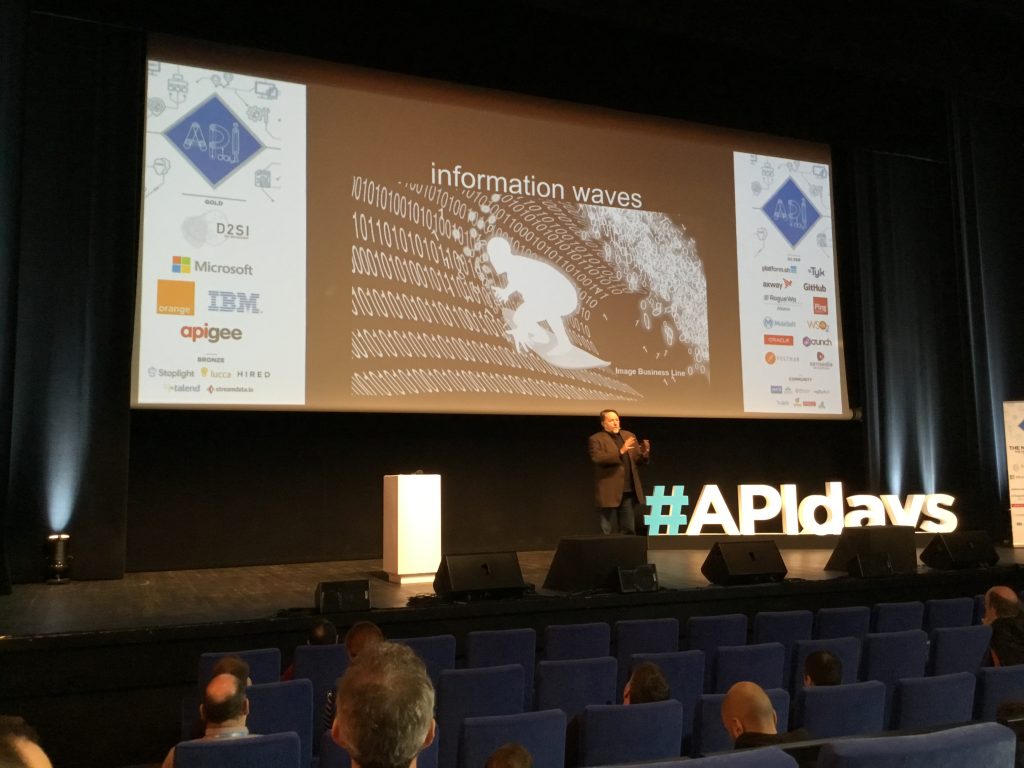 The political implications associated with the profound influences AI and data sciences are having on society are also part of an evolutionary trend in human biology, Reese Jones, currently, associate founder of Singularity University and a Facebook adviser said during the keynote “Blockchains like Biology.” Jones, who has held numerous board-level positions and headed up startups that have had lasting impacts on the tech sector, traced evolutionary biology back to the amoeba stage and described how blockchain fits into the modern-day human ecosystem, in the context of human genetics, AI and virtual reality.

In many ways, we as individuals are “surfing on a wave,” Jones said. “Life experience is surfing on this change of information about ourselves and the ecosystem we are in,” Jones said. “And so, this is a trend that is continuing to affect both electronic versions of biological life  and intelligent versions of electronic life that are starting to evolve.”

The collapse of human civilization and, as some argue, pending extinction of the human race in the not-so-distant future would obviously spell the end of IT industry, thus rendering obsolete any other political or human-related issues (unless AI would find a way to teach itself to survive, which is not impossible). But before that may or may not happen, it will be interesting to see how and if future APIdays and other tech conferences reflect the politics of the day that are very much associated with the tech industry.

On a positive note, APIdays participants will likely be able to continue to benefit from hands-on sessions and workshops for software development and management — and learn more about some of the major issues and political context in which we are also collectively key players.

Maybe some of the discussions and debates at future APIdays could even lead to some real and workable solutions with the use of software development to address some of the more dire issues described above.

BC Gain’s obsession with computers began when he hacked a Space Invaders console to play all day for 25 cents at the local video arcade in the early 1980s. He then started writing code for very elementary games on the...
Read more from B. Cameron Gain
SHARE THIS STORY
RELATED STORIES
Java's James Gosling on Fame, Freedom, Failure Modes and Fun Why 'Explainable AI' Can Benefit Business Golden Paths Start with a Shift Left How to Get Started Filling 3.4 Million Cybersecurity Jobs How Not to Waste a Senior Hire
SHARE THIS STORY
RELATED STORIES
Snack Stack: Turning Winter Comfort Food up to 11 Why Your Code Sucks: Common Excuses for Bad Programming 2022 in Review: AI, IT Armies, and Poems about Food Golden Paths Start with a Shift Left 5 Ways ChatGPT Could Supercharge Chatbots
THE NEW STACK UPDATE A newsletter digest of the week’s most important stories & analyses.
The New stack does not sell your information or share it with unaffiliated third parties. By continuing, you agree to our Terms of Use and Privacy Policy.