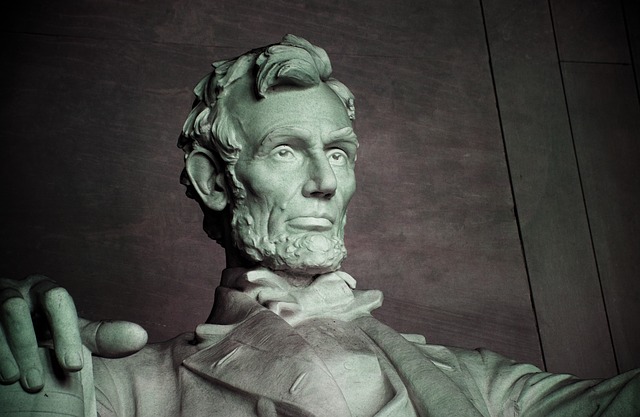 It has been argued, at least in jest, that because the United States president so dramatically affects world politics and economics, the whole world should get to vote for her or him. Well, there is another election taking place this November, and while the rest of the world won’t be able to vote, people in the U.S. and all over should have access to the debates, news and results that come from this very long American presidential cycle.

What’s cool is that how cutting-edge technology is at work to help democratize the sharing of electoral data, sentiment, rhetoric and so much more. Today, The New Stack offers you an overview of the technologies that are connecting electoral information to the people, for the people.

AI Tells Us What Politicians Really Are Saying

“Any time there’s a debate, people will use speech or voice detection to translate the debate into text and then go to town with that and come up with fun entity extractions and fun personality insights,” IBM Watson’s Ashley Hathaway told us. “I think that the election and political topics are always really interesting to see the outcomes. Sometimes it’s really really insightful and sometimes it’s just kind of fun to see what the computer thinks of the different candidates.”

And it’s not just so news commentators can dissect the debate, but it’s about empowering the citizen to become more informed.  Clarify has done preliminary work with IBM Watson to take what is said in the U.S. Presidential debates, figure out what the most important words are and then to use the IBM Watson app to find news articles on a topic.

If Hillary Clinton gets a question on her email server, and you are not sure of the significance of the question. “This will help you discover that,” explained Keith Casey the director of product at Clarify,

Earlier this month, Clarify joined the Microsoft Ventures Accelerator project on machine learning, which aims to advance automated voice recognition to understand not only what is being said but also place it in the proper context and domain. 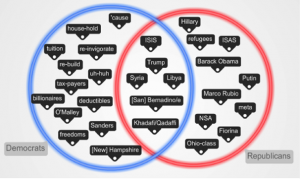 You can also use this information to create some intriguing visual representations of how certain candidates and word patterns relate, like the Venn diagram shown at left, which was first posted on Alchemy API’s blog.

You can plug this voice recognition data into AlchemyData News API, which features more than 400 different facets available to search the news, which can be streamlined with queries and keyword limitations.

Right now, this debate voice recognition is via an open API that anyone can plug into. Technical political advisers may want to try this technology to help make their candidates more believable, accurate, or even likable.

“There have been a couple demos of people getting better at speeches,” Hathaway said. “You just give the speech to the computer so it will highlight specific lines to improve, let you know when you are being overconfident or where you were unclear. This is where AI and machine learning would just let us ask different questions and we can learn more than we would have previously.”

Let’s face it, most government websites don’t even have very good search engines and certainly, despite their great dot-gov domain, are lacking search engine optimization. That means when we want to find information, we do a lot of Googling and often come up with conflicting results.
The Google Civic Information API looks to clear that up, particularly for representation and voting station information, for which it provides nearly 100 percent coverage for states, counties, Congressional districts, and large cities. This information is intended to help people vote and to assist in GOTV [get-out-the-vote] efforts, but as it is an open API [application programming interface], any apps and services can be built on top of it. They do append this API with a lot of notes of how the data can be tricky to work with, with data from so many sources and no semantic rules in place.

Another big process that gets a lot of attention every election cycle is polling—how many times have you heard “Is Trump really doing that well or is the media just wanting more attention?” Well, after his big win in New Hampshire, it seems those polls are closer to the truth. But which polls should you trust? In a Creative Commons open-source project, the Huffington Post Pollster API looks to aggregate thousands of opinion polls into charts.

After the debacle of the 2000 Bush v. Gore election night and days to follow, there’s been an obvious push to take the uncertainty out of exit polls, chad interpretation, and the opinions of political pundits, and to put it into the hands of usually more reliable computers. The Associated Press’ AP Elections API pulls together election race data like vote counts and race calls, allowing those that build apps on top of it to pull data to automatically generate specific reports on specific races.

And it’s not just about the man or woman on top. Let’s not forget one-third of the Senate and the whole House are up for reelection. What better time then to use a tool like the GovTrack API for programmatic access to all things U.S. Congress.

And we’ve only touched on the options for this year’s biggest race, but certainly other countries are much more advanced over the U.S. in terms of elections and voter technology. The Global Open Data Index tracks the electoral open data projects of 78 countries plus Puerto Rico (note: not the U.S.)

“Anything is kind of fair game. It’s all about thinking about what the use case is and finding the API that works for that,” Hathaway said. “It’s interesting to see the speed that AI and machine learning are beginning to operate. It used to take a long time to get a large data set. But with all the deep learning capabilities and advances being made, it’s getting faster and faster in time to value.”

Jennifer Riggins is a culture side of tech storyteller, journalist, writer, and event and podcast host, helping to share the stories where culture and technology collide and to translate the impact of the tech we are building. Currently in London,...
Read more from Jennifer Riggins
SHARE THIS STORY
RELATED STORIES
Best Practices for API Security in Kubernetes What It Means to Be OpenAPI-First in Kubernetes Developers: Twitter Wants Your Bots (and Other Read/Write Apps) The Flywheel Effect of Kubernetes APIs Service Simplifies Natural Language Processing for Developers
SHARE THIS STORY
RELATED STORIES
Composing a Platform by Patching Crossplane Resources The Flywheel Effect of Kubernetes APIs How to Achieve API Governance  Planning User Roles for Your Application GraphQL and REST Can Coexist, Author Will Lyon Says
THE NEW STACK UPDATE A newsletter digest of the week’s most important stories & analyses.
The New stack does not sell your information or share it with unaffiliated third parties. By continuing, you agree to our Terms of Use and Privacy Policy.