Argo Rollouts: How Intuit Does Blue/Green and Canary Deployments on Kubernetes 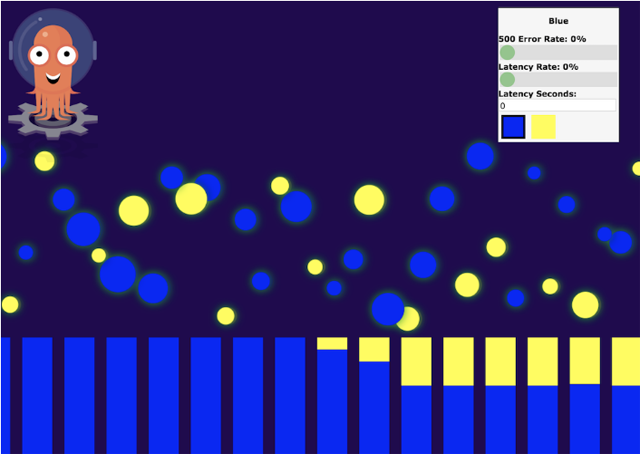 Without native support for blue/green and canary deployments in Kubernetes, developers are left on their own to work that out.

Intuit acquired Applatix, the company behind the Argo workflow engine for Kubernetes, in early 2018, and focused that team’s efforts to moving the financial software firm to cloud-native technology.

Within 18 months, it had 2,000 services running on Kubernetes. It now touts that creating or upgrading a service takes less than 10 minutes, including setting up automated build and deploy pipelines, and a rollback less than five minutes for its QuickBooks software.

Intuit has 1,200 engineers using Kubernetes making around 1,300 deployments a day, Thomson said. They use two deployment strategies: recreate (version A is terminated, then version B is rolled out); and rolling update (Version B is slowly rolled out and replacing Version A). But it found its legacy software couldn’t do rolling update, plus it had new applications and strategies it wanted to employ.

It uses a GitOps approach as a single source of truth of the desired state of infrastructure and applications. All Kubernetes manifests are stored in a Git repository, and it uses the open source tool Argo CD, which compares the manifests to what’s in the cluster, identify the differences, and help the user reconcile those differences.

One of the problems Intuit encountered is that GitOps is declarative and blue/green and canary methods are imperative.

“We wanted more of a declarative approach and integrate with CI tools so developers would have a simple, clean pipeline from commit to deploy and master,” Thomson said.

Its first approach to blue/green and canary deployments involved Jenkins scripting, but that did not fit the GitOps model.

“[It was] taking a lot of state and putting that into our pipeline, which meant we had two different sources of truth. [There were] a lot of assumptions with Jenkins. If anything changed, if there was anything different with the cluster, the pipeline would fail. Users would have to go in and modify the cluster to get it back into the right state,” he said.

It also was extremely brittle and required more work than they wanted.

Next, it tried pushing Jenkins logic into deployment hooks. There were still a lot of assumptions from Jenkins, it still was not idempotent and transparent, and still required a lot of work. It was still not following the GitOps model.

“It worked, but we weren’t happy with it,” Thomson said.

The first two approaches were very imperative.  “We said, ‘Do this, do that.” But we wanted to take advantage of the things that make Kubernetes so great: it’s declarative nature,” he said.

So they set out to build a custom controller, which after six months of work became Argo Rollouts. Its design requirements were that it:

You install a custom resource called a rollout, then a controller that operates on that resource. It handles ReplicaSet creation, scaling and deletion — the full lifecycle of the ReplicaSet. They also wanted to have a single desired state as a Podspec. It supports manual and automated promotions and integrates with Horizontal Pod Autoscaler (HPA).

Since developers vary in their approaches to canary deployment, they wanted to make it as flexible as possible. It allows the user to define the steps they want to take to transition from old version to the new.

Thomson explained in a blog post that the Argo Rollouts controller enables both old and new versions to run simultaneously in blue/green deployments by managing the ReplicaSets and filtering the traffic by modifying Service selectors:

The ReplicaSets are created from the spec.template field of the Rollout and services are specified in the spec.strategy.blueGreen field. Each ReplicaSet created by the rollout has a unique hash (in the rollouts-pod-template-hash in the label) that the controller will add to the service’s selector to limit traffic to that one ReplicaSet.

You can define a ratio of traffic to your canary or you can add a step that will pause your rollout for a predetermined time or it gets the OK to progress. When a new version is introduced, the Argo Rollout controller will execute these steps, then mark the current template within the rollout to be the new stable resource.

It was not using service mesh at the time of this demo, but started working with Istio during the summer. It has since released Admiral, an open source project providing automatic configuration for multiple Istio deployments to work as a single mesh.

Since the acquisition, Intuit has released a number of Argo projects, including:

Susan Hall is the Sponsor Editor for The New Stack. Her job is to help sponsors attain the widest readership possible for their contributed content. She has written for The New Stack since its early days, as well as sites...
Read more from Susan Hall
SHARE THIS STORY
RELATED STORIES
Kubernetes CI/CD Pipelines Explained Coherence Strives to Streamline Cloud Developer Experience Enriching Dev Experience with Speedy Continuous Integration An Inside Look at What GitLab’s Web IDE Offers Developers Kubescape: A CNCF Sandbox Platform for All Kubernetes Security
The Cloud Native Computing Foundation and KubeCon+CloudNativeCon are sponsors of The New Stack.
SHARE THIS STORY
RELATED STORIES
Using DORA Metrics to Optimize CI Pipelines Engineering Best Practices of CI Pipelines CircleCI to Customers: Change All Secrets and API Tokens NOW! Argo CD and Flux Are CNCF Grads: But What Now? GitHub Actions Were Vulnerable to Rust Artifact Poisoning
THE NEW STACK UPDATE A newsletter digest of the week’s most important stories & analyses.
The New stack does not sell your information or share it with unaffiliated third parties. By continuing, you agree to our Terms of Use and Privacy Policy.