Galaxy of Stars: Wil Wheaton Is Newest Member of the Celebrity Asteroid Club 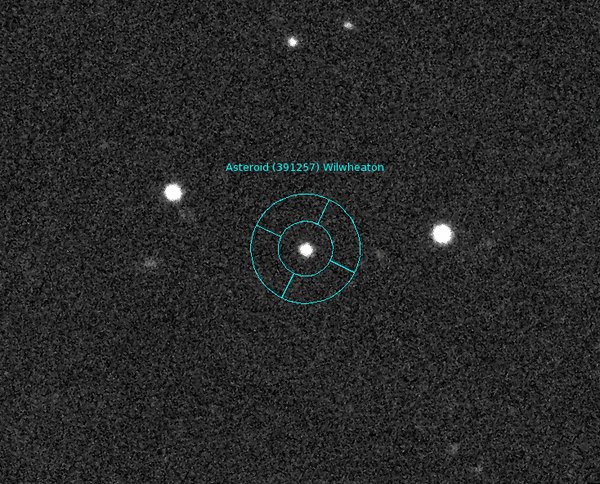 There’s now an asteroid named after Wil Wheaton, the actor who played young Wesley Crusher on “Star Trek: The Next Generation.” Wheaton’s character had accompanied the Starship Enterprise on its continuing mission over the show’s first four seasons from 1987 to 1991 — beginning back when Wheaton was just 15 years old. But twenty years later, he’s now a minor celebrity on the scifi circuit.

As strange as this seems, CNET points out that Wheaton isn’t even the first Star Trek actor commemorated with an asteroid. There’s also asteroids named after George Takei, and Nichelle Nichols from the original 1960s TV series, as well as one named after Gene Roddenbery, who created the series.

And it’s not particularly uncommon to name an asteroid after a celebrity: Sixty asteroids have already been named for popular musicians, including asteroids named after Frank Sinatra, the BeeGees, and even the British heavy metal group Motörhead.

There’s asteroids named after all four Beatles, and the cosmos are even honoring the early days of rock and roll, with a minor planet named after the lead singer on “Rock around the Clock” — Bill Haley and the Comets. Freddie Mercury was honored with an asteroid on his 70th birthday, and two years ago an asteroid was dedicated to David Bowie.

There’s even six asteroids named after each member of the Monty Python comedy troupe.

But this month it was Wheaton’s turn to receive the rare honor of a namesake in the stars — and he seems as surprised as anybody. The news first began spreading on the personal Twitter feed of Ron Baalke (who describes himself as a space explorer at NASA’s Jet Propulsion Laboratory). Ironically, there’s also already an asteroid named after him — Asteroid 6524 Baalke — so it’s nice that he was the one sharing the news about Wheaton’s own induction into the heavens:

“The folks over at NASA also have a soft spot for Wheaton,” joked Hot Hardware.com — and it must’ve been an awe-inspiring honor to be able to look up your own name in the online database of celestial bodies at NASA’s Jet Propulsion Laboratory. 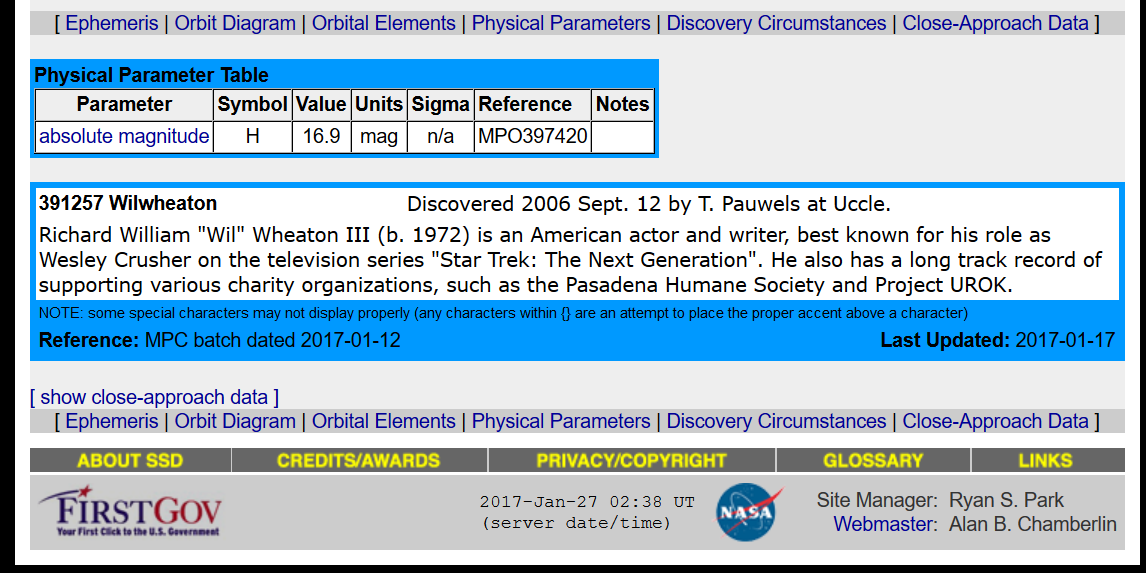 Wheaton wrote a very gracious response on his blog, in a post remembering the day he first fell in love with outer space. He remembered an autumn day in 1975 when he was a three-year-old boy staring up at the moon while standing between his parents — each one holding a hand — in the farmlands of southern California.

In the same backyard where he’d later play in a teepee built from blankets and broomsticks, they’d stared up together at an enormous moon that his father assured him was far away, in space. Wheaton writes that ever since that day he’s thought of the moon not as a thing, but as a place you could go to.

“From that moment, I wanted to learn everything I could about space. I would read ‘Let’s Go To The Moon‘ with my grandmother as often as she would allow it. I would make rockets out of everything I could get my hands on, and imagine riding them into space.” And when he worked on the set of ‘Star Trek: The Next Generation,'” it even felt amazing to be looking out at the show’s fake starfields, just because “I got to pretend that I, too, lived in space.”

And he’s never lost the feeling. “I grew up. A lot of things changed in my life, but I never stopped loving space. I never stopped looking up into the dark sky and imagining that, someday, maybe I’d go there and come back.”

And when they named an asteroid after him, it sort of came true.

“Today, I found out that I kind of get to be in space and live right here on Earth… As soon as it gets dark here, I’m going to walk out into my backyard, look up into the sky, just a little above Sirius, and know that, even though I can’t see it with my naked eye, it’s out there, and it’s named after me.”

I heard @wilw had an asteroid named for him this week, and I found some archival SDSS images of it. Here's asteroid (391257) Wilwheaton! pic.twitter.com/yXCeTykT9p

SHARE THIS STORY
RELATED STORIES
WebTV in 2022? Vintage Tech Enthusiast Shows How on YouTube How and Why to Respond to Incidents the Right Way The Process Equation (Cadence Is Everything, Part 2) What’s the Future of Feature Management? Fear and Layoffs: How to Cope with Tech’s Uncertain Times
SHARE THIS STORY
RELATED STORIES
Entrepreneurship for Engineers: Painkiller or Vitamin?  New Book Identifies 26 Lines of Code that Changed the World WebTV in 2022? Vintage Tech Enthusiast Shows How on YouTube AWS Brings AI/ML Training to Community, Historically Black Colleges Low-Code Tools Improve Devs' Work-Life Balance, Survey Finds
THE NEW STACK UPDATE A newsletter digest of the week’s most important stories & analyses.
The New stack does not sell your information or share it with unaffiliated third parties. By continuing, you agree to our Terms of Use and Privacy Policy.