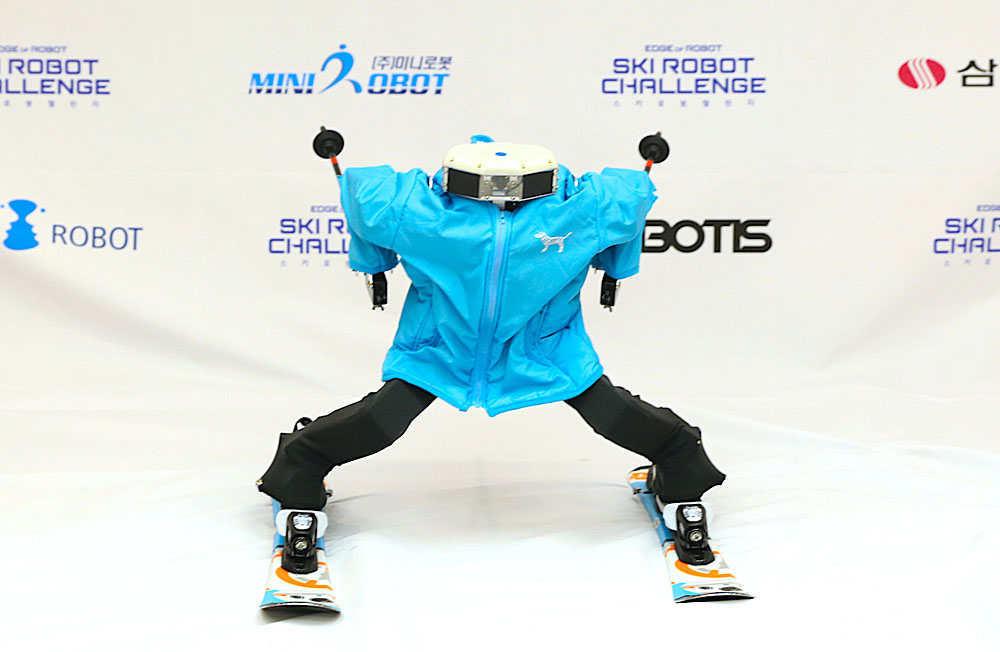 The hype and excitement of this year’s Winter Olympics is finally winding down. But human athletes weren’t the only ones this year striving to realize the Olympian motto of “Faster, Higher, Stronger.” While world-class competitors were strutting their stuff in Pyeongchang, South Korea, just an hour’s drive away in Hoengseong, robots were also showcasing their prowess in a skiing competition that had these paragons of steel autonomously zipping (and tumbling) down the slopes. Watch how they fared:

This was the world’s first Ski Robot Challenge, which gathered eight teams from academia, research institutes and private companies together to compete for a prize worth USD $10,000. It’s not the world’s first international Robot Olympics (that distinction goes an event hosted by the Turing Institute in Scotland back in 1990), and it’s not even the first time robots are skiing — but it’s certainly the first gathering of its size that focused exclusively on skiing, with the complementary aim of promoting South Korea’s robotics industry.

The goal for the competition was simple: whichever robot could ski down the slope the fastest, while avoiding the flagged obstacles, was declared the winner. In addition, each robot had to be of a humanoid shape, with arms, legs, knee and elbow joints; each had to be at least 50 centimeters (19.6 inches) tall from foot to shoulder, and each bot had to utilize both skis and poles, with poles touching the ground when standing. Each team had 3 minutes to complete the length of the course, which measured about 80 meters (87.4 yards) long, by zigzagging through a series of red and blue gates. For each gate that’s cleared, one point is awarded to the robot. 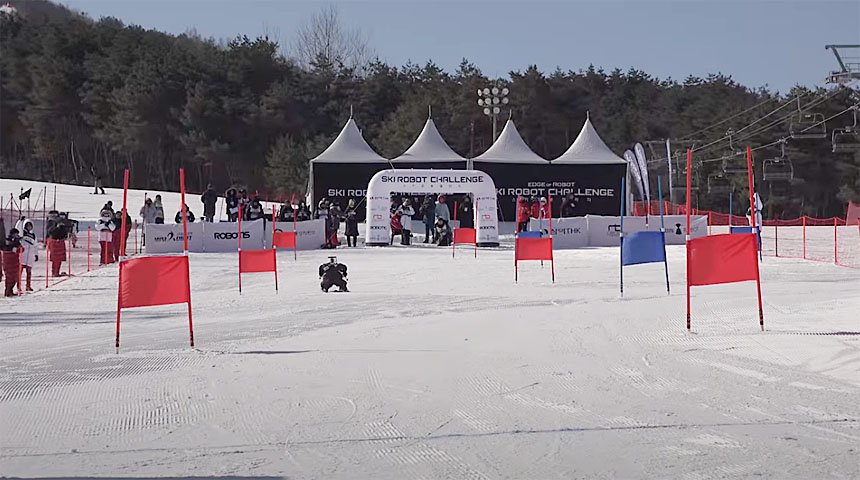 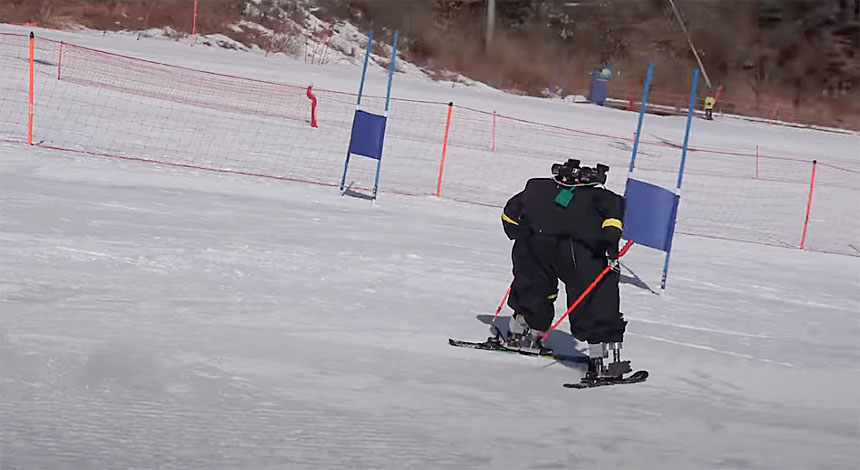 But as we can see from the repeated wipeouts, that seemingly simple task was actually quite a difficult challenge for all these bots, as each one had to make it down the slope autonomously, using whatever sensors or technology their teams equipped them with. The task of skiing downhill is a complex one for robots, as they have to contend with uneven surfaces, while dynamically evaluating and adjusting for variable forces like acceleration and blinding glare from the snow that might confound their computer vision systems.

To cope with these challenges, each robot was designed with slight differences, despite their humanoid form. For instance, the Korea Institute of Robot and Convergence’s lightweight Skiro used stereo computer vision and LIDAR lasers to scan and recognize gates on the slope, in addition to using mapping technologies to position itself and control its velocity in relation to obstacles. Skiro is also equipped with a robust vibration control algorithm, which allows it to ski in a stable manner.

On the other hand, Hanyang University’s Diana — named after a legendary disabled female ski racer, Diana Golden — was a crowdfunded robot outfitted with deep learning AI, which allowed it to achieve what its creators call the “perfect ski position,” and was trained by a former national ski champion. 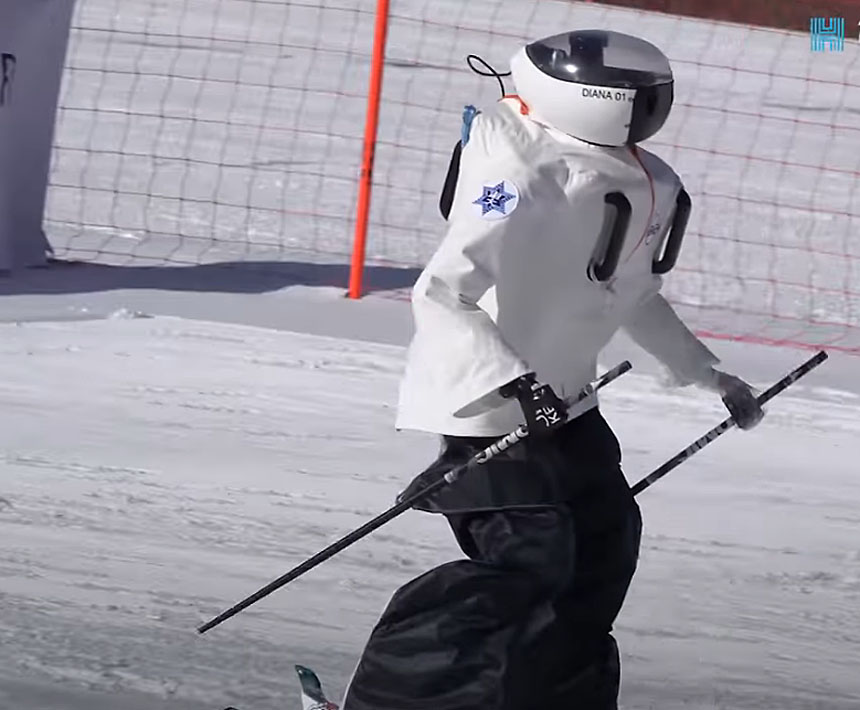 As it was, the winning robot was the underdog of the bunch: Minirobot Corp‘s Taekwon V, which at 75 centimeters (29.5 inches) tall and 12 kilograms (26.4 pounds) in weight, managed to make it down the slope in 18 seconds.

According to the Minirobot team, Taekwon V has participated in a number of previous robotics competitions and was readapted as a skiing version of itself for this event. Despite its short stature and rigid structure, its 21 joints permit for human-like movement, and it’s designed as a low-cost and highly efficient machine.

But this ski competition wasn’t the only place where robots were seen in plain view; the 2018 Olympics in Pyeongchang seemed like a testing ground for dozens of South Korea’s finest robots, some of which acted as security guards, or performed tasks like cleaning carpets, translating, giving directions and delivering packages.

But it’s likely these menial tasks aren’t the most exciting things that robots are capable of.

“I think in the future robots will have their own Winter Games on the sidelines of the Olympics held by humans,” predicts Kim Dong-uk, one of the organizers behind Ski Robot Challenge.

SHARE THIS STORY
RELATED STORIES
Building an Internal Developer Platform Isn't Just about Tools Case Study: How Dell Technologies Is Building a DevRel Team How Security Champions Can Change Your Culture Low-Code Tools Improve Devs' Work-Life Balance, Survey Finds The Graph of Life in a Post-Relational World
SHARE THIS STORY
RELATED STORIES
Hacks to Help Open Source Leadership Support Inclusion Slack: How Smart Companies Make the Most of Their Internships Entrepreneurship for Engineers: Painkiller or Vitamin?  Collaborating with Internal Dev Experience and Tool Teams The Graph of Life in a Post-Relational World
THE NEW STACK UPDATE A newsletter digest of the week’s most important stories & analyses.
The New stack does not sell your information or share it with unaffiliated third parties. By continuing, you agree to our Terms of Use and Privacy Policy.