AWS Now Lets You Reserve Compute Instances on a Schedule 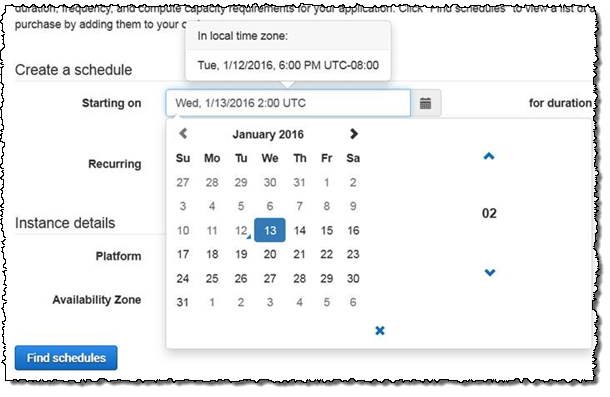 Amazon Web Services now offers the ability to pre-purchase “scheduled” compute instances that repeat at regular intervals, which can be reserved in advance for up to an entire year. Scheduled VM instances will be generally slightly less costly than equivalent on-demand instances.

“Many AWS customers run some of their mission-critical applications on a periodic (daily, weekly, or monthly), part-time basis,” wrote Jeff Barr, the chief evangelist for AWS, in  a post on Amazon’s official AWS blog. “Our new Scheduled Reserved Instances are a great fit for use cases of this type (and many more).”

This feature became available yesterday in the U.S. East (Northern Virginia) and US West (Oregon) regions, as well as Europe (Ireland).

On the blog post, Barr shared screenshots from the reservation wizard. One shows a new “Scheduled Instances” choice on the EC2 Console, which leads to a screen for specifying a start time and a schedule, as well as a platform (e.g. Linux/Unix) and instance type. Scheduled instances are available for the C3, C4, M4, and R3 families of virtual machines.

A “Find schedules” button shows every available resource matching the user’s criteria, along with the price per hour and the yearly total, plus the number of instances available. Barr’s blog post notes that the pricing for scheduled instances is “generally” 5 to 10 percent lower than the cost of their on-demand equivalent. 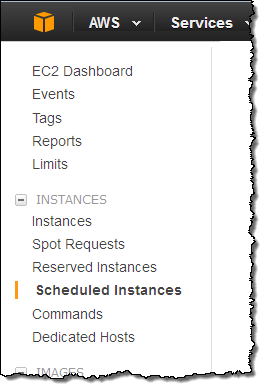 Amazon’s already been offering the ability to reserve an instance, but this new capability allows users to automate that on a regular schedule.

The console now has a “Launch Scheduled Instances” button, but the instances can also be launched from the AWS Command Line Interface, the AWS Tools for Windows PowerShell, or the new RunScheduled Instance function.

AWS is not alone in offering new cloud features this week. On Wednesday, Microsoft announced that it is bringing its Desired State Configuration (DSC) to Azure. A new-ish feature of Windows’ PowerShell, DSC provides a way for administrators to declarative manage configurations across multiple machines.

With Azure Automation DSC, users can author configurations and place them on a “pull server so that target nodes (such as physical and virtual machines) in the cloud or on-premises can pick them up, automatically conform to the desired state they specify, and report back on their compliance with the desired state to Azure Automation,” according to the Microsoft documentation.