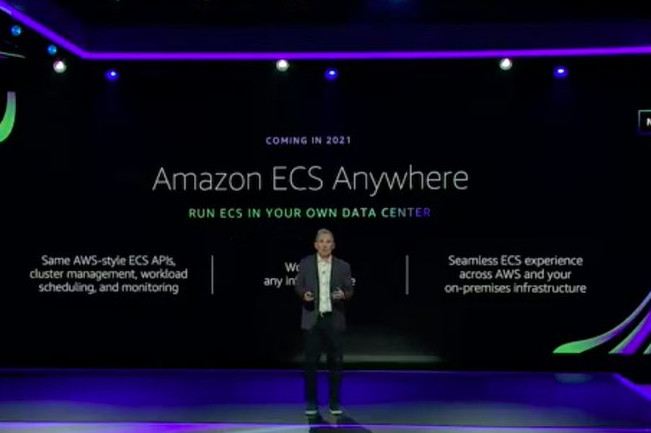 Amazon Web Services has launched a new shared service platform, called Proton, designed to integrate containers, AWS Lambda serverless jobs and other cloud resources into one catalog, making it easier for developers to assemble a standardized stack of components to run their applications.

Proton was one of a number of new cloud native services and enhancements the company debuted in its user conference, AWS re:Event, being held virtually through this month.

To date, integrating multiple microservices together into a cohesive application has been a difficult task, given that different components may be maintained by different development teams.

“There’s no single solution that allows you to provide consistency in the architecture deployments. Normally a platform engineering team or central engineering team wants that to be standardized. But there’s no good way to do that today,” said Aaron Kao, AWS’s head of modern applications product marketing, during an interview with The New Stack.

AWS Proton was designed to simplify the process of provisioning, deploying, and monitoring applications built from ephemeral computing elements, such as components built-in containers or run as serverless jobs.

With Proton, platform engineers can define and publish a stack in a schema file, such as for a containerized web app, or a serverless data processing service. For a web app, for instance, they may want to use an Elastic Container Service (ECS) cluster, a Virtual Private Cloud (VPC) and associated security groups, as well as AWS Fargate, load balancers for the front end, and DynamoDB for the backend data. A monitoring system will be needed, along with a CI/CD system for the build process. The platform team will define, in a standardized way, how all these components fit together, and are secured.

Proton is not a “control plane” or runtime, according to Kao, but it can set the stage for easily building one out. But when the developer chooses a stack, Proton will push it through the build process and deploy it to a previously-defined set of cloud resources. Developers can reuse stacks for different jobs — the platform team ensures all the components stay up-to-date and patched. And AWS itself also offers a number of pre-built stacks that represent the cloud giant’s best practices around security, architecture, and tools.

Other cloud native news from the virtual conference include:

JPMorgan Chase CTO Lori Beer: “Leveraging AWS, and modern engineering practices…” we are relying on “more advanced AI and analytics than we ever have before.” #awsreinvent #aws @thenewstack pic.twitter.com/AX1ZVSoxZR