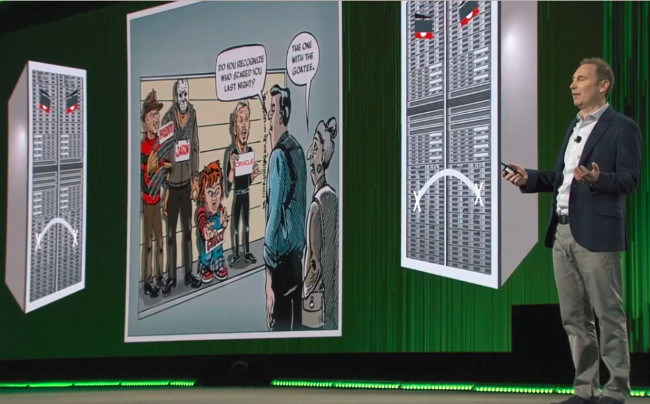 The company also introduced a new managed container service, a new graph database and a “serverless database,” based on the company’s Aurora (MySQL) database architecture. The services and upgrades were introduced by Andy Jassy, AWS CEO, during the company’s annual Re:Invent user conference, held in Las Vegas this week.

Amazon Elastic Container Service for Kubernetes (EKS): This service will run an upstream version of Kubernetes, with the intent of allowing users to use all the Kubernetes plug-ins and support tools, as well as allowing users to easily move containerized workloads between AWS, other cloud providers and their own data centers.

The company has also added some resiliency support, with the help of Heptio. The company will run Kubernetes across three availability zones, to eliminate single points of failure. Unhealthy masters are automatically detected and replaced. This version of K8s is also integrated with other AWS services such as Elastic Load Balancing, IAM (for authentication), AWS CloudTrail and, for networking, Amazon VPC and AWS PrivateLink. 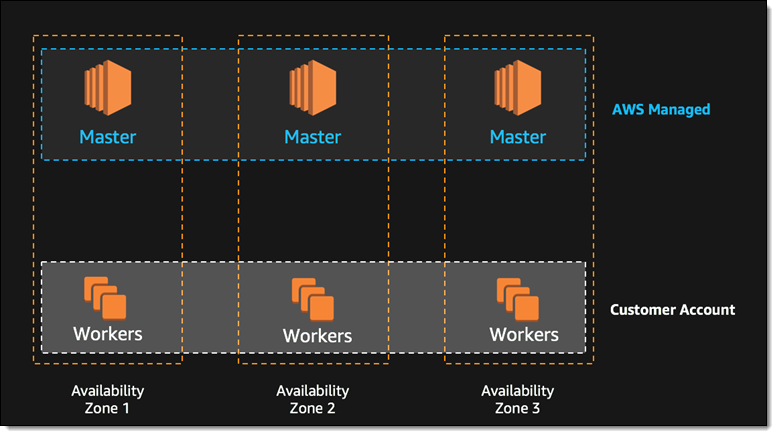 The three masters of AWS EKS.

AWS Fargate: While industry observers were expecting some sort of Kubernetes support, the freshly unveiled AWS Fargate service was a bit of a surprise, and perhaps an even more important debut, from the perspective of the enterprise. This service provides a way, according to Jassy, to run containers, through either EKS or AWS’ own in-house Elastic Container Service, without managing the underlying servers or clusters.

Fargate offers containers in much the same way that AWS Elastic Cloud Compute offers virtual machines, “as a fundamental compute primitive without having to manage the underlying instances,” according to an AWS blog. To build a container image, the user simply specifies the CPU and memory requirements and the networking and authentication policies. Billing will be done on a per-second granularity.

Aurora Serverless: Aurora now has multi-master, scale-out capability for both reads and writes, meaning a single database can have multiple masters across multiple availability zones. Previously, Aurora only offered multiple masters for reading, so the addition of writing is a step up in offering a truly distributed multi-zone database. A recovery from failure can take as little as 100 milliseconds, making any failures transparent to the user.

“It allows your applications to transparently tolerate failure in any master, even in an entire availability zone,” Jassy said. Single-region, multi-master is available today; multi-region multi-master will be available in early 2018.

AWS has also expanded Aurora in another way: allowing customers to pay for only what they use. This variant, Aurora Serverless, is available in preview.

DynamoDB Updates: AWS’ flagship NoSQL database service, DynamoDB, has been updated to a fully multi-region global database, one that can offer the same latency no matter which availability zone the user is tapping into.

It now features global tables —  the ability to create tables that get automatically replicated across two or more AWS regions — complete with multi-master writes. This should eliminate all the database admin drudgery of maintaining a replication process.

DynamoDB now also provides the ability to create full backups of tables through a single click, with zero impact on performance. It will also feature, in early 2018, point-in-time restore, down to the exact specified second.

Amazon Neptune is AWS’ entry into the growing graph database market. It is a service that can store billions of relationships, with the ability to query the relationships within milliseconds. It supports the major standard-based stacks for graph querying: the Apache TinkerPop-based property graphs queried with Gremlin, and the Resource Description Framework (RDF) queried with SPARQL.

Also, on the data front, AWS revealed Glacier Select, to supports querying of objects within its archival storage service, Glacier, the first of the major cloud provider to offer this capability, Jassy boasted.

The company also announced a Service Broker for bridging in-house and cloud resources, as well as updates to its spot instance pricing and a number of new machine learning services, which will be discussed in an upcoming post.

Joab Jackson is Editor-in-Chief for The New Stack, assuring that the TNS website gets a fresh batch of cloud native news, tutorials and perspectives each day. He has logged over 25 years in infrastructure IT journalism, including stints at IDG,...
Read more from Joab Jackson
SHARE THIS STORY
RELATED STORIES
Why Cloud Data Egress Is Expensive Pulumi Introduces One-Click Deployments Top 4 Misconceptions about Cloud Migration Simplify Multicloud Security in 5 Steps Developers Get a Quick-Start to Coding with Replit IDE
SHARE THIS STORY
RELATED STORIES
The Internet Is Not Reliable, but Planning for It Can Save You Why Cloud Lock-In Is Getting Worse Simplify Multicloud Security in 5 Steps Confidential Compute on Azure with Kubernetes A Tactical Field Guide to Optimizing APM Bills
THE NEW STACK UPDATE A newsletter digest of the week’s most important stories & analyses.
The New stack does not sell your information or share it with unaffiliated third parties. By continuing, you agree to our Terms of Use and Privacy Policy.