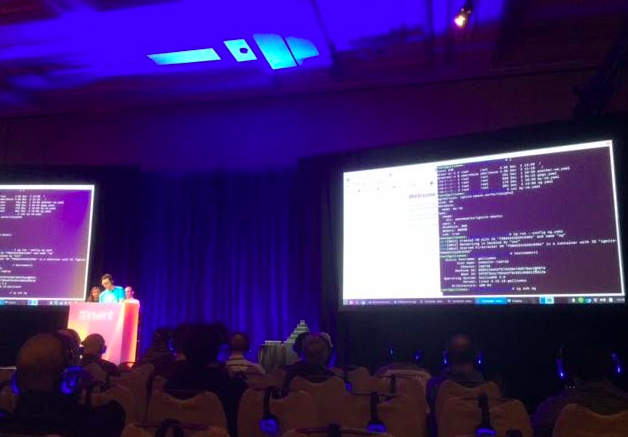 AWS is seeking in the immediate future — with the help of the open source contributors, of course — to make the process of accessing snapshot of microVMs much faster on an as-needed basis. The original idea has been to offer a virtualized environment to isolate containers based on the Linux Kernel Virtual Machine (KVM). What the developers hope to do now is to  allow for access to, for example, a Kubernetes cluster within a microVM to “bring it up to a point with your snapshot where everything is working and when you really need it, really, really fast,” Radu Weiss, an AWS software development manager for Firecracker, told The New Stack after the breakout session and demo.

If during the container snapshot-taking process with Firecracker, you are unable to complete the process, Firecracker should soon be able to allow a service provider, for example, to resume taking snapshots at the point when the interruption occurred.

For the highlights of 2019, Weiss described how Firecracker has begun to offer support for ARM and AMD CPUs, and for Raspberry Pi devices. The roadmap outlines what Weiss said is a “focus on defense in depth, such as continuous fuzz testing and dependency reduction,” in the context of serverless compute platforms.

During the demo, Alexandra Iordache, AWS software development engineer showed how to slash FireCracker’s VM snapshot resume times to as little as 2ms. The goal, Iordache said, was to “take a snapshot of your VMs whenever you want,” then “start it up in 5ms whenever you need it.” The demo consisted of snapshots of 4,000 microVMs, each of which was running a small network workload.

While the process is already measured in milliseconds, the time savings will obviously add up for large-scale loading requirements when working with numerous snapshots. AWS previous said these improvements should be completed this year, AWS representatives would not comment on the timeline or whether the timeline had changed.

As mentioned above, AWS did not deviate from the subject of the Firecracker presentation to discuss how the project fits into AWS’ ambitions to play a larger role in the open source community. However, AWS continues to widen its offering for all things serverless, taking into account its proprietary, as well as, open source-related services.

[W]e anticipate that there will soon be a whole generation of developers who have never touched a server and only write business logic. The reason is simple. Whether you’re building net new applications or migrating legacy, using serverless primitives for compute, data and integration enables you to benefit from the most agility that the cloud has to offer.

BC Gain’s obsession with computers began when he hacked a Space Invaders console to play all day for 25 cents at the local video arcade in the early 1980s. He then started writing code for very elementary games on the...
Read more from B. Cameron Gain
SHARE THIS STORY
RELATED STORIES
Configure SQL Server Standard Edition for High Availability on AWS Microsoft Bolsters Cloud Security with DevOps, CSPM Coverage Developers Get a Quick-Start to Coding with Replit IDE Top 4 Misconceptions about Cloud Migration A Tactical Field Guide to Optimizing APM Bills
SHARE THIS STORY
RELATED STORIES
Why Cloud Data Egress Is Expensive The Internet Is Not Reliable, but Planning for It Can Save You 3 Ways Database as a Service Can Speed Applications Pulumi Introduces One-Click Deployments A Tactical Field Guide to Optimizing APM Bills
THE NEW STACK UPDATE A newsletter digest of the week’s most important stories & analyses.
The New stack does not sell your information or share it with unaffiliated third parties. By continuing, you agree to our Terms of Use and Privacy Policy.