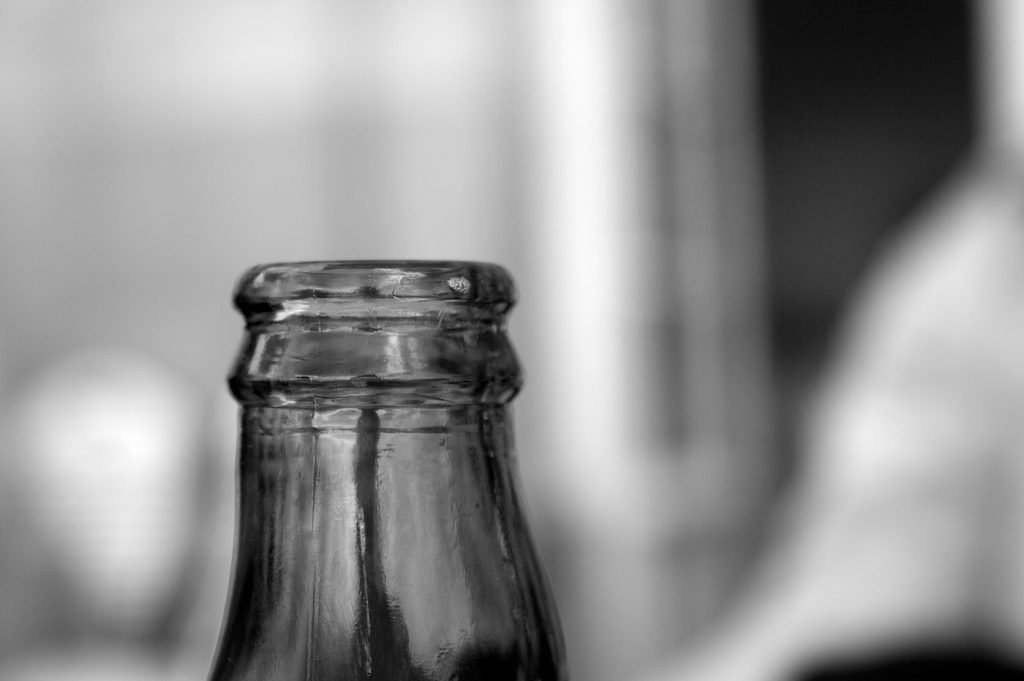 Feature image: “Siggi’s Bottleneck” by Jannis Andrija Schnitzer is licensed under CC BY-SA 2.0.
The New Stack accepts posts about open source projects. Richard Li is the CEO and founder of Datawire.io. Baker Street is the company’s open source project that has an architecture similar to what is in widespread use at companies such as Yelp, Airbnb, Stripe and Netflix.

In a typical microservice architecture, multiple instances of each microservice are deployed for availability and scalability. This limits the impact of the failure of a single microservice instance and maintains overall system reliability. Successfully adopting this architecture requires a load balancing mechanism to ensure that incoming requests are spread across all of the available instances, rather than overloading some instances at the same time other instances are under-utilized.

Using a single central load balancer for an entire application ecosystem essentially duplicates the standard monolith architecture, but increases the number of instances to be served by one load balancer enormously. In addition to being a single point of failure for the entire system should it go down, this single load balancer can very quickly become a major bottleneck, since all traffic to every microservice has to pass through it, as illustrated in the diagram below showing just a handful of active microservices: 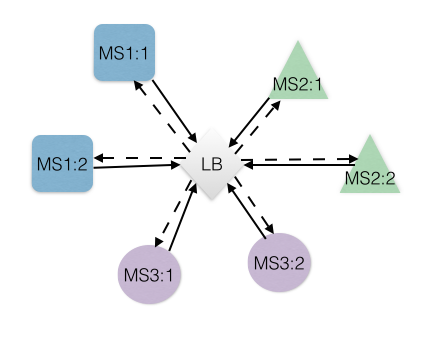 Using a separate central load balancer per microservice type may seem like a logical extension of the standard monolith behavior. In this model, incoming traffic for each type of microservice is sent to a different load balancer, which then routes each request to the next instance in its rotation as follows: 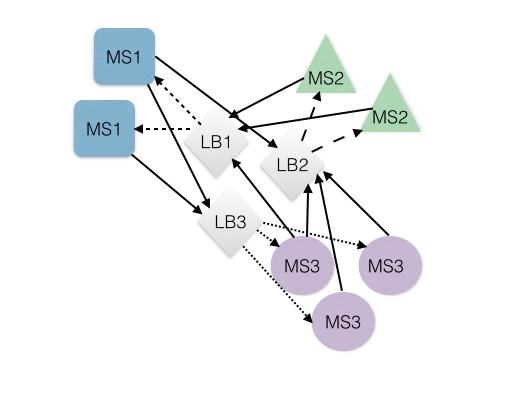 However, closer inspection suggests some tradeoffs with this approach. First of all, adding (or removing) new microservices or additional instances of existing microservices to the system comes with a lot of overhead. Each new component needs to be registered and de-registered as it is added or removed. Further, each new type of microservice needs its own central load balancer, so over time a microservices environment would carry the burden of dozens of load balancers that each need to be managed and maintained.

In addition, while using a central load balancer per microservice type may not add a single point of failure for the entire application, it does add a single point of failure for each microservice type. If the load balancer or the machine it’s running on fails in some way, the entire microservice becomes unavailable which may, in fact, render the entire system unusable if the service is essential to the operation of the system as a whole. This can be handled to some extent by using several central load balancers in concert with each other, but this adds additional complexity around coordination and doubles (or more) the total number of load balancers that must be maintained for the system.

Another issue with central load balancers is scalability. As mentioned above, an environment using microservices might have dozens of components working in concert, each with multiple instances. The number of network connections needed to manage the communication between components grows exponentially. While it is unlikely a central load balancer handling traffic for just one microservice will become a real bottleneck, it certainly could add churn or consume increasingly large amounts of resources as the number of available instances of its microservice increases. 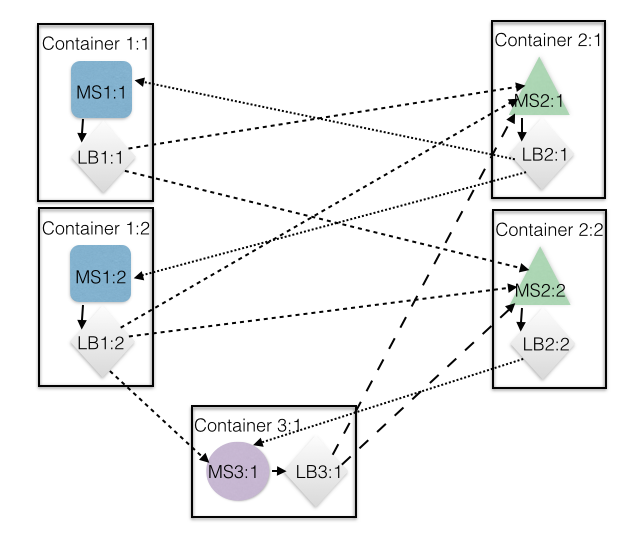 Using a series of client-side load balancers working in concert with each other provides several benefits to a microservice environment: it simplifies service management, it automatically scales the system in accordance with the number of available instances, and it eliminates all single points of failure.

In order to function as a local load balancer, Baker Street needs to track the availability and location of all instances of the microservices within the larger system. This is done using three components: 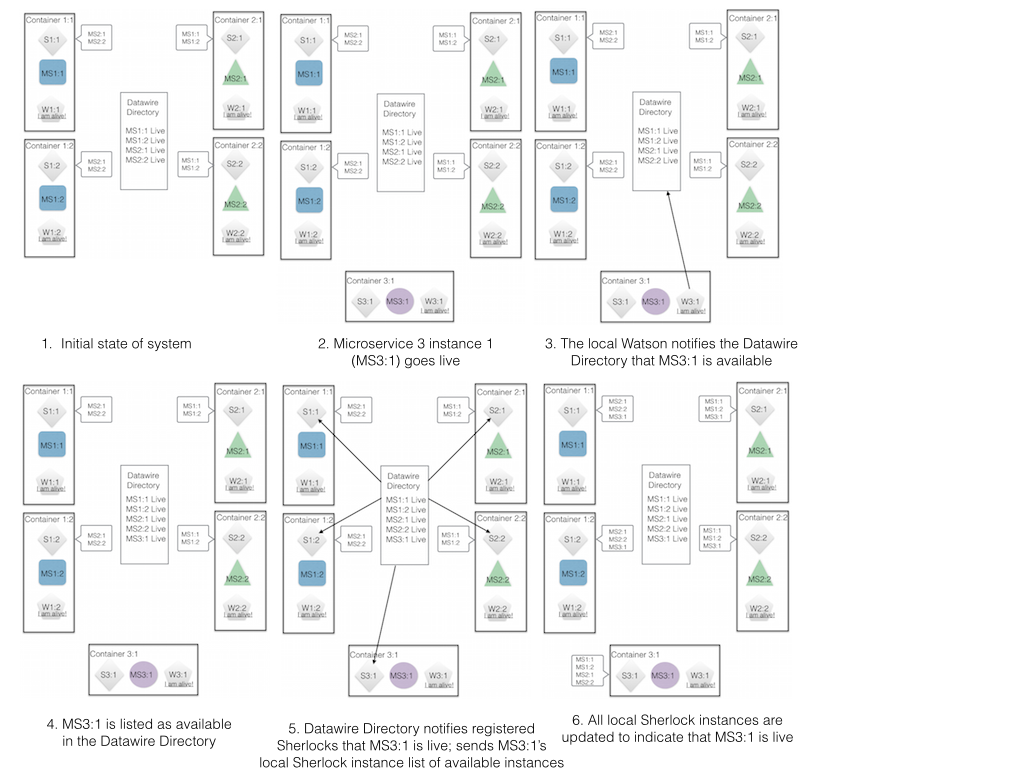 Similarly, when an instance goes down, Watson either tells the Datawire Directory that the instance is now unavailable or, if the whole container is down, the Datawire Directory notices the loss of its connection to the Watson instance and marks the relevant microservice instance as unavailable. Messages are then sent to the registered Sherlock instances to tell them to stop sending traffic to that instance of the microservice. 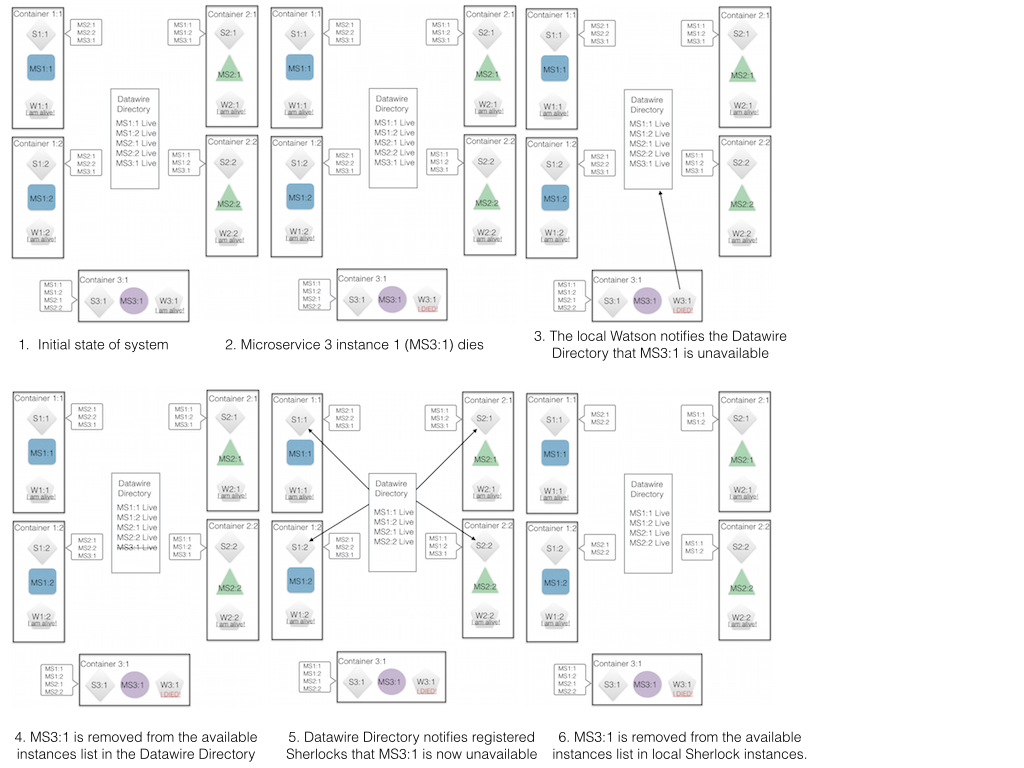 A microservice that wants to connect to another microservice first connects locally to Sherlock. Sherlock proxies the connection from the local microservice to an available microservice to handle the request. It knows where to send the requests because it keeps an up-to-date listing of available instances, managed via messages from the central Datawire Directory service which contains two things:

This publish/subscribe architecture minimizes messages related to health and routing, while ensuring rapid updates whenever there is a change in system health. The system is also self-managing: each Sherlock and Watson automatically register with the central directory service. Finally, additional load balancing capacity is added with every new microservice instance.

In addition, because each local Sherlock instance maintains its own list of available servers, the system remains operational even if the Datawire Directory component goes down; the only issue in this case is that updates about the health of instances are not received or acted upon. This means there is a slightly increased chance of sending traffic to a defunct instance that cannot handle it.

Baker Street eliminates all other single points of global failure as well. If a local microservice instance goes down but its container remains active, then its corresponding Watson instance will inform the central directory to remove it from rotation, and all of the load balancers will be notified to remove that instance from their list of available nodes. If an entire client environment goes down, the Watson discovery service may not have a chance to notify the Datawire Directory directly, but the messaging link between the two will also go down and the directory service will notify the interested Sherlock systems that the instance is down. Basically, no matter the circumstances, even though a few connections may be lost, the system as a whole should remain functional because the majority of instances still work and still have access to their local load balancer containing information that is still mostly up to date.

One possible argument against using client-side load balancing is the effectiveness of actually balancing usage of a service across the entire global network of instances. Each load balancer will distribute connections more-or-less evenly across the whole system and over time the global traffic should be evenly distributed, but in theory nothing prevents each local load balancer from randomly deciding to send its next connection to the same instance as all of the other load balancers in the system and overloading that instance. The odds of this happening are low, especially in large distributed systems, and in practice this does not seem to happen. If you are particularly concerned about this possibility, it is easy to combat by designing the service discovery used by the local load balancers so that the load balancers give a slight bias to nearby instances.

The approach used by Baker Street has been used in numerous cloud deployments, including Airbnb’s SmartStack and Yelp. Baker Street builds on these architectures, but with an emphasis on simplicity and usability by employing a streamlined installation and configuration process using sensible defaults. The result is an efficient load balancer that is reliable, automatically scales and is easy to manage.

For more information visit Baker Street or the GitHub repository to try it out for yourself.

SHARE THIS STORY
RELATED STORIES
How Kafka and Redis Solve Stream-Processing Challenges Lessons from Deploying Microservices for a Large Retailer Event Streaming and Event Sourcing: The Key Differences James Webb Space Telescope and 344 Single Points of Failure What Is a Microservice Catalog and Why Do You Need One?
SHARE THIS STORY
RELATED STORIES
StreamNative Integrates Kafka into Apache Pulsar-Based Cloud Limiting the Deployment Blast Radius Event Streaming and Event Sourcing: The Key Differences Why Enterprises Need a Management Plane Do ... or Do Not: Why Yoda Never Used Microservices
THE NEW STACK UPDATE A newsletter digest of the week’s most important stories & analyses.
The New stack does not sell your information or share it with unaffiliated third parties. By continuing, you agree to our Terms of Use and Privacy Policy.