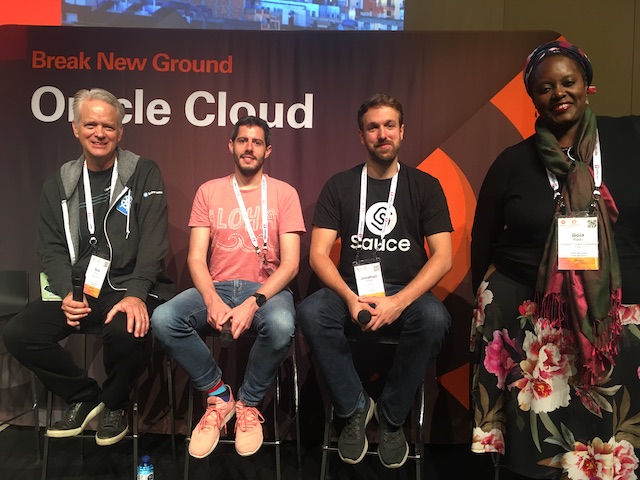 Some might assume artificial intelligence (AI) and machine learning (ML) are among the “latest and greatest technologies” that are on top of today’s hype list. Their adoption cycle — if they ever do see deployment on a large scale — is years away, one might assume. After all, software developers are really just beginning to take advantage of Kubernetes and microservices on a large scale a few years after their creation.

However, providers of AI and ML systems have begun to show how developers can already reap the advantages of the technology for their existing production pipelines for cloud native deployments in a number of ways. The concept is simple: pure AI or neural network-aided ML can assume many of what developers say are the more cumbersome, time-consuming, and ultimately, boring tasks on both the development and operations side.

The overlap between machine learning and cloud native and other themes were among the topics discussed during a panel discussion at an Oracle-sponsored pancake breakfast.

The New Stack organized the event at the KubeCon + CloudNativeCon conference in Barcelona in May. Maple syrup was also provided.

In fact, AI and ML represent another form of automation that can help DevOps “improve complexity,” Quillin said. “As we go through that sustainability and complexity improvements, we’ve got to continue to watch how people are coming along there and not leave folks behind. And that’s really, I think, where we are now as the community has jumped ahead,” Quillin said.  “And now slowly, with the managed services and all the training and all the supports coming up to help people side of it, I think technology has jumped ahead a lot really at solving technical issues, security, networking and monitoring — a lot of those are also getting better on the Kubernetes side.”

On the analyst and research front, Rotibi emphasized the importance of getting the underlying IT technologies and infrastructures before adopting ML and AI, as well as Kubernetes and microservices. “A lot of times you go in, they ask you about these new technologies, but actually, when you sort of look underneath the sort of rocks, they’re still battling with some of the old technologies and trying to get into the new way of thinking but with old, you know, ways of doing things,” Rotibi said. “So, I often say, some of these new technologies as you talk about ML and AI are mentioned a lot in the news, the reality on the ground, is that we still got some way to go. And I would say that actually, what is really important is getting the foundations right, really understanding what it is that you actually want to do, what is his that you’re tasked to do, and what actually impact that this is going to have both on your organization, and the thing that you’re going to deliver.”

Girven said his company is tasked with helping fans, such as those following the Manchester City Football Club to create branded videos to post on social media. “The video content comes in from across the world,” Girven said. “It goes into a cloud storage, and then we do a lot with Kubernetes.”

Essentially, the intelligent video editor works directly with users to help them leverage their branded videos. “They are using their phones so when the video is processing and they are expecting live updates to their touches and the editing to come back and assist them in near real time.”

In the human resources space, Kennedy discussed how Gapsquare has used agile and Scrum software development and ML to develop systems that have demonstrably helped to reduce pay gaps and other gender inequalities. He said Gapsquare has used continuous deployment to now write software and release 10 times a day. “It’s a huge cultural shift for the product people within our company, as the software is changing underneath them. The  same goes for the machine learning aspect.”

The results speak for themselves. “When we deploy a new model new algorithm, the result you got yesterday, looking at your data may have changed. Because you’ve improved your model, you’ve taken in the new factors and so it’s been a journey in terms of explaining this to our users that, ‘okay, this data set that you’re seeing is from this model and this data’,” Kennedy said. “If you want your previous results, we’re going to have to reload the [old] model for you and run it again with the old instances at work.”