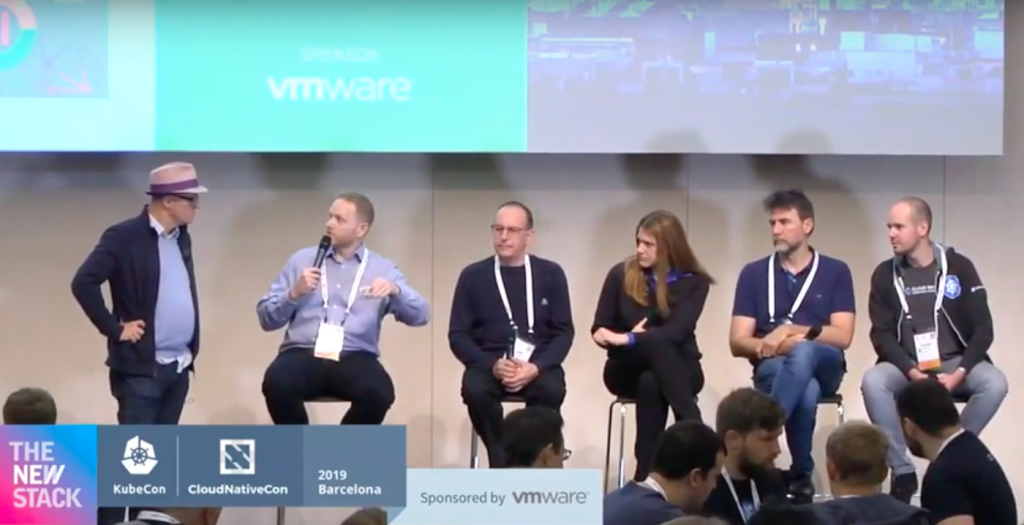 Service meshes have emerged as essential tools in managing deployments on containers and microservices. The key role service meshes were a major topic discussed during KubeCon + CloudNativeCon conference in Barcelona last week. Indeed, the announcements at KubeCon about Microsoft’s Service Mesh Interface (SMI) specification and how Solo.io has created what it calls “the first reference implementations” for SMI were arguably the most important newsworthy developments during the conference.

At the conference, The New Stack held a VMware-sponsored pancake breakfast panel discussion, captured in this podcast, about services meshes. The panelists were:

Alex Williams, founder and editor in chief of The New Stack, moderated this panel, with the help of Libby Clark, TNS editorial director.

Grossner lead the discussion by describing how “service mesh is a chance for us to rethink how we should be doing networking.” From a bird’s eye perspective, the structure of services meshes as a critical layer for cloud native platforms serves to underscore how network computing has evolved.

“I don’t want to imply that we didn’t do it right the first time. but we did it right we did it that way because of a particular time in the world where applications were monolithic — we were very device-centric and it served us well,” Grossner said. “However, today, applications aren’t monolithic as we move forward with cloud native architectures, and it seems to me a lot of the structures that we put in place to do networking, need to be rethought.”

Today, the concern is less about physical infrastructures, whether cloud or on-premise, and more about managing the services themselves and how service meshes help do that.

The meaning of networking has begun to change because instead of “identity being an IP address now identity maybe something a little bit more abstract like a certificate or a stronger identity,” Monclus said.

“Now, it’s not just an infrastructure layer that has to be there before you understand what is going to be on top, but networking is going to start serving the needs of the application in a much more dynamic way,” Monclus said.

Dudouet agreed service meshes serve to “avoid the need to know what the underlying network is.” “So, we don’t have to know about routers and switches — we just speak about services and linking things together and applying forensics,” Dudouet said. “That’s a big change from previous networking where you really had to know all the details and how it worked — and that’s really been an evolution.”

The advent of containers and the proliferation of services has set the stage for what Calcote described as “VM sprawl” and at the same time, further creating “container sprawl.”

“As you get into microservices, you end up doing something very meaningful and… bringing forward quite a few more services. And with each of those layers, new tooling has been brought forth to manage a lot of the same concerns so the service mesh It’s nuanced  but it’s a lot of concepts that we’ve known kind of all along, but is just a different type of tuning,” Calcote said, “It’s treating services as a first-class citizen on the network and it’s about creating new networks in a programmatically controlled and declarative way and having control over the network in that way and making sure that your network is really concerned about your services.”