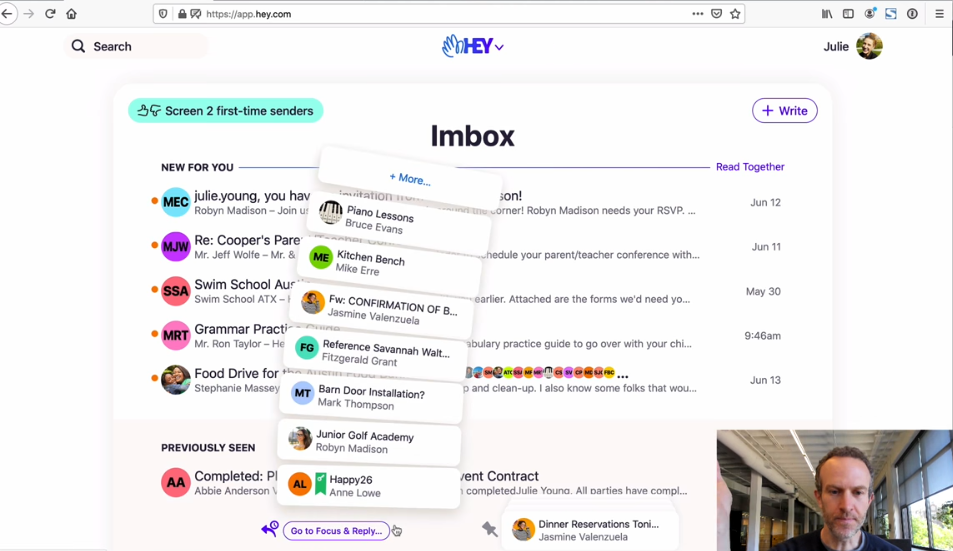 Is it possible to upgrade a communication tool that has existed for more than half a century? Or will the technology continue to be displaced by real-time messaging apps, relegated to becoming an automated storage bin for our confirmation emails and unread marketing newsletters?

This week, project management software provider Basecamp showed off its multimillion-dollar effort to re-invent email, a service called HEY. This isn’t the first high-profile attempt to re-invent email — but with some streamlining and some innovation, Basecamp has come up with a number of fresh innovations that are causing a lot of people to take a second look at this age-old Internet technology.

Basecamp has clearly put some thought into HEY’s interface — and ways to reduce clutter. For example, subject lines appears first, in bold letters, above the name of each sender, which is now the first part of the usual excerpt from the email’s first lines. It’s also possible to bundle all of a sender’s email together, so that sender still only gets one row in your inbox — and you can group related emails from more than one sender. It’s even possible to set an “Ignore” flag for an entire thread.

But more importantly, first-time senders will never appear in your inbox; instead, there’s a separate alert just above it where you have the option to approve (or not approve) them. “Screen emails like you screen calls,” reads the download page for the app’s Android version. And you can also approve them for lower levels of access — so, instead of appearing in your Inbox, they’re routed instead onto HEY’s dedicated page for receipts and confirmation emails, or to a page made from newsletters and marketing emails.

This is what’s really different about Hey’s interface: it spreads your email onto three newsfeed-like pages. Important email still appears when you check your “Imbox,” but newsletters and marketing emails are routed into a separate page in a Facebook-style column, where they’re displayed in the standard reverse chronological order. It’s because not all emails should be treated equally, HEY’s web page explains. “You don’t need to mark a newsletter, marketing email, or a shipment confirmation as read. In fact, most emails shouldn’t come with an obligation to read them, deal with them, or track their state. They’re just information, they aren’t conversations.”

A third page also offers a kind of lesser inbox called the Paper Trail for “things like receipts that you rarely need to read.”

HEY also offers a special feature, called “The speakeasy code,” that lets you give senders a code word that lets them bypass your screener and go directly into your inbox, by including the codeword in their subject line.

Even for new and important emails, there’s a “Read Together” option that opens them all up at once and displays them together in a single newsfeed-like page, one after the other, “like we’re used to reading pretty much anything else today in 2020, right?” commented Basecamp CEO Jason Fried in a presentation.

And there’s still an icon to the left with all the usual choices — Reply Later, Set Aside.

In the online tutorial, Fried also highlights another key difference: HEY doesn’t spew up a chronological list of every email you’ve received which includes emails you’ve already read, which he calls with disdain a “striping” of different kinds of emails — both read and unread. “It’s a total mess.” The Inbox page separates them into two sections — first “NEW FOR YOU” and then “PREVIOUSLY SEEN.”

This means that when all your emails new emails are read, Hey gives you the satisfaction of seeing what Fried describes as “a nice empty space.”

The company also tried to improve on the old kludge of marking an email as “Unread” so you’ll remember to reply to it later. Instead, there’s a “Reply Later” option on every email, which adds it to a virtual deck that can be pulled up from the bottom of the screen. And there’s also a second virtual pile for emails flagged as “Set Aside.” Selecting “Focus and Reply” pulls up another newsfeed-like page with the full text of every “Reply Later” email — along with a dedicated area to the right for typing that email’s reply. “Line ’em up, knock ’em down,” quips Hey’s web page.

Everything else has been streamlined down to just one menu (which Fried calls “the HEY menu.”) Above all its icons is a search window where typing in the name of a sender pulls up a special page showcasing what you’ve received from them — every email (including ones you’ve both been cc’d on), as well as every attachment. And HEY also offers a separate page showing every received file attachment. (They’re sorted by date, so the further down you scroll, the older the attachments get.) It’s also possible to filter the view by file type — images, PDFs, spreadsheets, documents — with additional filters for sender. 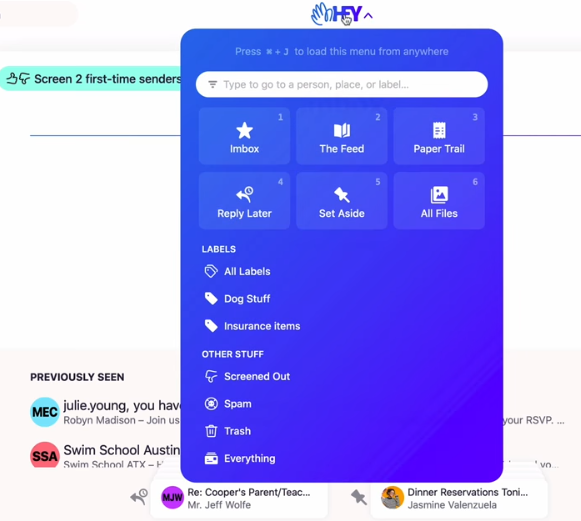 HEY also identifies emails that contain “spy-tracking pixels” activated when opened, which Fried sees as collecting information that’s “none of their business… Frankly, we think this should be illegal, but until then we’re blocking it.” They do this by “proxying” the images — downloading the images to a HEY.com server instead.

And they’ll also use their servers to host files you’re sending — even very large files that other email services might refuse as an attachment. “Just attach the file and we’ll send the recipient a direct link to download it,” explains their web page.

What It Won’t Do

One thing HEY won’t do is import all your old email from another account — “because we believe a fresh start is a blessing, not a curse.” But you can import contacts (if they’re in the vCard format). And if you cancel your account, you can export your email and contacts to your next email app. (They’ll also forward along any emails sent to your Hey.com account.)

It’s also not possible to automatically append a “signature” footer to the end of your email showing your name and phone number. (“Don’t contribute to footer crap,” argues their manifesto. “The email already says it’s from you. If someone needs your phone number, they can ask.”)

And you’ll never waste a moment archiving email — because there is no archiving. “When you read an email, it just moves down, and, eventually, moves off when newer emails come and take its place,” explains its manifesto. “In HEY, emails just flow, they don’t pile up. Let go.” While Gmail limits your storage to 15GB, HEY gives you 100GB.

And the company is proud of its security features. All customers are required to use two-factor authentication, and it also supports hardware security tokens like fingerprint readers and USB Keys. The FAQ also explains that “HEY’s database (which holds your email) is encrypted both at rest and at work, which means our technical team can access the database for service, support, tuning, and forensics, without giving them access to people’s actual emails. HEY is not end-to-end encrypted (we still hold the keys), but otherwise it’s as locked down as can be.”

HEY offers 14-day free trials — though then the only billing option is one year for $99. (Although their FAQ also acknowledges the scenario where a customer cancels and then requests a refund.) If you cancel before the free trial is over, your email address gets “recycled” after 30 days and made available to someone else.

And there’s special pricing for those precious two-letter email addresses. There’s 676 of them, and Hey says those rarest-of-the-rare addresses will cost $999 a year. The 17,576 three-letter email addresses cost $375 a year. Basecamp’s co-founder and CTO David Heinemeier Hansson “jokes that its premium address offering is how it will help pay off the huge sum of money it forked over to acquire the Hey.com domain last year,” the Verge reported.

There have been other attempts at re-inventing email. An app called Mailbox offered included swipe-based filtering for “snoozing” an email to read later (or to delete it altogether), according to a 2013 article in the Verge.

Created by Orchestra Inc., the company’s founder remembered his investors telling him that “Going after email is a road paved in corpses,” according to the Verge’s article. “It’s not a space you go after as a little startup.” Its paradigm seemed to be making email threads feel more like a text-message chat, turning emails into what the Verge described as “SMS-like bubbles.” And proving their investors wrong, in any case, it was acquired in 2013 by Dropbox for $100 million, the Times remembered. But within two years, Mailbox was writing its own obituary, telling users to look elsewhere for an email solution. “As we deepened our focus on collaboration, we realized there’s only so much an email app can do to fundamentally fix email. We’ve come to believe that the best way for us to improve people’s productivity going forward is to streamline the workflows that generate so much email in the first place.”

There was also the iOS email app “Sparrow,” which launched in 2011. Its paradigm was apparently Twitter. (In a 2011 interview with Ars Technica, Sparrow’s creators acknowledged Twitter was a major influence on their own UI. The creators ended development 2012 after the company was acquired by Google.

The Problem with Email of Today

But is email itself a dying medium? The New York Times’ lead consumer technology reporter recently wrote that most of his online conversations are now happening on live messaging apps like Slack, Google Hangouts, and iMessage. The director of market insights at App Annie confirms to the Times that people younger than 45, in general, are spending more of their time on messaging apps.) The Times reporter notes that “My email accounts have turned into a passive channel for receiving receipts and newsletters.”

Right now HEY’s app is embroiled in a fight with Apple’s app store over revenue-sharing, a fight that found Microsoft appealing to antitrust regulators to look at how other companies were running their app stores. Hansson tweets that he’s spoken to the Department of Justice’s antitrust division.

But HEY’s larger problem may just be convincing people to take a chance on a re-designed email interface – and not everyone is sold. The New York Times’ lead consumer technology writer concluded HEY “has a way to go,” calling it “a thoughtful first step,” but a tad pricey at $99 a year.” He’d struggled with how to block a company’s promotional messages without also blocking important messages from the same company — though he also conceded he “thoroughly enjoyed” other features like the Paper Trail…

“What’s more, I walked away convinced that email as a whole is so broken that many of us have taken most of our conversations elsewhere.”

But on Twitter, one of Chen’s readers picked up on a detail: that Chen said he had 118,000 unread email messages.

“With 118,000 unread email messages there is no software that will be able to help you. Just delete it all or get a new email address!”