Basic Phone Provides a Respite from the Always-Connected Lifestyle 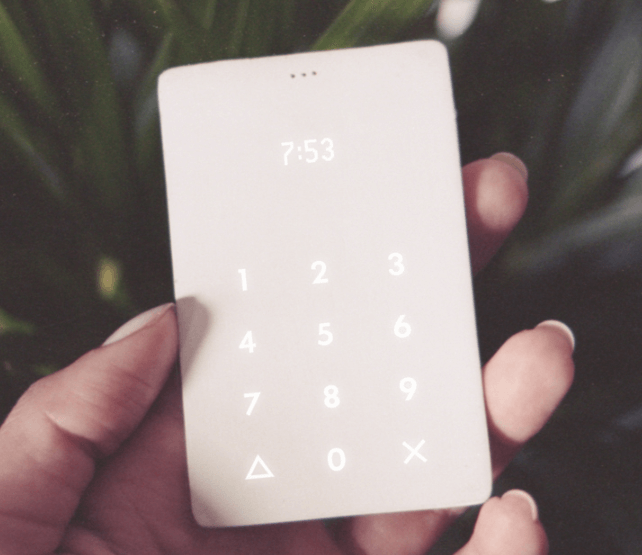 After decades of evolving devices and social media services that help people connect, what if people decided to just stop using them?

There’s a strange new trend in our changing world. Some users are clamoring for less powerful phones.

“It was a reaction against being glued permanently to my iPhone during waking hours,” British actor Eddie Redmayne told The Financial Times, in an article describing a growing band of smartphone refuseniks.

About 44 million “basic” phones were sold in 2015, according to the research group Strategy Analytics. That’s 2 percent of all phones sold, and they add that analysts now expect increases in the number of “second phoneys” — users who switch to a smaller inexpensive phone when they’re away from their desks.

This June a new company will begin shipping a stylish credit card-sized calls-only phone catering specifically to this market. Co-founded by a 25-year-old skater, Light Phone is billing its portable device as the world’s thinnest phone — just 4.5 millimeters, which is “ideal for being active or for when you don’t want to risk losing your expensive phone.”

In a comprehensive web page, the company ticks through the reasons why people in this emerging movement might want to own a less-powerful phone. Their $100 device is a perfect “first phone” for children — or as a backup phone in case your main phone breaks. “Because things always break,” The website not unreasonably argues.

The Light Phone suggests one possible form factor for the “dumb phone” world yet to come. It can be used as its own stand-alone phone, but also as a second phone, receiving calls forwarded from your regular smartphone by a special app, allowing both phones to share the same phone number. “Turn on call forwarding, leave your other phone at home. Enjoy the day free of distractions. Never miss a call from mom.,” the site urges us to imagine. Costing just $100, the unlocked GSM phone will ship with a nano-SIM card slot and a micro USB port.

The company site describes the phone’s features in a way that’s almost a manifesto for a new “phone simplicity” movement.

“Simple contact without unwanted rings, dings, or pings… Designed to be used as little as possible… There are times where you don’t need a computer in your pocket, where you’d be actually much happier without one. ”

A promotional video even captures the hip Light Phone experience

Last spring the Light Phone received a burst of positive press from Wired, Fast Company, and Time, helping the company raise $415,127 on KickStarter from 3,187 backers.

Demographers have started reporting with surprise that millions of young people are abandoning services like Facebook for more private person-to-person interactions online — and that’s not the only change.

Felicity Duncan, Assistant Professor of Digital Communication and Social Media, Cabrini College, noted in the Conversation news discussion site that she had noticed the students in her Digital Media class weren’t checking any of the “public” social media like Twitter, Instagram, or Pinterest. Instead, they’re using group texts or chatting individually with friends using Facebook’s messaging client. Or reading their Stories on Snapchat, which are automatically deleted after 24 hours.

Two years ago Time magazine reported that more than 11 million young people had abandoned Facebook since 2011. Citing a study from iStrategy Labs, they reported that within two years, Facebook lost nearly 7 million college-aged users — and more than 4 million high-school aged users. Back in 2013, one C|Net columnist wrote that for teens and tweens, Instagram and SnapChat had become “the opposite of Facebook: simple, seemingly secret, and fun.”

It’s a reminder that even in our busy world, there’s always one additional option remaining: to unplug.

“Just as young people were the first to migrate onto platforms like Facebook and Twitter,” Duncan wrote, “they may now be the first to leave and move on to something new.”

SHARE THIS STORY
RELATED STORIES
Case Study: How Dell Technologies Is Building a DevRel Team Slack: How Smart Companies Make the Most of Their Internships Hacks to Help Open Source Leadership Support Inclusion Engineering Leaders: Switch to Wartime Management Now There Is No Shame in Customer-Reported Incidents
SHARE THIS STORY
RELATED STORIES
Devs and Ops: Can This Marriage Be Saved? eBay: Betting on Open Source Is Great for Your Business There Is No Shame in Customer-Reported Incidents Collaborating with Internal Dev Experience and Tool Teams Low-Code Tools Improve Devs' Work-Life Balance, Survey Finds
THE NEW STACK UPDATE A newsletter digest of the week’s most important stories & analyses.
The New stack does not sell your information or share it with unaffiliated third parties. By continuing, you agree to our Terms of Use and Privacy Policy.