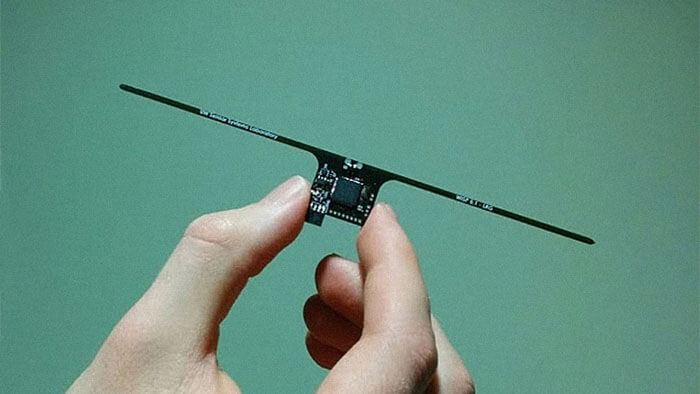 The array of handheld, portable technology, and wearable gadgets available today is mind-boggling. Manufacturers typically try to shrink their designs as much as possible, but device size is ultimately limited by the batteries, all of which have a certain capacity before they run down and must be recharged again, making it a challenge for designers to balance battery life with function and aesthetics.

But if scientists working with wireless power sources are successful, batteries may someday be eliminated altogether to create a new generation of battery-free devices. So far, we’ve seen promising research with power harvested from the ambient backscatter of wireless signals, sensors powered by body heat and microchips operating on “biocells” fuelled by the same processes that propel living cells. But many of these devices are slow, and can’t be reprogrammed once deployed.

Now, scientists at the Technical University of Delft and the University of Washington’s Sensor Lab have developed a battery-free system equipped with a sensor and microchip, which can be powered entirely by radio waves and is up to 10 times faster than similar ambient-powered devices. Best of all, in contrast to similar devices, it can also download executables, allowing it be reprogrammed whenever needed.

The project, which has been in development since 2006, is dubbed WISP, or Wireless Identification and Sensing Platform, and is one of the emerging computational RFID (CRFID) technologies now available. In particular, WISP is capable of being powered passively by converting radio frequencies emitted by conventional RFID (radio frequency identification) readers — the same machines seen at retail store entrances — into electrical power.

The project’s latest accomplishment is the addition of Wisent (short for “wirelessly sent”), a faster and more reliable downstream communication-oriented protocol for CRFIDs that can tolerate fluctuations in operating power. “The novelty of Wisent is its ability to change adaptively the frame length sent by the reader, based on the length throttling mechanism, to minimize the transfer times at varying channel conditions,” writes the team in their research paper. “Wisent enables wireless CRFID reprogramming, demonstrating the world’s first wirelessly reprogrammable (software defined) CRFID.”

The WISP is constructed out of an open source, open architecture EPC Class 1 Generation 2 RFID tag that incorporates a fully programmable 16-bit microcontroller, in addition to any add-on sensors. It differs from ordinary RFID tags as it is programmable, and can be multi-functional.

“Unlike the WISP, conventional RFID tags are black boxes that cannot execute arbitrary computer programs, and do not support sensors,” the researchers explain. “We have given WISPs to collaborators around the world. Many of the applications have been sensing related, but we were also surprised to find many applications in the areas of cryptography and security, enabled by WISPs programmability.”

Of course, it’s nowhere near as powerful as a smartphone or laptop computer yet — but the WISP could still be extremely useful in situations where low-power, battery-free sensing, and computation are needed.

“It’s not going to run a video game, but it can track sensor data, do some minimal processing tasks, and communicate with the outside world,” researcher Aaron Parks of the University of Washington, told Fast Company. “Imagine if your wallpaper could run apps, or change color to match your lighting, without having to wire it into anything. That’s not out of the question anymore.”

The team believes that WISP-based devices could also be used for monitoring the structural integrity of buildings in earthquake-prone areas, where replacing a multitude of wired sensors running batteries may be a logistical nightmare. Sensor-enhanced agriculture may also be a possibility, to increase efficiency as well as crop yields.

WISP technology could also be particularly effective as medical devices, as next-generation pacemakers or as implants for monitoring blood glucose, which would no longer need batteries for their long-term function. The team tested the possibility of creating a reprogrammable tissue-embedded CRFID by wrapping a WISP in plastic film. Six layers of bacon were then placed on each side to emulate an implant embedded under the skin and placed a short distance away from an antenna. “We were able to successfully reprogram the WISP with complete RFID stack within 63.55 sec despite attenuation of the backscatter signals from the meat,” wrote the team.

The researchers are now working on a way to transfer data securely to multiple CRFID tags, as well as data compression and a method to resume transfers in the event of a failure. So while battery-free and powerful laptops may be a long way off, the technology could soon be used for connecting reprogrammable objects to the growing Internet of Things.

Read more over at the WISP Wiki.

SHARE THIS STORY
RELATED STORIES
Poisoned Lolip0p PyPI Packages FAA Flight Cancellations: A Lesson in Application Resiliency How to Get Started Filling 3.4 Million Cybersecurity Jobs A Platform Team Product Manager Determines DevOps Success 5 Security Principles to Guide Your DevSecOps Journey
SHARE THIS STORY
RELATED STORIES
State of the API: Monetizing API Deployment Is on the Rise Crypto Winter Puts Dampener on Web3 Developer Growth Google Brings Rust into Chromium Project A Platform Team Product Manager Determines DevOps Success Generative AI: How Companies Are Using and Scaling AI Models
THE NEW STACK UPDATE A newsletter digest of the week’s most important stories & analyses.
The New stack does not sell your information or share it with unaffiliated third parties. By continuing, you agree to our Terms of Use and Privacy Policy.