The Beach-Walking Beasts of Theo Jansen 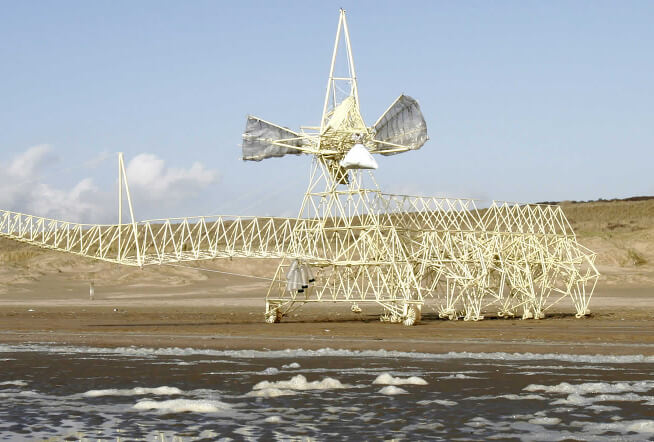 “The walls between art and engineering exist only in our minds,” explains Theo Jansen, who for more than 25 years has been building enormous creatures out of plastic PVC pipes. And this weekend they’ll walk the earth again — the final stand for a three-month stay at San Francisco’s Exploratorium, in a traveling exhibit titled “Strandbeest: The Dream Machines of Theo Jansen.” As they’re strolling into our memories, we learn that Strandbeest is a Dutch word for “Beach Animal” — and that the project has a long and fascinating history.

“Each generation of his Strandbeests is subject to the forces of evolution,” notes a web page at TED.com, “with successful forms moving forward into new designs… They even incorporate primitive logic gates that are used to reverse the machine’s direction if it senses dangerous water or loose sand where it might get stuck.”

Jansen was apparently inspired by “The Blind Watchmaker” by Richard Dawkins, a book that argues that evolution, while non-random, is continually proceeding forward without an ultimate destination in mind. Jansen first began experimenting with evolutionary models on an Atari computer, according to the New York Times, and had spent several months comparing every possible length for the rods that make up his creatures’ legs, in an evolutionary contest of his own, a mathematical head-to-head in which a magically perfect set of numbers finally emerged victorious.

“[E]ven for the computer the number of possible ratios between 11 rods was immense. Suppose every rod can have 10 different lengths, then there are 10,000,000,000,000 possible curves. If the computer were to go through all these possibilities systematically, it would be kept busy for 100,000 years. I didn’t have this much time, which is why I opted for the evolutionary method. Fifteen hundred legs with rods of random length were generated in the computer. It then assessed which of these approached the ideal walking curve.

Out of 1,500 permutations, the computer selected the best 100. These were awarded the privilege of reproduction. The computer was on for weeks, months even, day and night. It finally resulted in eleven numbers denoting the ideal lengths of the required rods.”

Jansen’s fond explanations are as much a part of the exhibit as the creatures themselves. “In the middle of each beach animal is a kind of spine, more specifically a crankshaft,” he writes on his web page. “The remarkable thing about this spine is that it can rotate… The beach animal doesn’t lurch…”

But it doesn’t end there. Jansen’s creatures also have a stomach of sorts. The wind on the beach powers bicycle pumps that are built into the creature, storing energy (in the form of air pressure) deep within the belly of the Strandbeest. “Take off the cap and the wind will emerge from the bottle at high speed,” Jansen explained on another web page. “The trick is to get that untamed wind under control and use it to move the animal.”

But beyond the technical explanations, Jansen’s beach-walking creatures are just beautiful…

The New York Times describes Jansen as “something more like a cross between Leonardo da Vinci and Don Quixote (with maybe a smidgen of Sisyphus thrown in for good measure)”. And they also describe the hassle he had shipping the monstrosities, carefully folding them into 40-foot containers, and how his tour manager renamed some of the components —  like “strangle rods” and “middle foot bones” — to avoid suspicious questions when they passed through customs.

The beasts have been to Japan, Australia, South America, according to the Times, and they’ve also prowled London, Paris, Madrid, and Taipei, and toured several cities in the United States, namely Salem, Chicago, and now San Francisco. “And everywhere they go, visitors will be subjected to Jansen’s soaring contention that what they are witnessing is, in fact, nothing less than a new form of life…”

This wasn’t the only project in Jansen’s delightfully quixotic career. On his web site, Jansen describes a 1980 project which involved building a UFO. He filled one with helium, flew it over over the Dutch town of Delft, and “caused a near-riot,” according to his web site. It was 13 feet wide, projecting light and sound to all the earthlings down below from the hazy sky overhead, though it was later described as nearly 100 feet wide — in official police reports. “We never found it again,” Theo wrote wistfully on his web page. “It disappeared in the clouds, and probably landed in Belgium.”

Another project involved dangling an electric drill from a 145-foot cord suspended between two buildings near the Hague. The drill’s bit was replaced with a propellor, causing it to move wildly through the air, tracing strange and complicated patterns. 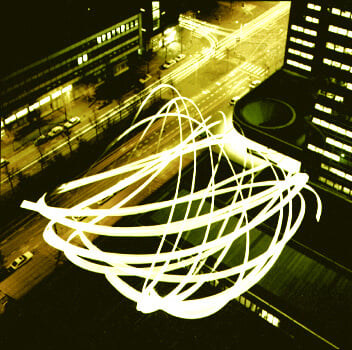 But it’s the Strandbeests that people seem to remember. Jansen’s 2007 TED Talk in Monterey, entitled “My creations, a new form of life,” has now been viewed more than 3 million times. And his beach-striding creatures are apparently being immortalized in a documentary.

As TED points out, “Jansen’s vision and long-term commitment to his wooden menagerie is as fascinating to observe as the beasts themselves.”

SHARE THIS STORY
RELATED STORIES
Why Your Code Sucks: Common Excuses for Bad Programming Wellspring of Creativity: Why Public Domain Matters Snack Stack: Turning Winter Comfort Food up to 11 2022 in Review: AI, IT Armies, and Poems about Food How to Get Started Filling 3.4 Million Cybersecurity Jobs
SHARE THIS STORY
RELATED STORIES
Platform Engineering Won’t Kill the DevOps Star How Jit Builds a Platform Engineering Mindset in the Cloud 2023 Will Be the Year FinOps Shifts Left Toward Engineering How Will Working in Tech Change in 2023? How Not to Waste a Senior Hire
THE NEW STACK UPDATE A newsletter digest of the week’s most important stories & analyses.
The New stack does not sell your information or share it with unaffiliated third parties. By continuing, you agree to our Terms of Use and Privacy Policy.