A majority of developers surveyed say the bear market is peaking their interest in Web3, finds a recent study by a development tools firm.
Oct 24th, 2022 8:44am by Loraine Lawson 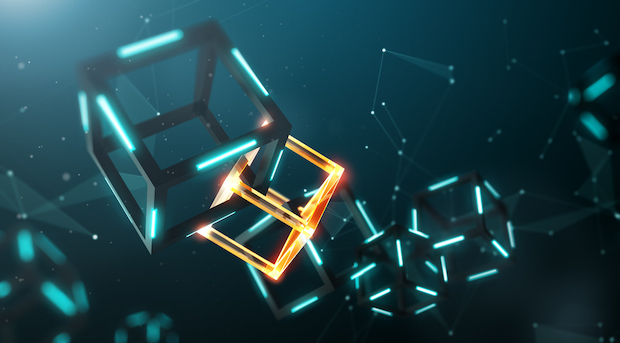 Bear markets may play havoc with investors, but an unusual side effect of this bear market is that it has increased developers’ desire to build in Web3. At least, that’s the finding of a recent developer survey by Hiro, which offers developer tools for building on Bitcoin. This is the second time this year Hiro has surveyed its Stacks developer community. 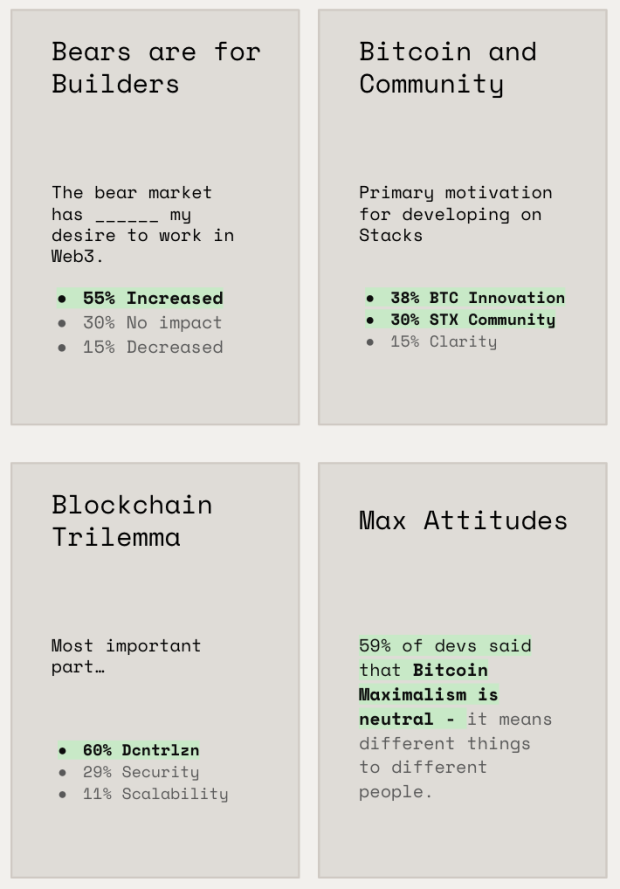 As for those who are already working in Web3, the survey found that 31% are employed full-time, part-time or self-employed in the space.

The increase in interest tracks with a Jan. 2022 survey by VC firm Electric Capital, which also found new developers are flocking into the Web3 space (although that was before the bear market hit). That survey reported that 34,000 new developers contributed to an open source crypto project in 2021 — the highest number of new entrants since 2018.

The Jan. study identified 18,000 active developers in Web3, as determined by the number of developers who submit code into open source crypto and Web3 projects at least once a month. In the report, The New Stack noted that the “total number of Web3 developers is likely higher, because the report doesn’t count work on proprietary projects.”

Ecosystems: Who’s the Loveliest of All?

Stacks is an open source network of decentralized apps and smart contracts built on Bitcoin and is used to develop smart contracts. The Hiro survey found that nearly half — 126 — were involved with the Stacks ecosystem.

“The desire to innovate on Bitcoin and the strength of the Stacks community were the clear top motivations for developing on Stacks,” Hiro concluded in a release about the survey. 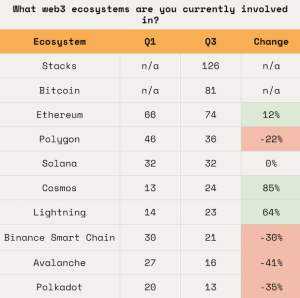 The first quarter survey did not ask about Stacks or Bitcoin. This recent study found that a majority — 57% — have been active in Stacks less than one year.

After Stacks, Ethereum remained the most popular blockchain for Hiro’s developer community — although the report pointed out that most developers try multiple ecosystems. One change over Hiro’s Q1’s report, which garnered 248 responses, was a 12% growth in the Ethereum platform, 85% growth in Cosmos and 64% growth in Lightning. Developer involvement with Polygon, Avalanche, Polkadot, and Binance Smart Chain decreased significantly, while Solana stayed constant over the two quarters. Eighty-one developers said they used Bitcoin.

Ethereum also ranked highly in the Electric Capital study: Over 4,000 (22%) of monthly active open source developers said they worked on Ethereum, with the next highest being the 680-plus people who developed on top of the Bitcoin blockchain. Polkadot, Cosmos and Solana also ranked in the top five blockchain projects for Web3 development.

There Can Be Only Two

The blockchain trilemma is the idea that there can be two out of three characteristics in a blockchain: Decentralized, secure or scalable. Sixty percent of developers responded that decentralization takes priority. Security rated 29%, while only 11% identified scalability as the priority.

Non-fungible tokens (NFT) and decentralized autonomous organizations (DAOs) are the most popular categories for these builders — which did not change since Hiro’s first quarter survey in 2022. 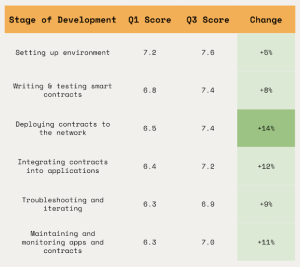 The company credited the change to improvements it made to Clarinet, an opinionated workflow for Clarity; the Stacks API; and other tools used by developers.

SHARE THIS STORY
RELATED STORIES
Devs Are Excited by ActivityPub, Open Protocol for Mastodon Software Developer Tool for Quantum Computers Launching Soon How Web Tech Got This Way and How It May Evolve in the Future Jamstack Panel: How the Edge Will Change Development Accessibility Is Just Another Functional Test
SHARE THIS STORY
RELATED STORIES
Survey Finds Majority of Jamstack Community Testing Edge How Instagram Prepared for High Definition Video The Latest Milestones on WebAssembly's Road to Maturity Service Simplifies Natural Language Processing for Developers Software Developer Tool for Quantum Computers Launching Soon
THE NEW STACK UPDATE A newsletter digest of the week’s most important stories & analyses.
The New stack does not sell your information or share it with unaffiliated third parties. By continuing, you agree to our Terms of Use and Privacy Policy.