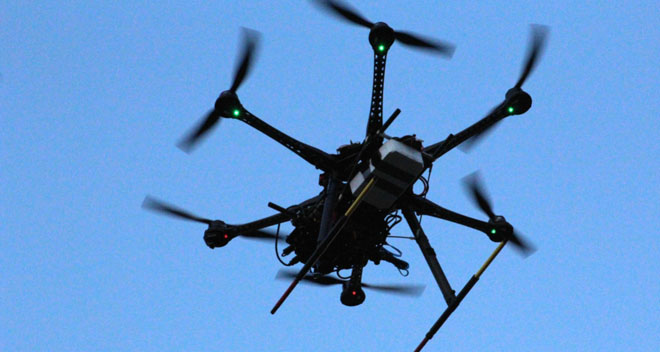 It has come to pass: Robots are taking over. And they’re learning to adapt from mother nature.

From exploring asteroids, to building homes on the Moon, to running hotels and potentially performing surgery someday, autonomous robots of all stripes are now being developed for many situations that might have once required human endeavor.

For one thing, good old-fashioned, labor-intensive farming seems like one of those last bastions of human usefulness — though traditional farms have admittedly gone through enormous changes in the last century, thanks to mechanization and the introduction of chemicals.

But the next agricultural revolution may very well be a robotic one. As many industry observers are pointing out, “precision farming” robots might be the future answer to a growing labor shortage, and to shore up declining production and efficiency — much of it brought about by lack of arable land, environmental degradation, climate change, water shortages, crop diseases and bee colony collapse disorder. These impending agricultural crises are what the University of Pennsylvania’s General Robotics, Automation, Sensing & Perception (GRASP) Laboratory wants to tackle with their experimental robots. Inspired by bees, these autonomous, unmanned aerial vehicles (UAVs) would help farm owners optimize their yields like never before, by using various onboard sensors, cameras and laser-range scanners that allow them to gather data. The data would allow farmers to map, model and effectively manage every aspect of their operation.

Robot swarms behave like swarms of animals in nature, where individual organisms will independently respond in context to its neighbor and to its environment, but within a decentralized, self-organized system.

Remarkably, these lightweight, quadrotor machines can also work collectively as an “artificial robot swarm,” without human input, thanks to the team’s algorithms based on what is called swarm intelligence. These algorithms are modeled on how swarms behave in nature, where individual organisms will independently respond in context to its neighbor and to its environment, but within a decentralized, self-organized system of aggregation and cooperation that can continue functioning even if one of its parts fails.

It’s the kind of behavior you see reflected in groups of fish, flocks of birds and colonies of bees, and it’s these algorithms that are crucial to managing large, complex networks of robots that sense, communicate and compute. These robot swarms would be distributed over a farm or orchard, collecting data like the number of plants and their fruits, so that the farmer can estimate total yields, optimizing the production chain. Three dimensional models of plants and their canopy size can be generated, allowing producers to know how much “leaf area” there is on each plant available for photosynthesis, which gives an indicator of how healthy each plant is.

Data from the robot swarm’s visual and infrared sensors can be collated to form an image showing the farm’s normalized difference vegetation index (NDVI), which gives a “big picture” of the crop’s general health, or alert growers directly when diseases like chlorosis occur in a certain section. Each plant can be mapped and modeled to determine its total leaf area available for photosynthesis. Data from visual and infrared sensors combined into an image showing general health of orchard.

In a recent TED talk (embedded below), Vijay Kumar, engineering professor and dean and who heads GRASP’s research on quadrotors and collective behaviors in robotics systems, explains in depth how these diminutive, yet powerful, machines work.

Size matters — and here, small is best, though researchers are still trying to find the sweet spot that would balance size with energy-efficiency, and other factors like speed and response times. As Kumar explained:

Smaller is better, because along with the small size you get lower inertia. Along with lower inertia, you’re resistant to collisions. And that makes you more robust. So just like these honeybees, we build small robots. And this particular one is only 25 grams in weight. It consumes only six watts of power. And it can travel up to six meters per second. So if I normalize that to its size, it’s like a Boeing 787 traveling at ten times the speed of sound.

Distribute a whole bunch of these little critters over an area, and you’ve got a efficient, robust autonomous system that can scale up — way up, for any size of farm, from small acreages to the factory-like mega-farm. If these precision farming robots are developed with affordability in mind, they may become a cheaper option for small farms in developing countries for whom large, expensive equipment would be unnecessary and out of reach.

Kumar and his team estimate that precision farming robots could increase yields by up to 10 percent, and reduce inputs like water, fertilizer and pesticides by a whopping 25 percent. In a world where the agricultural sector is by far one of the largest users of freshwater, this makes an enormous difference.

But precision farming may not end at harvesting and data collection. As massive numbers of bees continue to mysteriously die off, robotic pollinators like Harvard University’s Robobees may be deployed someday to pollinate our crops or dispatch microdots of pesticides. Nature conservation in inaccessible areas may be another possibility, as robotic swarms of robots could be orchestrated to rebuild damaged deep ocean habitats, monitor pollution or be used in dangerous search-and-rescue operations where human lives are imperiled.

But as with any technology, there’s a potentially dark side, such as “microdrones” that can be used to enter private homes to surveil people, or mini-robot assassins that can offload biological weapons instead of pesticides. Tellingly perhaps, much of GRASP’s funding for micro UAV research in the last decade has come from the US Department of Defense. There’s no doubt that with any technology, especially with robotics, there’s a good chance that it most probably will be used in some form for military purposes.

One thing is for certain, though: robots are here to stay. As robotics research evolves, we will surely see more of these adaptive, swarm strategies being used to cope with pressing problems like health, environmental conservation and food security. However, it remains to be seen whether they will be used for humanitarian purposes, or ultimately used as more lethal agents of destruction.