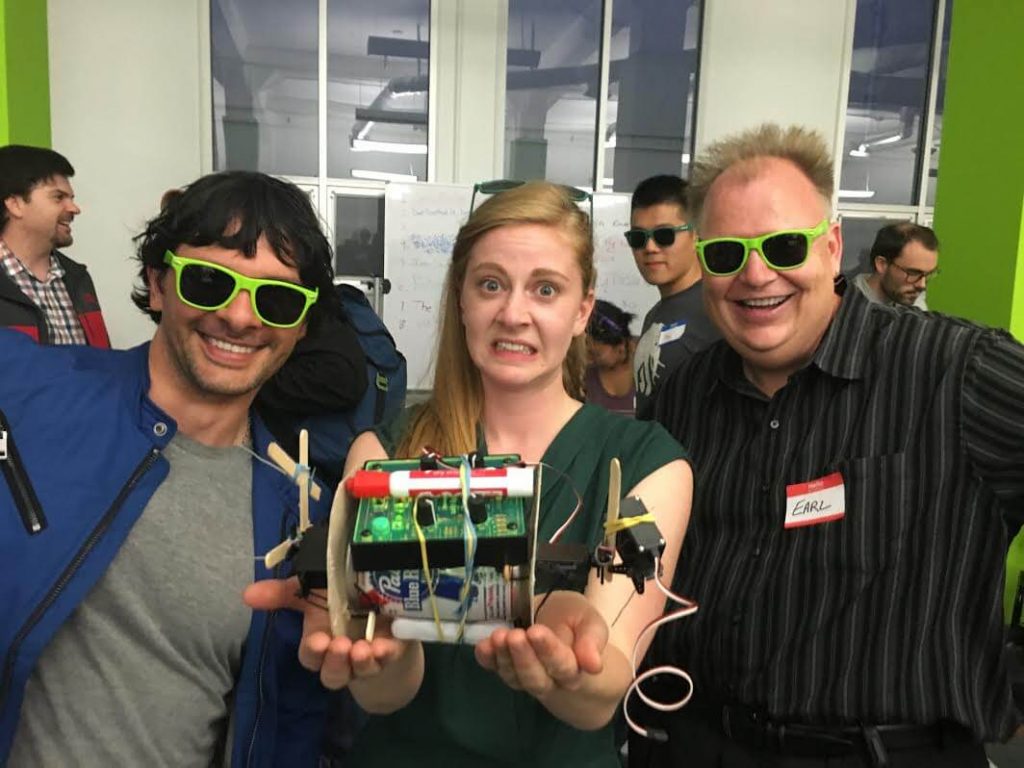 This week, geeks came together in San Francisco for Simone Giertz’s Awesome Bad Robot Build. The Beer and Build was sponsored by Ericsson as part of the Intel Developer Forum 2016. 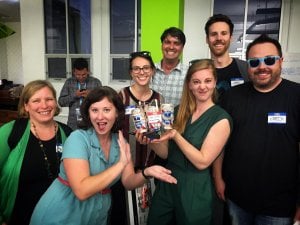 “Sounded like fun,” said Earl Ruby, principal software engineer at Apcera, a cloud-as-a-service company that fielded two teams in the competition. “I heard something about beer and building robots and said ‘I’m in.’”

“It was very lord of the flies, but with beer,” said Justin Brinkmeyer, senior designer at Apcera, who was part of the team that constructed the winning bot.

Ericsson just opened up an office in SF and decided to announce its presence in a big way at the by sponsoring the robot build during IDF 2016. The company brought Giertz, who is currently reigning as the self-proclaimed “Queen of Shitty Robots.” This may seem like an odd fit, but she’s the IRL great-great-granddaughter of Ericsson’s founder, Lars Magnus Ericsson.

Giertz has an enormously popular YouTube Channel where she builds shitty robots and puts the fun back into invention. Her “How to Cut Your Hair using a Drone” and “Just Deal With It” robot episodes are particular favorites, garnering hundreds of thousands of views. And why not? She’s quirky, funny, talks randomly about her life and builds robots with practical purposes.

Open I made a robot to help you DEAL WITH IT on YouTube.

She presided over the Beer and Build competition, where she spoke about how she got into bot building and displayed a few of her creations. According to Brinkmeyer, she told the crowd she wanted to build something that would solve a big problem, but it was frustrating. Then she decided just to build robots with style and not be worried about how well they worked. After all, it’s the building process that is the fun part. And a year later she’s known worldwide.

After the inspiration portion of the evening, the attendees broke up into teams and were given ground rules, a box of parts and 40 minutes. There were no instructions and just three rules. The robot had to move two feet, it had to have a name, and it had to move with style.

The cans still contained beer, so the first order of business was to drain the beer as quickly as possible. Brinkmeyer was the designated beer removal expert on his team. While he was busy with that task, his teammates Peter Miron, Christopher Casper, and Pam Conrad started drawing things out, trying to figure out what to do with the given bot parts.

They started playing with popsicle sticks and rubber bands, then Casper, the engineer of the group, picked up the motors and starting affixing popsicle sticks to the servo motors.

They ended up with a 3-legged, beer-can robot with one can as the center or body, and the other two cans making ‘legs’ and creating the motion.

By now, the beer cans were empty, but how to affix beer cans with no tools? There were no screwdrivers so that they couldn’t poke holes in the cans. Conrad, the accountant of the group, introduced the idea of using a flattened beer can as a sled for the center can, which gave the bot stability. This was ingenious, said Brinkmeyer, because created the balance needed to keep it from tipping over, which all of a sudden made the bot viable. He then jumped into the build and created robot feet with popsicle sticks.

According to both Ruby and Brinkmeyer, the real challenge was in the motors.

“Servo motors don’t go round and round, they only go back and forth,” said Ruby, “so you had to figure out how to make the back and forth transfer into a forward motion.”

Ruby and his partner Aleksey Tkachenko created the only completely autonomous robot, containing the control and power supply all in one, which they descriptively named “Rolling Twitch.” Sadly, it didn’t win. 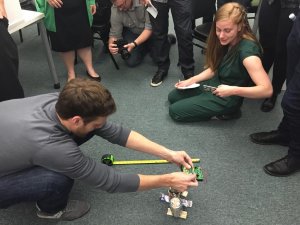 Brinkmeyer’s team hit upon the idea of making the bot walk like R2D2 using both legs at the same time. Using the two legs in tandem gave the bot enough torque to get it forward. This was their eureka moment!

Once they got it on the carpet, it started working, which, Brinkmeyer said “was kind of shocking. We got it to walk in a straight-ish line.”

Unlike Rolling Twitch, PBR needed a driver. After the team had figured out how to drive the bot with the controls, Brinkmeyer was nominated. “Probably,” he said, “because I had the most beers.”

The initial 40 minutes, was extended to an hour, which included drinking the beer. Brinkmeyer described the pace as “fast and furious.”

At the end of the extended time, Giertz watched each bot lurch across 2 feet of carpet and declared PBR (Pretty Bitchin’ Robot) the winner.

Each member of the winning team received a Bionic Bird, a flying bot controlled by an iPhone app. Brinkmeyer took his back to the office, where he was asked not to fly it because of worry it would harm the sprinklers. He’s resigned to wait until the weekend to test it out at a park.

Apcera and Intel are sponsors of The New Stack.

The New Stack is a wholly owned subsidiary of Insight Partners, an investor in the following companies mentioned in this article: Bionic.